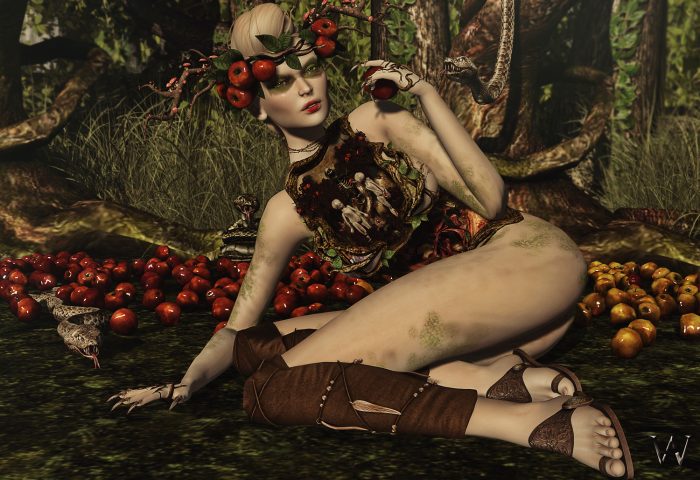 I am not uberly religious, but some themes, which as well are shown in arts again and again, do catch my attention sometimes. I more believe in nature and the power of even that, instead of the church for example. Religion or the believe in god, spirits and ghosts are something very personal and we all have different experiences with that, so I would never ever try to convince anyone of my own opinions about that. I do believe in the thought, that energy never goes away completely (Conservation of Energy) and always gets transitioned into something else 😉

For me tings like the Wiccan cult – or some older forms of nature based believes – are way easier to believe in than god or even the church. There was a time, where I did believe in god and as well the church, but that did end with the death of my father when I was 7. He died because of stomach cancer and all I wanted to know – when I was 7 – was “Why?”. Why would that god, that I did believe in, allow that a disease would be able to take my father from me, when I still needed him so much. There was a group for kids at the church, which I was attending every week and after my father passed away I wanted answers. They had none besides the one the church always uses, if they can’t explain something – “The paths of God are inscrutable”. Tell that a 7 years old girl, which is kinda ripped apart – not really working out well. That was my first disruption I had with that. Later, when I did grow up and started to try to get to the bottom of everything I was told and what I learned, it became even worse… I questioned why god would let it happen, that in a war innocent babies get killed – after I they tried to convince me, that war is nothing god does, but the humans as all have their own ability to make decisions – babies who can’t even walk, talk, speak nor make any kind of deliberately decisions.

I read the bible – more than once, as I wanted answers and I wanted to understand – and the more I read, the more I again questioned so many things… for example, how can I believe in a god that breaks his own ten commandments in the bible? How can I believe in a god, that allows humans to murder in his name? I was taught god is good! I learned I never will get answers more than “God must have his plan” or like I said before “His ways are inscrutable”- which was not enough for me, as I always want to go to the bottom of things. Maybe that is the reason why I personally prefer science and nature over religion itself.

Like I stated at the beginning, for me it is way easier to believe in the power of nature. Nature is very rational and there are proves, that some things do happen as we see it everyday. There is stuff between heaven and earth, not all will notice – or not all will/want to understand. So everyone has the freedom to decide, what he or she wants to believe in Germany, which is something I highly value. I know it is not a matter of course everywhere in the world sadly. 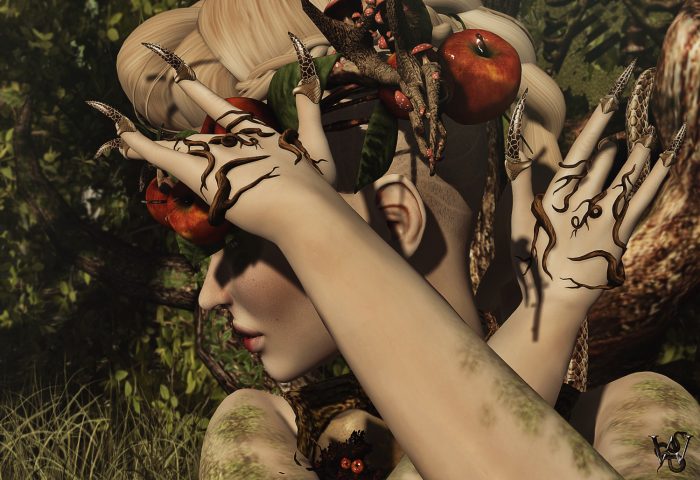 What I had in mind for this pictures, was a modern version of Eve, paired with the believe in natural powers and the Wiccan doctrine – Something nature connected 🙂 (I still won’t believe, that the female should have been the only reason, that locked out the human species from paradise 😉 )

I LOVE the creativity of CURELESS [+] / CUREMORE, especially their gachas that contain those amazing, special and unusual/artistic torsos. This time it was the “Lost Paradise” gacha, which drew my attention. The gacha does not only contain wearable parts, but as well some cool creations for the scenery. The trees, which come with a HUD for the bones and the apples, the snakes in all colors and shapes and the apples on the ground are a perfect scenery. I wanted all kind of warm colors for the set and with the HUDs it was really easy to achieve 🙂 I added some other things to my look – you all know I really love mix and match. I had some amazing parts, which I could imagine would fit so well, like the hand branches from .Drastic. or the cool claws from E.A.Studio. Iam not a fan of ling empty legs – I stated that in past posts already – so I wanted something wrapped around my legs and certainly no high heels 😉 I wanted flat shoes… but I do not own many of those, as I rarely shop for flat shoes besides sneakers, heavy boots and those kind of style. So I was so happy, when I found the “Charro Flats” still sitting in my inventory. I know I got them at an event and then I never had the right look to use them – until today!

Again I was able to just play with stuff I got over the time and did not have to follow any deadlines. Sometimes I really do need that, as much as I enjoy blogging, sometimes I need my freedom. It is different, when you blog for a designer. where you have items you want to showcase in the focus in a very clear way, or if you just fool around with things. I really do enjoy both and I need both for my happiness 😉 It feels like 2 completely different challenges to me and I do enjoy both! 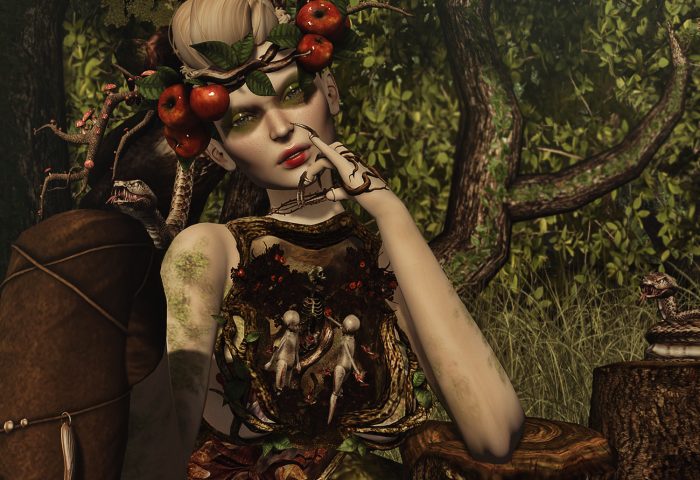 Wicca’s Wardrobe (parcel beside the store)