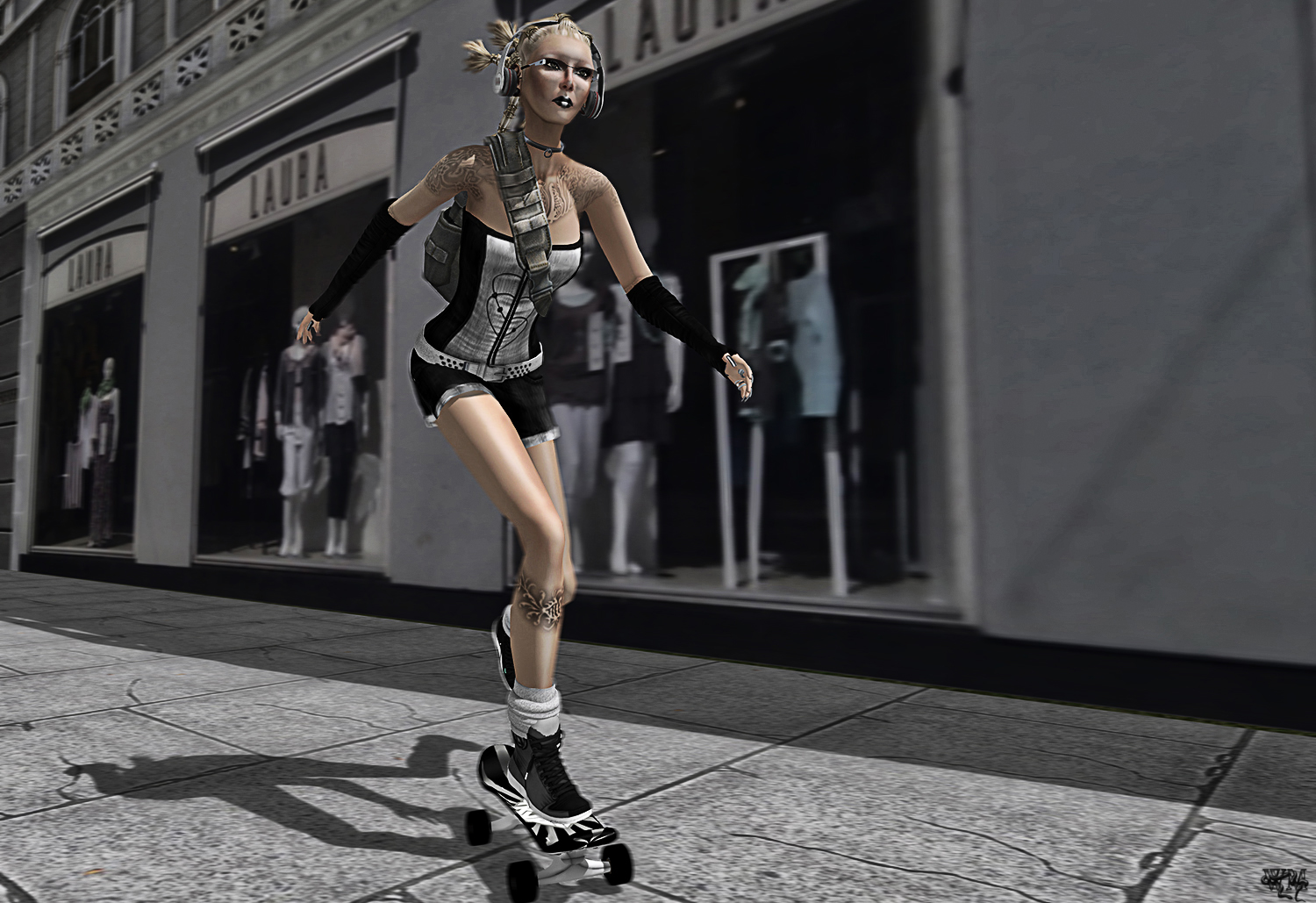 He was a boy she was a girl
can I make it anymore obvious?

He was a punk, she did ballet
What more can I say?

He wanted her,she’d never tell
secretly she wanted him as well
but all of her friends, stuck up their nose
they had a problem with his baggy clothes.

He was a skater boy,
she said see you later boy
he wasn’t good enough for her
she had a pretty face
but her head was up in a space
she needed to come back down to earth

Five years from now, she sits at home
Feeding the baby she’s all alone

She turns on T.V., guess who she sees
Skater boy rocking up MTV

She calls up her friends, they already know
And they’ve all got tickets to see his show

she tags along, and stands in the crowd
Looks up at the man that she turned down 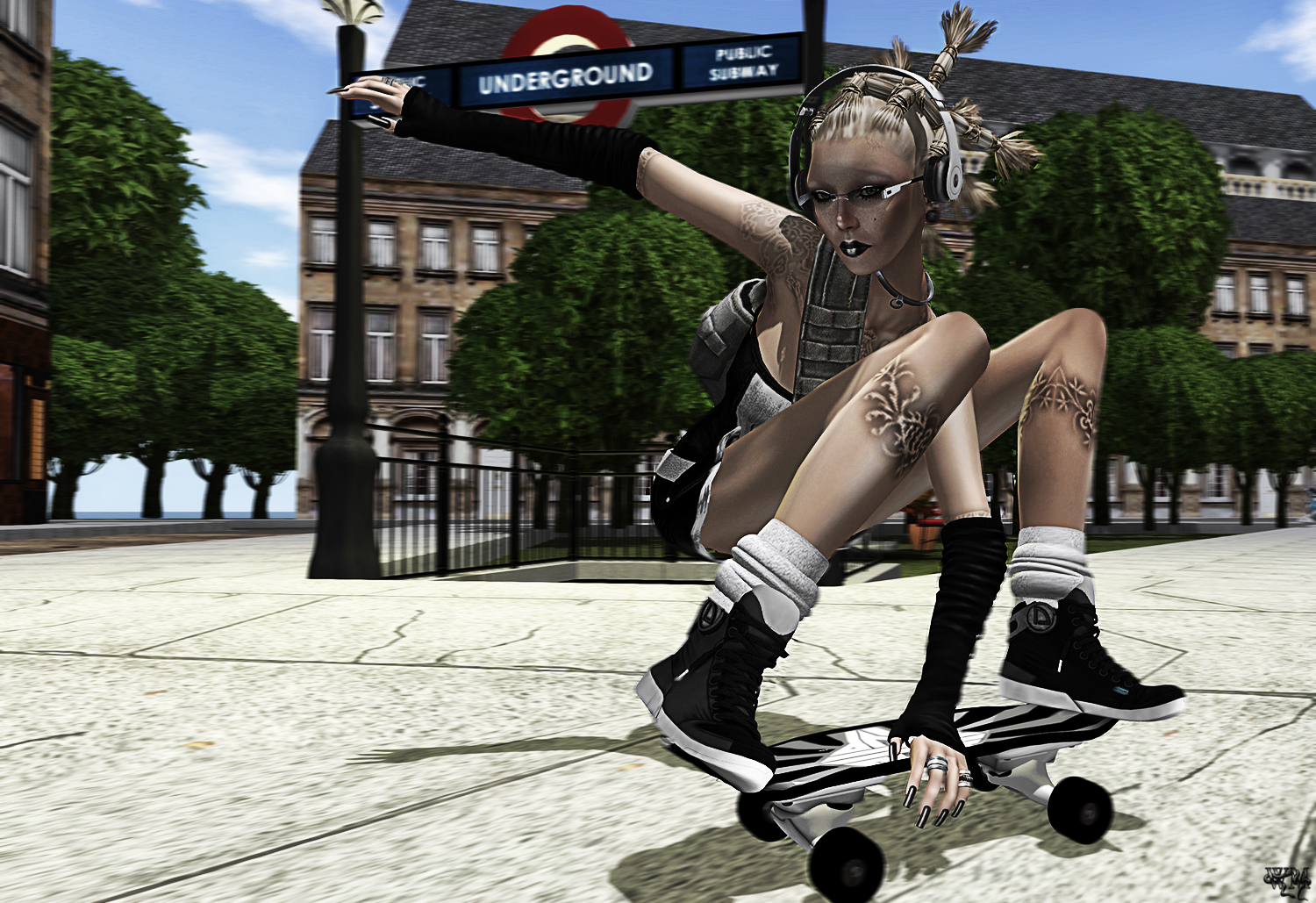 Sorry girl, but you missed out
Well tough luck that boy’s mine now

He’s just a boy and I’m just a girl
can I make it anymore obvious?

We are in love, haven’t you heard?
How we rock each others world!

I’m with the skaterboy
I said see ya later boy
I’ll be backstage after the show
I’ll be at the studio
Singing the song we wrote
About a girl you used to know. 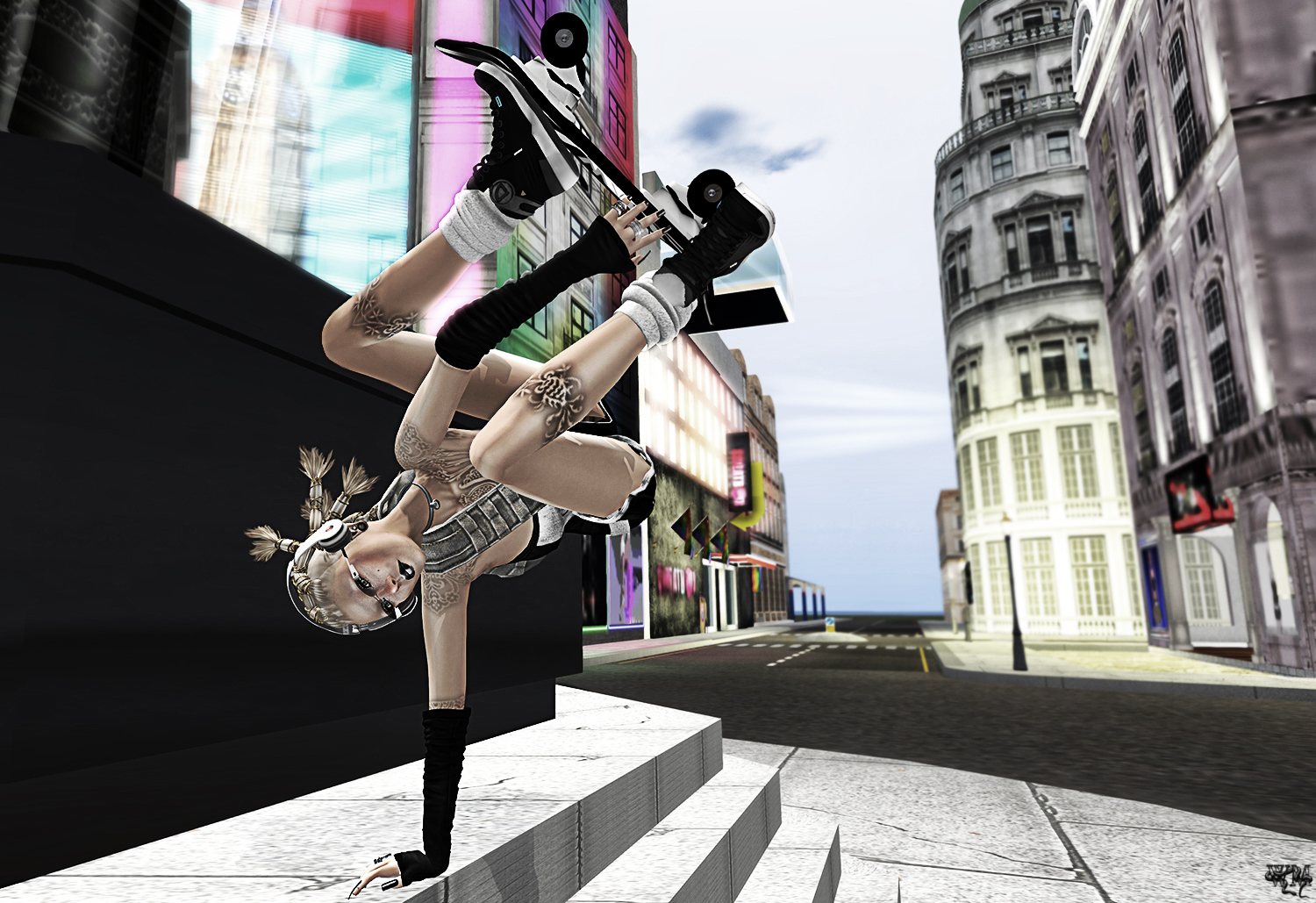 Lately Inga Wind Clothing started to sell new mesh designs. The combination of Inga’s high quality textures and awesome mesh prims really grabbed my attention. A few days ago I unpacked another one of Inga’s great new releases and immediately I had a funny scenery in mind… The “Patsy” outfit comes as a full ready to wear outfit with shoes. And the cute look of this outfit made me think about the sweet idea I had in mind. I asked Oralee if she could build a little set, about a funny painting scenery, like 2 girls try to have fun on a boring grey winter Sunday afternoon and decide to repaint they apartment. She was fast with her building and I again added some accessories to make the scene even more funny. In the end Oralee found some of those cool paper hats and paint tattoos on SL Marketplace and the scene was perfect. We really had a lot of fun doing this as you can see 😉 If you wanna grab the new “Petsy” outfit you just have to make your way to the Inga Wind Clothing Mainstore 🙂

My inventory is a mess most of the times with all the blogging items, new releases and the stuff I buy, cause I think I have tome to blog it still *lol*.  But I have to admit I love my mess *giggles* Sometimes it gives me christmas more than once during the year if I discover something I never thought of :). Lately I found a super cute outfit from Inga Wind, designer and owner of Inga Wind Clothing sitting in my inventory. I put it on and really liked it.

The “Codie Jumpsuit” really is a cool outfit for the everyday wardrobe and with the cuteness it has by itself I could combine it wonderful with some accessories, without pushing it in the back of the view. “Codie” is made of lots of different shades of blue and as well many different fabrics. The chest part is kinda ruffles while the rest of the body is more straight. The sweet lines that hold the top in place are made with prims and the exact same look you will find for the belt. The neat cap completes the cool casual blue look 😉

The jewelry for this amazing blue look comes from Mandala as I thought the textures and the style would go amazing with each other and for me it did :p

The shoes are a combination of the new “Oxa” mesh ankle boots by Baiastice and the “Legwarmer for heels” from G Field. Sissy Pessoa, owner and designer of Baiastice, released wonderful new mesh ankle boots in uni colors and a special edition of mixed colors, I will have them soon here on my blog as well :).

As I was roaming around in my little box in side of Lovely’s Inventory (if you now ask yourself why that, just read here: http://wiccamerlin.wordpress.com/2011/12/30/lovelymi-facetattoos-makeups-more/ 🙂 It was a sweet little fun Lovely did not too long ago 😉 ) I decided to walk out and peek a bit through Lovely’s inventory. I found a lot of cool makeups lying around and some stuff of House of Rage, what she designed and worked on. As well al lot of pictures and other clothing, suddenly I saw a folder called “[MIWA] Poses”… now I became curious… Lovely does poses? I sneaked inside the folder with my mini digi cam and tried the out. The were so cool that I had to snap them… then I heard a rumble going on outside and realized Lovely is back and was working something in her inventory! I grabbed my cam left the poses and sneaked back to my box hiding… but take a look what I got…

Thetra Blackheart: “ Cherry Candy: Any lady wearing this outfit will be as sweet as the name! Cherry red gingham fabric dress adorned with cherries around the drop waist. Crinoline for that uplifting and puffy look while dancing at the Hop! Shoes, Hair, glasses, tattoo and bubble gum add to her adorable yet naughty look.

Rockabillie Rumble: This outfit screams ‘let’s rock and roll!’ leather jacket with the retro raised collar matches perfectly with this cotton vintage styled button down shirt. Denim jeans with turned up cuffs harbour his comb to keep his ‘do’ just right! Chain drive wallet and his camel cigarettes to keep him busy while at the Hop!”

Mayden Ushimawa: “The legendary 50’s! I love that years and that style! Jukebox and rock ‘n roll … this is life!!

For the woman I made ​​the typical dress with wide skirt with a cherries texture and a red pullover.The hair is also typical of those years. Glasses, shoes and hair are included.For man the classic hair and sideburns with a tuft. The shirt is reminiscent of the uniform of the players bowling. belt with keychain rigorously with the billiard ball number 8, and cuffed jeans. In those years have a nice car would mean many things, so I added a bright red Cadillac unmissable! The Cadillac is intentionally represented jokingly, with funny girls happy to be led around by a beautiful boy. *lol*”

Bubble Cyberstar: “NATALIE AND JOHNNY, united in their rebellion, the sweet and innocent character natalie johnny intoxicates the senses can not resist the temptation to love her even more if possible ..
Natalie wears a pink outfit in fuchsia and black, agreed with the detail of polka dots on your shirt, leggings and scarf knotted around his neck, a broad and flexible skirt gay movement and gives a super cute sunglasses hiding her sweet look ..
Johnny wears a classic black leather jacket very complete with all sculpt the neck, sleeves and belt, blue jeans and uploaded to the ankle inside white T-shirt that reveals her wild tattoo.” Lexi Vargas: “The male outfit is called Roundabout and the female one is called Fashion Go Round.”

“Fashion is ever changing, styles come, go, blend and morph.  With the use of bright  boho fabrics, victorian silhouettes  and avant-gaurde detailing, these carousel  themed designs give a playful homage to the ever changing world of fashion.” Thetra Blackheart: “La Marioinette Danceuse! what more could u expect from this incredible outfit but the  epitomoe of Avante Garde Fantasy! Noire Velvet and lace accented with leather off set by hand embroidered silk. Mask, hair, and boots are perfectly suited to this masterpiece.  This outfit once worn will sweep you away to a place of no return.
Le Marionettist!  This ensemble is matched his dancer!   Thick midnight velvet,  accompanied by  silk, lace and leather have produced a fantastic masterpiece. The collar is single stitched leather stems accented with lace. Checkered pattern inlayed in sleeves behind strapping to bring more dimension to the arm, and thickness to jacket.  Riveted leather pants harmonize boots and jacket.  The   Imagination has no limits with this oufit!”

Bubble Cyberstar: “FEMALE OUTFIT LADY SILVER = Silver Lady, full of magic and glamor night lights next to the moon … silver dress strips involves imitating the bust and legs, a small hat, boots and big shoulder pads of cold silver mixing fantasy with warmth of the feathers of a swan.

MALE = KING METAL OUTFIT Woo to the lady in the cold silvery full moon … costume imitating metal strips wrapped the body and legs, crown, shoulder pads and a metal fantasy magic wands with which it has the power to turn any metal that everything he touches …”