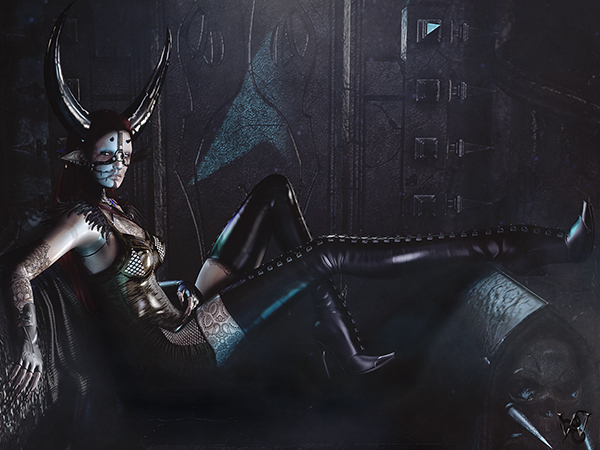 The one that you fear is so close
The woman tattooed with the rose
Claws that are sharp, she’ll tear you apart
Make you into food for the crows

Revenge is her aim, she’ll make you pay
She talks a mean game and she’ll blow you away 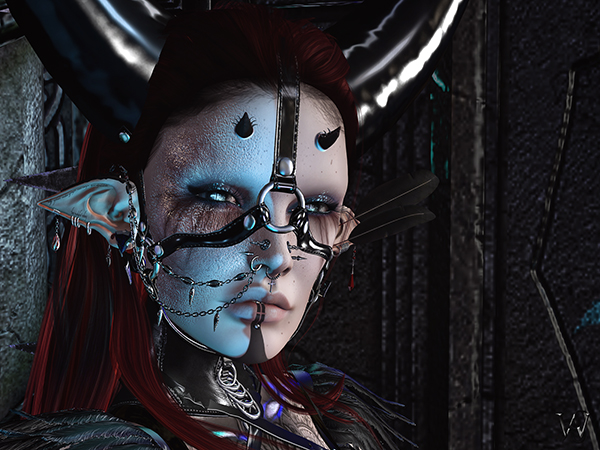 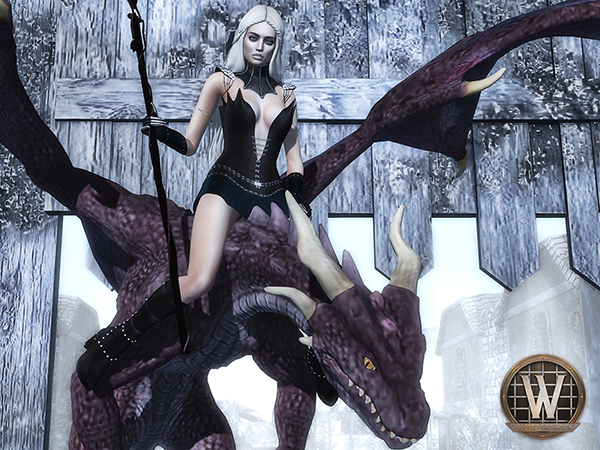 For this themed event we have created the Jaenya Dress inspired by Daenerys Targaryen, Mother of Dragons. This corset-style mini dress is rigged to fit Lara, Hourglass and Freya and is available in light and dark options, with a fatpack option as well if you want ALL the colors. Jaenya will be discounted for the event and regular priced when it comes home to the mainstore, so be sure to swing by the event and get it at a reduced price.

We also have a gift for the Final Winter event’s mini hunt. We have a blue dragon egg hidden in our booth. We can’t tell you what’s inside, but we can tell you that a special one of a kind item can be found inside! 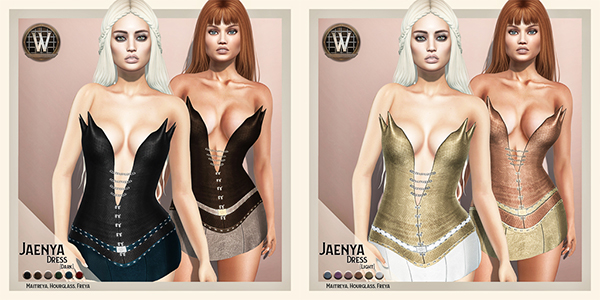 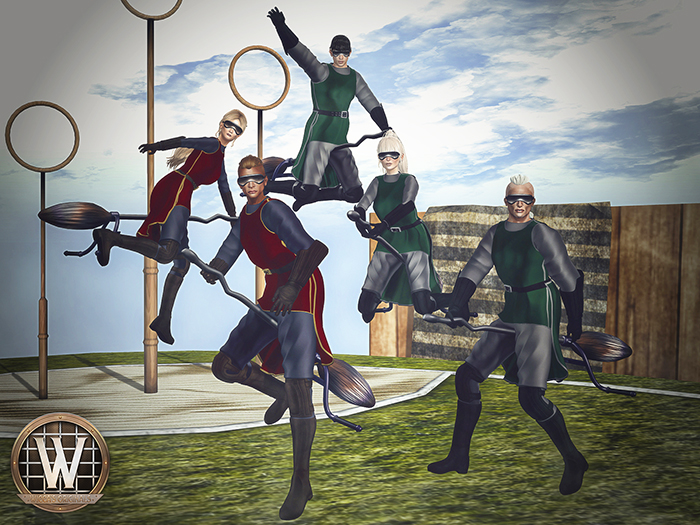 The World of Magic event is a brand new, sim-wide, one-time sales event celebrating fantasy and magic inspired by the world of Harry Potter. For this special event we have created an outfit inspired by the game of Quiddich – Cedric for the fellas and Isobel for the ladies. 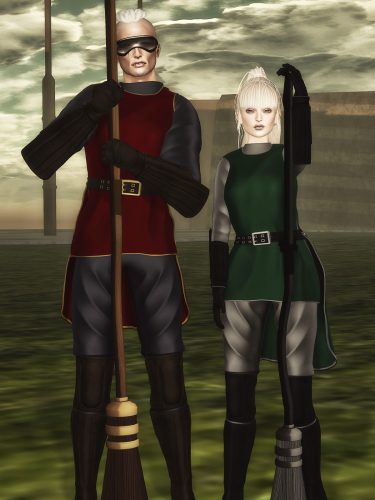 It comes complete with Bento gloves, goggles, and cape that can be removed. The outfit is one piece (including the boots) and all of it can be color changed. You can even add your team’s texture! There are two versions, dark and colors. Isobel is designed to fit Maitreya only and Cedric is designed to fit Signature Gianni. Other bodies for both may work since the bodies are largely alphaed out, but be sure to try the demo! 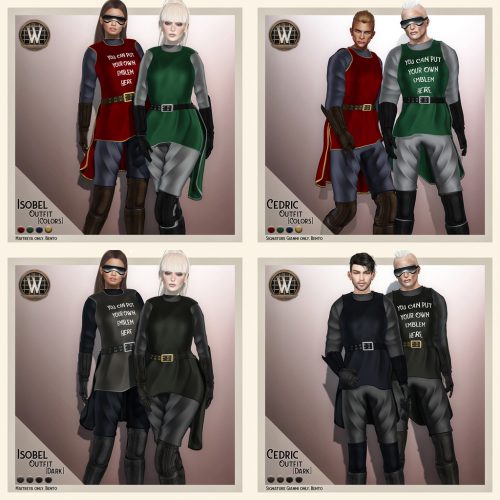 Just for fun we made a little bento picture pose set to use with your favorite broom and our Isobel & Cedric outfits (broom NOT included!) 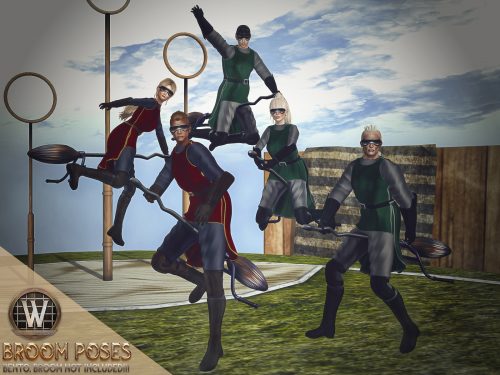 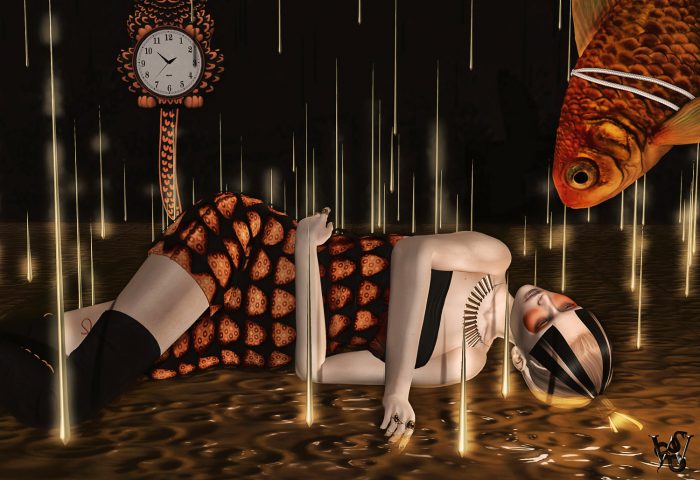 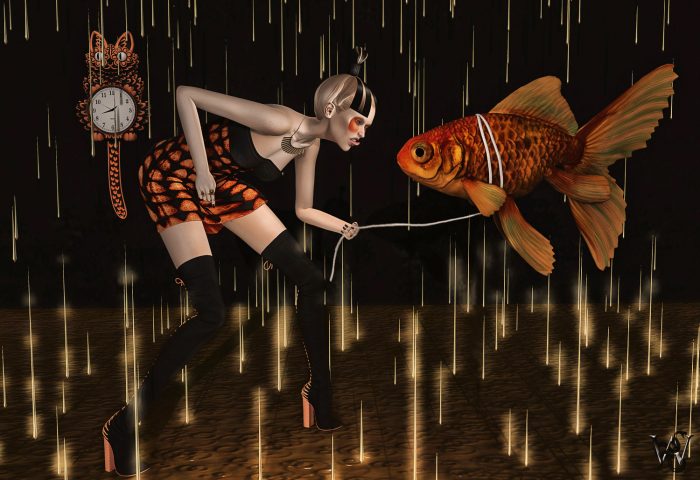 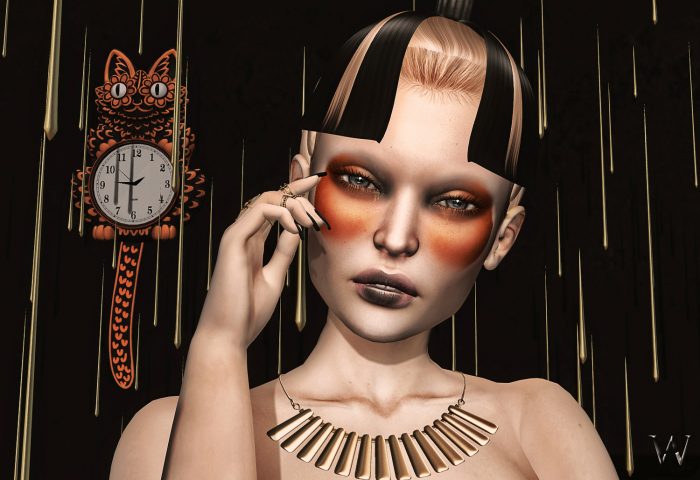 Yeah, everybody leaves
If they get the chance
And this…
is my chance 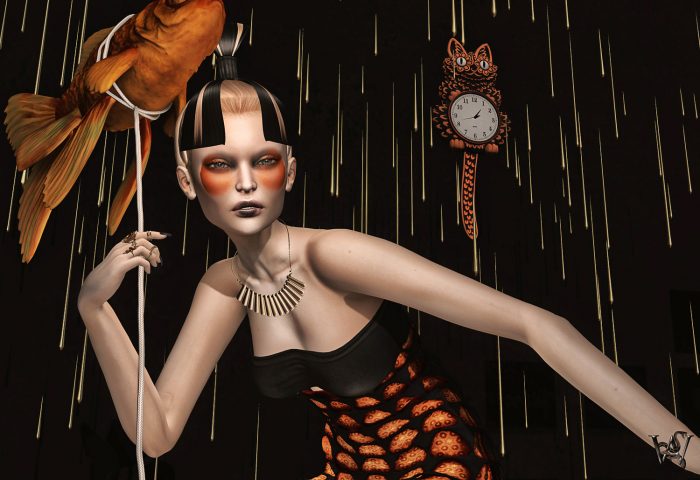 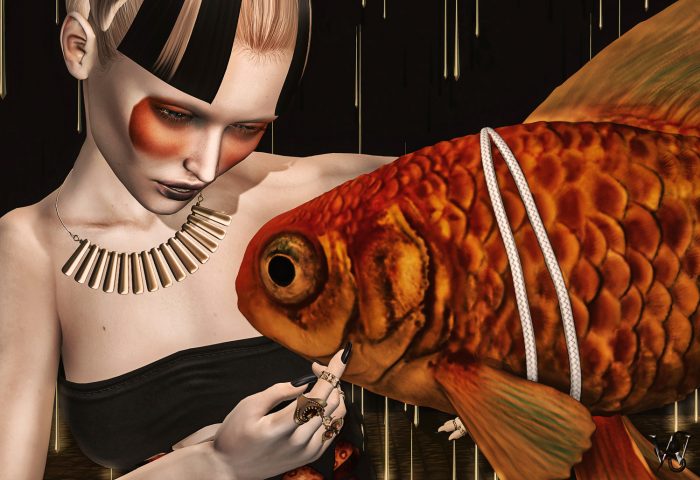 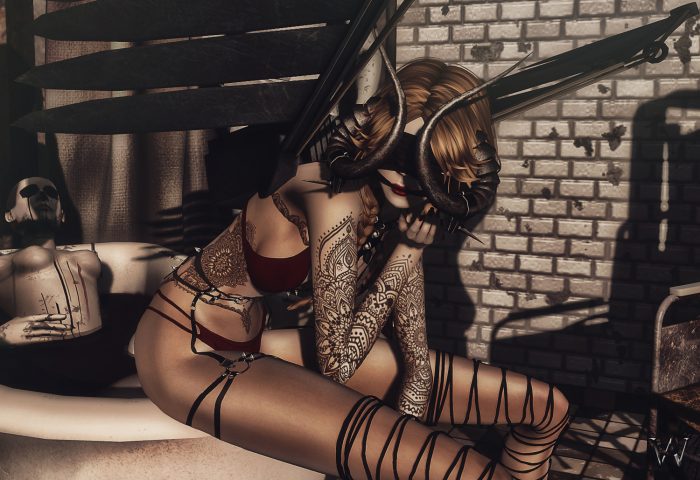 Yes, I have an addiction to mystic, dark things, especially for abandoned asylums at night. The imagination has no boundaries with those 😉

This time I got the idea, when I saw the “Spook Show Mannequins” from Remarkable Oblivion. It was a gacha at an event, and when I saw them… I did instantly know.. I need those :p

I am not a huge gacha player but those I really wanted and since they were commons, I thought I could give it a try. Guess what… certainly if I do not play for the rares once.. I get some*facepalms*

But since they were nice as well it did not bother me too much *grins*. I am sure I can use them for another post as well. 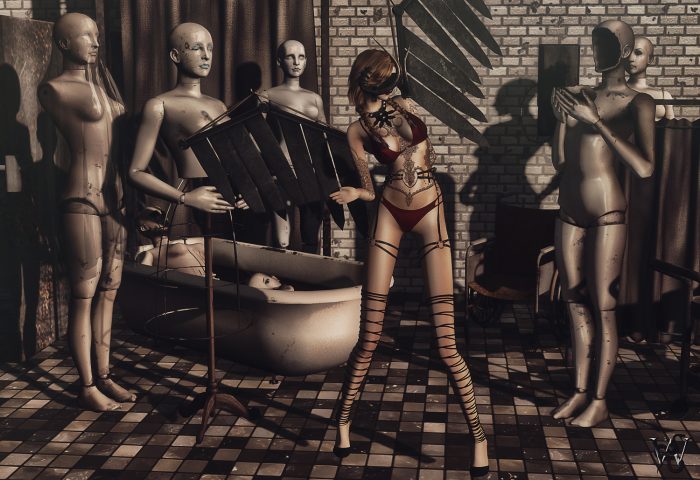 As soon as I was at home, I unpacked them and put them down in a random way and just looked at them. After some time, they spoke to me and I got a basic idea about what I would love to do.

Most of you know I love antithetical scenarios and pictures. And when I looked at those Mannequins, I got the idea to combine them with some sexy and colorful lingerie 😉

I decided to go with one of the newer releases from Asteria, the “Nika” lingerie. With the choice of different colors the deep red combined with some black accepts like the straps on the legs it was kinda a mix of different color sets 😉

More and more the basic idea did grow in my head… Maybe you saw the Silent Hill movie… the idea I had when I unpacked them kinda was inspired by a scene of that movie. The one with the blind creepy nurses, which are attracted by the light and react on noises – they have no eyes, no face and kinda being anonymous. When I built my set with the new Mannequins I had this in mind the whole time :p . 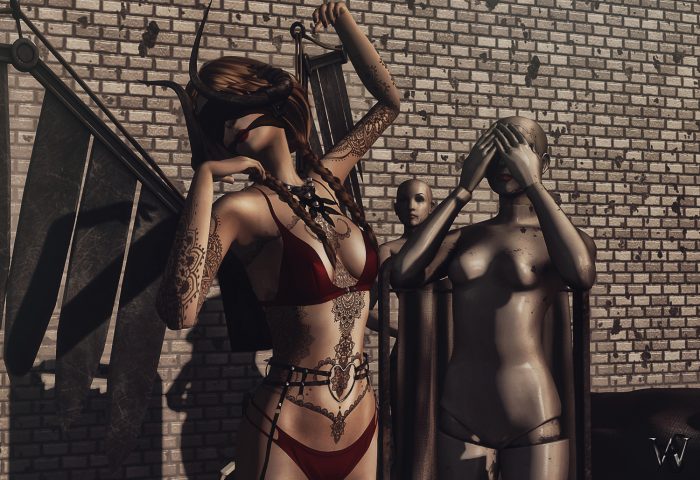 The necklace I pulled out from another outfit of Asteria called “Capretto”. With the sharp edges and the funky shape it just was a perfect addition for jewelry in a dark and grungy way 😉

The shoes I got from Empire. I wanted something boots like but not as solid as boots and the “Bottlebrush” heels from Empire were just what I was looking for. With a pump style for the foot part and amazing lines up till over the knee. Boots but no boots! *snickers*

The cool horns I found on Marketplace. Made by CerberusXing ([CX]) – originally for a gacha – those horns are awesome detailed and somewhat special and unique in the way they come down in the front.

Now to come back to my originally idea of the blind nurses, I needed something for my head/face to get the idea of a blind kinda anonymous look. First I remembered a hood from !!XX!!. It is quite old, and I only used the lower part, but for the idea it worked perfectly 😉 For the upper part I just put a simple blindfold. 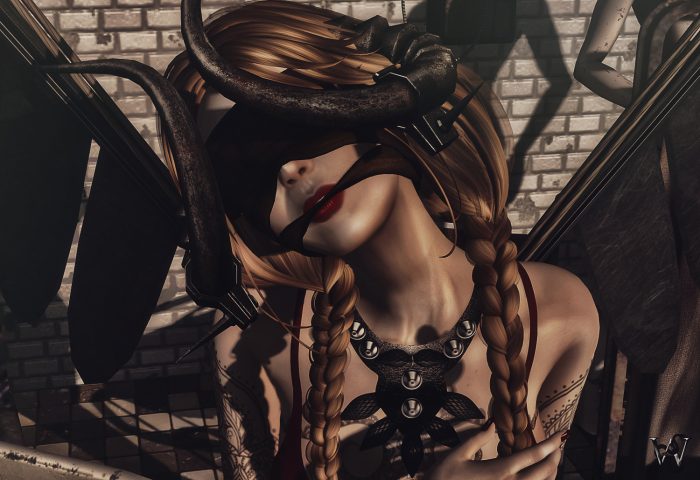 Now just a coll set was missing. I stared at the Mannequins, which I just rezzed into my white studio. I remembered the movie scene and the abandoned asylum surgery room. To make sure, I just poked you tube about the nurse scenes of both movies :p

While I watched them, I thought of a gacha set from 22769, that just should be perfect. Now the difficult part… Since I did not recall the name of that set and an inventory of nearly 200K of items… go figure…

I tried several keywords and when I typed ‘Asylum’ something from 22769 showed up – BINGO!

The whole gacha set is called “Abandoned Asylum” [*facepalms*… I should have known that much…). It contains many different items, furniture and deco parts and even a full Asylum house is part of it as the mystical prize! I rezzed out a few things and played with them until everything fell together for the whole set 🙂

I had a lot of fun doing those pictures and the whole process of finding all parts I needed for my idea, just reminded me about  why I love blogging and making pictures so much… the fun and joy of being creative and use all kind of things even if they do not belong together on the first view 😉 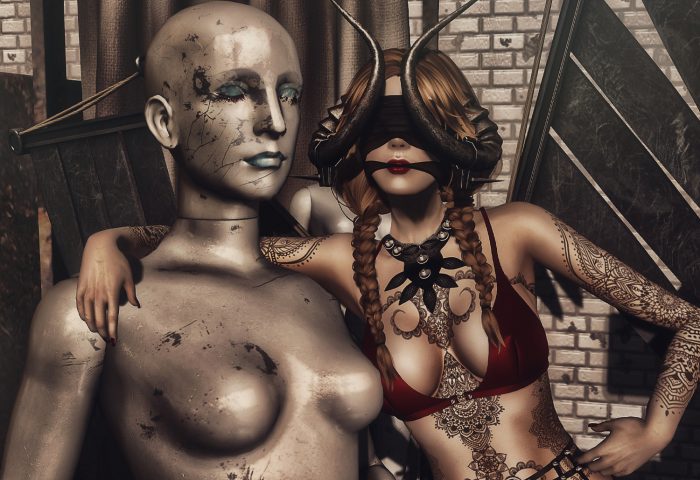 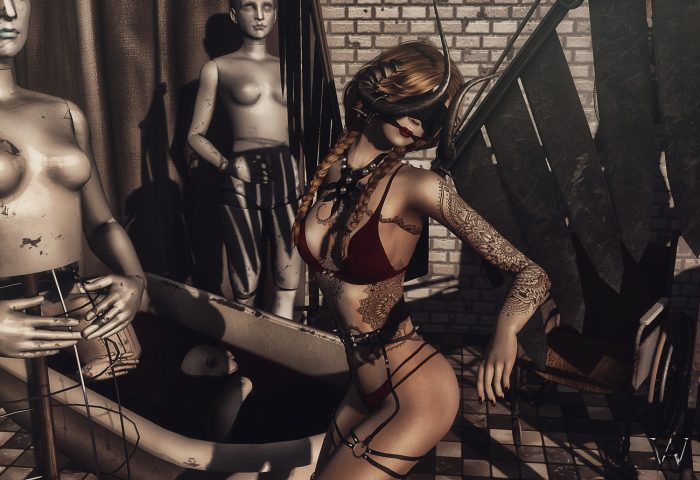 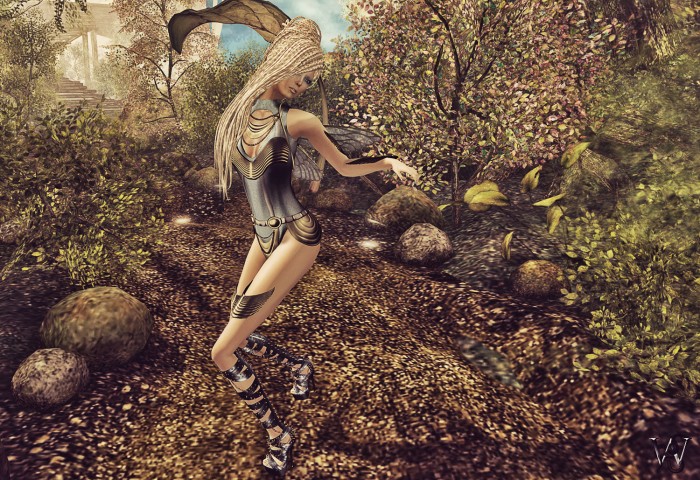 Today I would like to showcase one of our latest releases. The “Miniel” outfit is available at the actual round of The Fantasy Collective (TFC). 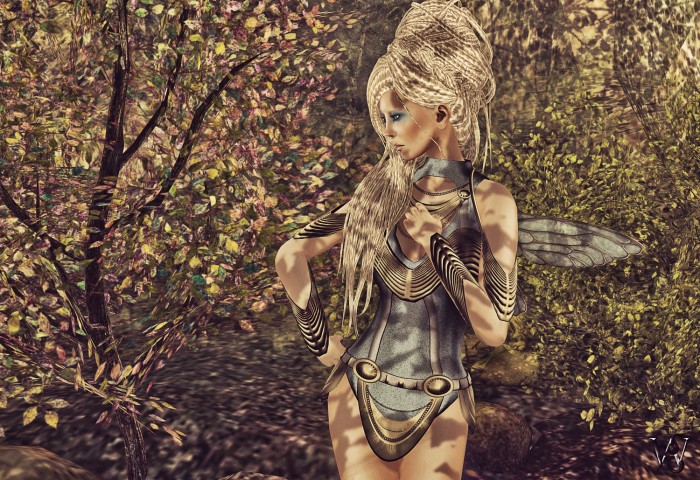 For today I chose the blue/brass version of the outfit, as it looked the best in the wooden environment I chose for my pictures. At the event you will find 5 different colors for the outfit.

The body is decorated with some armor looking parts as well as with some very filigree chains. The cool arm and leg armor is part of the whole “Miniel” outfit too. 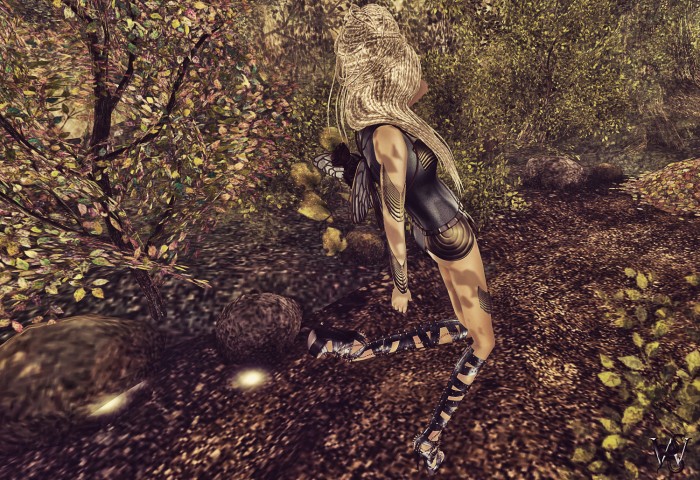 When I saw the “Eva” wings from NeverWish, I totally fell in love with them. They matched so perfect in style and color to the “Miniel” outfit. 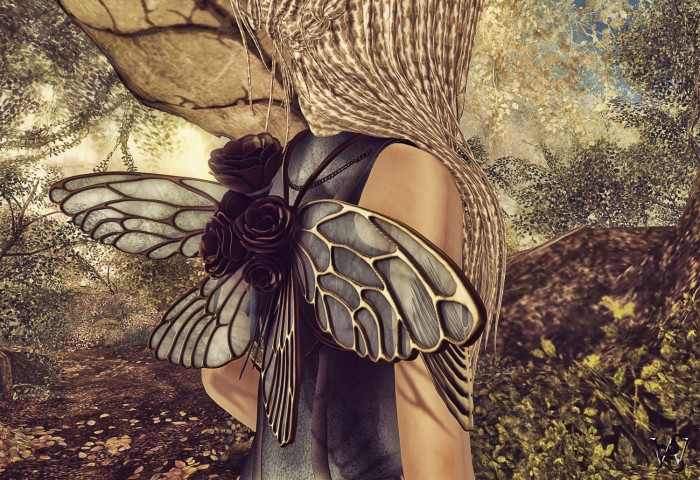 The “Eva” wings are incredible detailed and wonderful textured, little wings, that fit to many different looks. With the delicate roses and the wonderful filigree metal shapes they are a must have for every fantasy wardrobe. The wings do have a HUD to recolor the wings and metals separately. 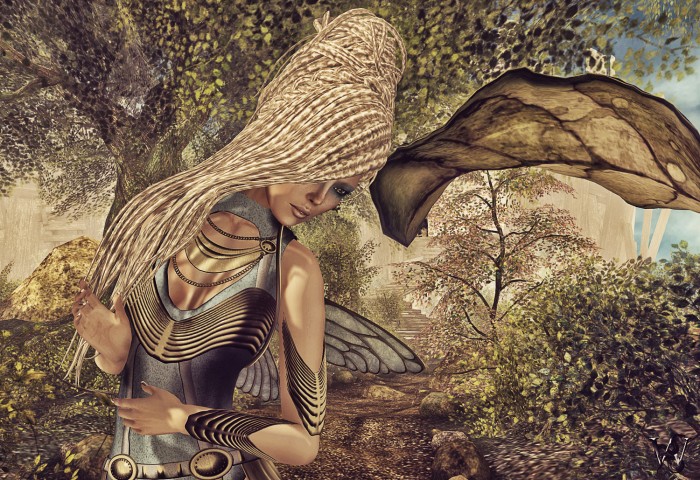 The cool “Nanina” hair was made by EMO-tions. The hair is made of many little braided parts, that are non symmetrical and have an awesome high top part.

The boots are as well from Wicca’s Wardrobe. The “Inara” boots with the little golden spikes and chains totally rocked the style and the blue version of the ‘Chic Edition’, even matched the color of the “Miniel” body suit. 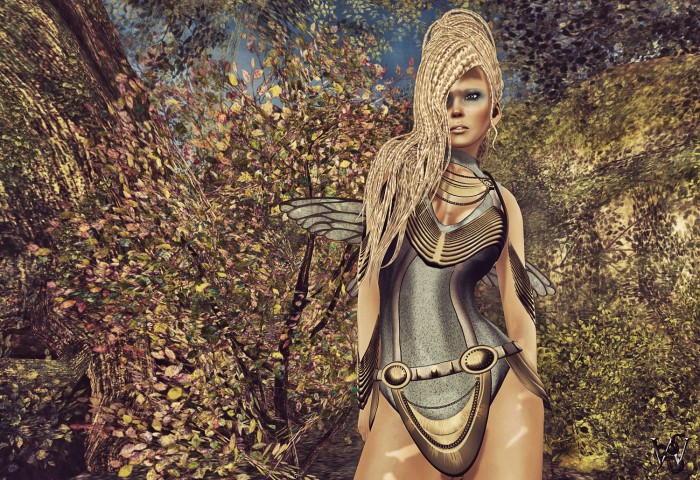 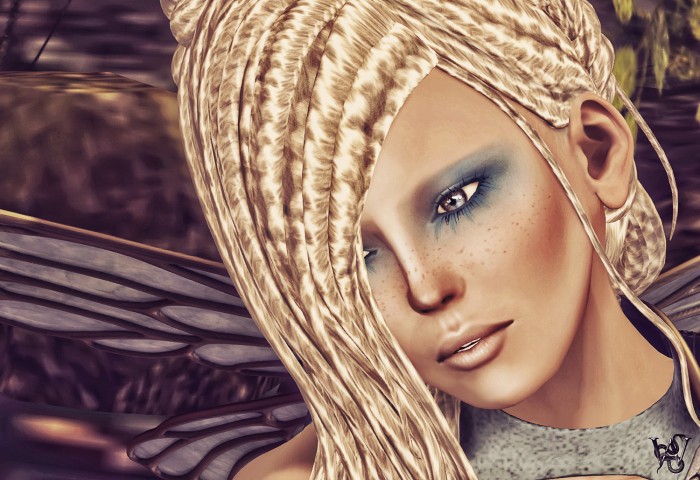