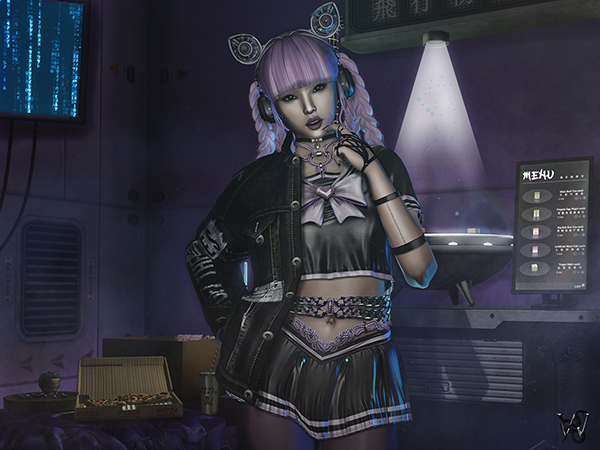 And again I have a wonderful new release from LeLUTKA! This time, LeLUTKA gives more attention to their East Asian customers with the new “Ryn 2.0” Evolution head (for the males there is a pendant named “Kane”)

The head has a very young look and so I wanted to find something what would work with such a look and came across the Kawaii genre. It was against my ethnics to put her in lingerie or something too sexy as she has more of a teen or young women look to me with this kind of shape and skin. Certainly I had to use the amazing piercings again that come with the head 😉 Ryn certainly has all the amazing features of the 2.0 Evolution line as well! 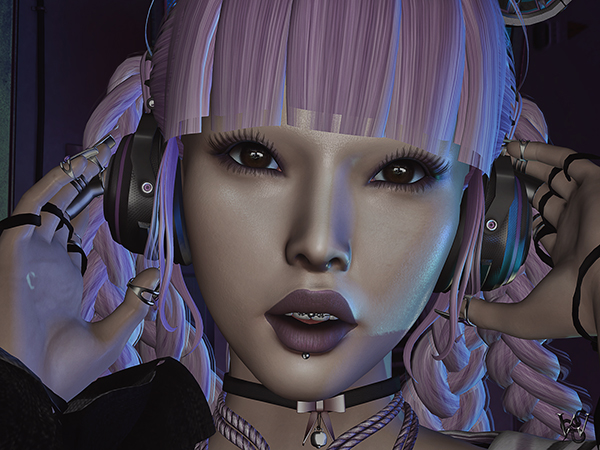 It amazes me how LeLUTKa has the skills and passion, to make such different heads for all the ethnics around the world. We had the amazing wonderful African or African-American head with Nuri, we had all kind of European, American heads with Lake, Erin, Nova and now we get the Asian look as well with Ryn. You still can twist your shape and have even all the subcultures of the Asian ethnic with this head, I just wanted to blog it as pure as possible with my first post – I only made the nose a tiny wee bit smaller as it came. I am sure that won’t be my last post as I enjoyed my little journey into the Kawaii look and there is so many more genres you can do with that look 😉

So pop over to the LeLUTKA main store and try out the new – and maybe even all the other ones, too – heads! 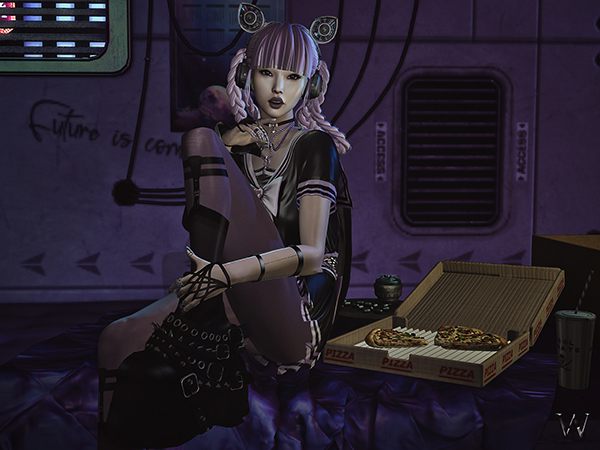 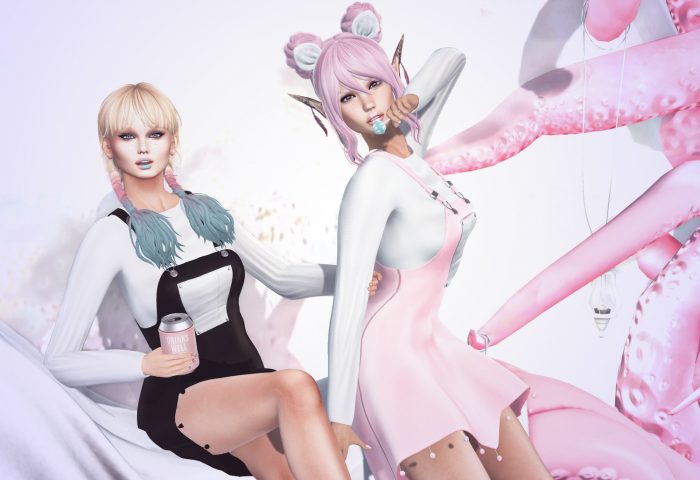 Kawaii is all about cuteness and do we have something cute for you! We have created a one piece dress trimmed with adorable pom poms. Our Natsumi dress comes with a HUD that offers versatility to the straps, dress, pocket, tops and metals. The Natsumi HUD allows you to choose from 10 fabric colors and 6 metal colors. You are sure to come up with your own cute combination of colors to make Natsumi adorable on you! Natsumi is sized to fit Maitreya’s Lara, Slink’s Hourglass, and Belleza’s Freya. 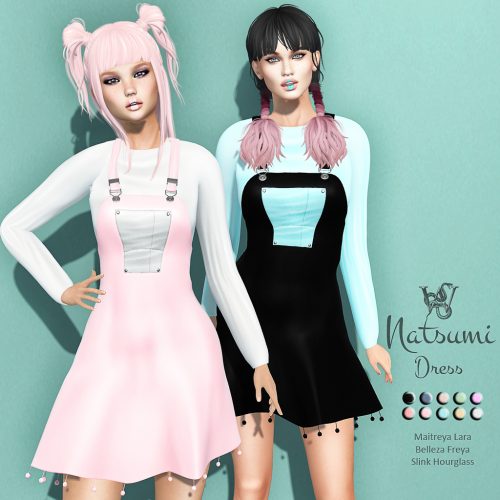 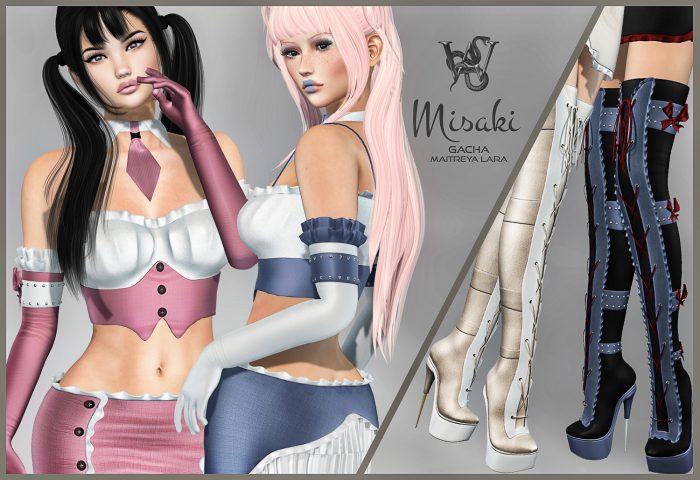 For this round of the Gacha Garden we have Misaki. This collection is made up of 18 commons and 2 rares, all come with HUDs. The Commons HUD changes the color of the buttons and ruffles. The rares HUD has a full HUD that gives you a range of texture colors for the item itself along with its accents. 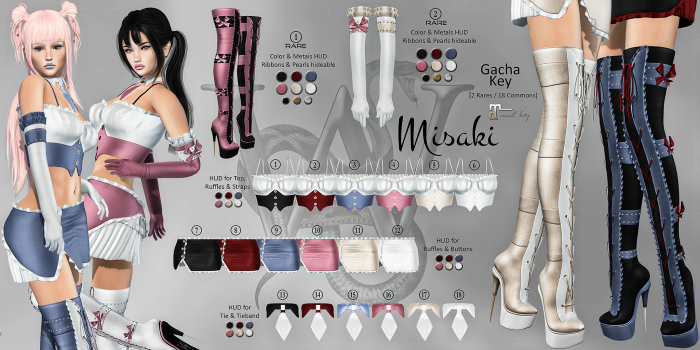 Of course there is also a Seed of Inspiration! This special gift is only available at the event at every 20th pull.

The Misaki Seed of Inspiration gift is a pair of short bento gloves, which comes with its own full HUD. The Misaki collection is made for Maitreya only. 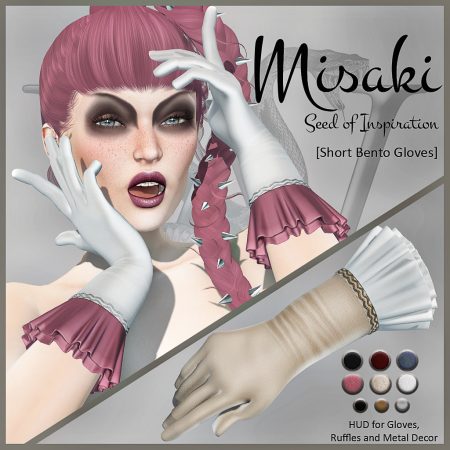 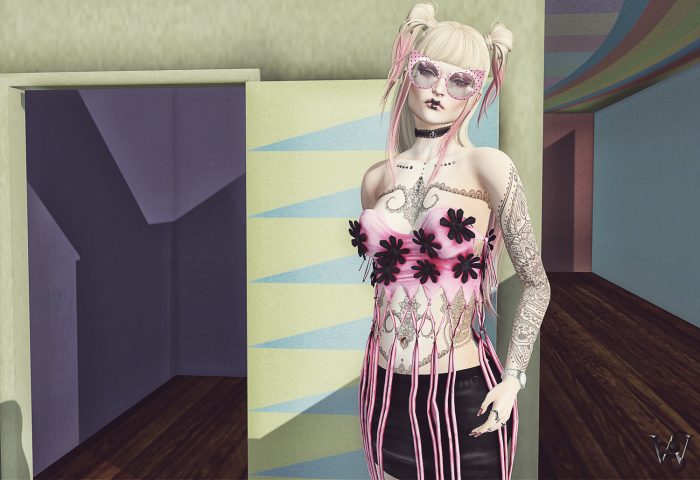 Me and pastel colors… usually not the best match :p

The cool background maybe was the initial fact that lead me towards the sweet colors. The amazing “Aloha” dress, which is available at the actual round of The Liaison Collaborative, supported that idea of a summer, sweet colors post with a light vintage touch :p 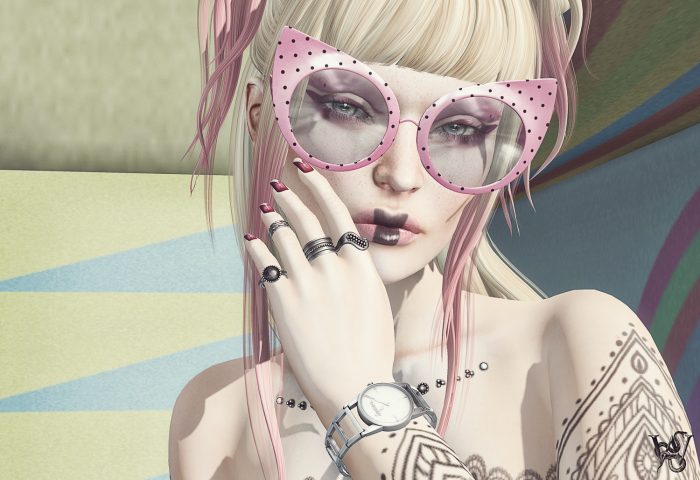 First I did not even plan on a vintage touch, but when I found the “Betty Babes Glasses” from Manik Queen, I could not resist to tweak my style towards a cute vintage one.. yes… I said.. CUTE!

The glasses have so many color options and as well are sold in 2 different styles. Blank, white dots and black dots – there is no style you cannot make them fit 😉

Now I would like to take a closer look at my hands. The fantastic rings are made by MEVA. I saw many Maitreya bento fitted rings lately but rarely some that rea so cool and detailed and as well more casual looking, so you can wear them as everyday accessory. With all the curves and decorations they are really a little art piece and outstanding from all the ones I saw before. 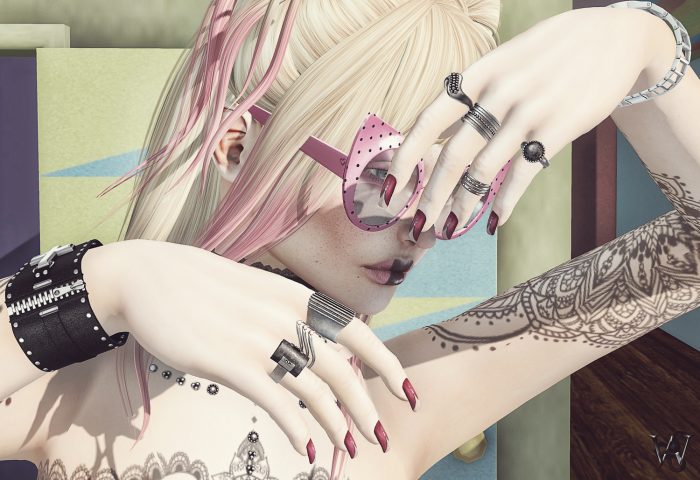 The rings are not just mirrored for left and right hand you actually have 2 totally different designs for each hand. you can wear the rings single for each finger or you can just use the full set at once… all options are included in the pack. As if that would not be already enough.. you as well can decide, if you would like the rings in silver or gold 🙂 MEVA released so many more amazing rings – I soon have to make a special about it but I so wanted to showcase the first set today 😉

Speaking of MEVA… did you realize those cool piercings at my collarbone and my cleavage^^? Mea Carnell, owner and designer of MEVA, made those for the actual round of Cosmo. They are a wonderful little styling accessories, that just give the little extra-ordinary look 😉 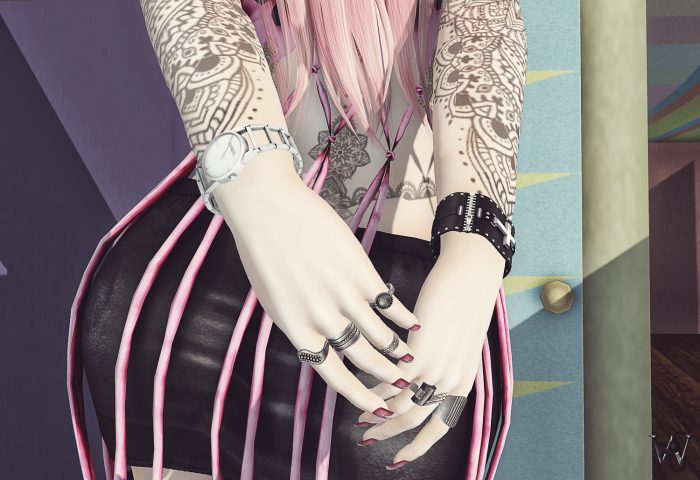 The wonderful nail polish again was made by Nailed It!, one of my favourite nail polish places. O loved the little opened zipper which gives the idea of very exclusive french nails 😉

The amazing lipstick certainly comes from Zibska, while the absolute stunning eyeshadow was made by Slackgirl 😉 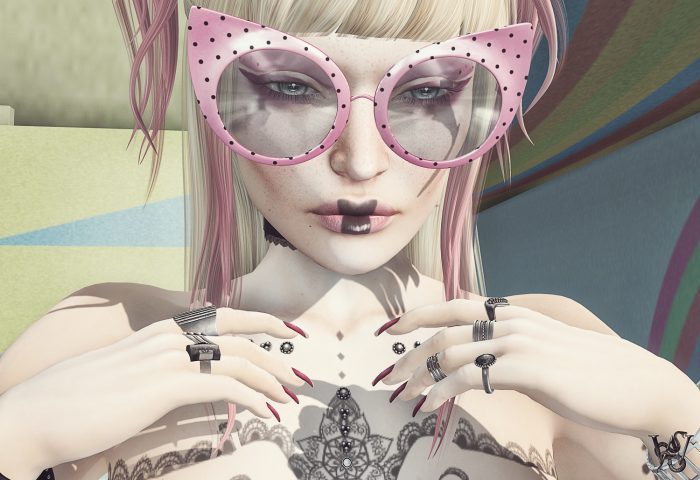 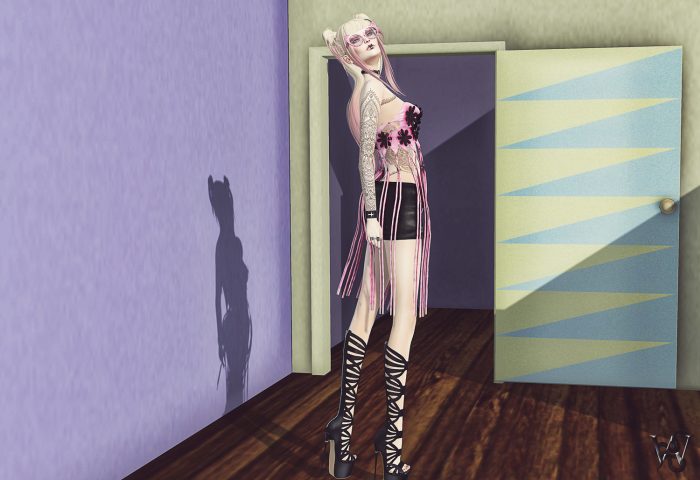 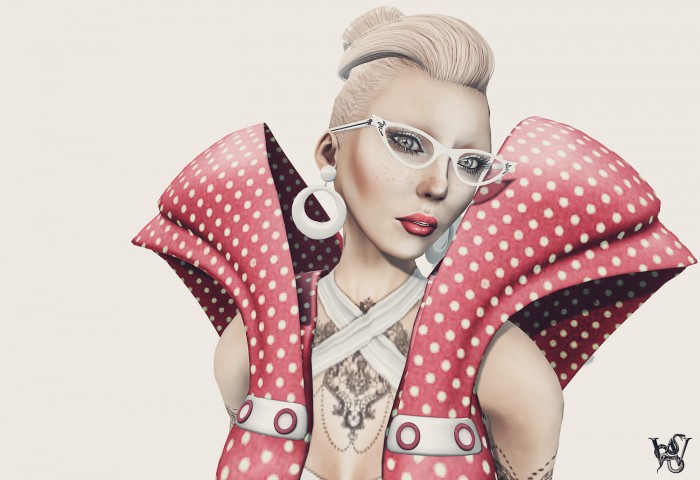 I am very happy that I can announce we are now able to even make rigged original clothing!

What makes it even more special for me is that our first design was made for a very special Lady!

And even that contest is the reason for our new “Zoomy Vest”.

It was not even long time planned, that we make something for Zoomy. We were working on the national costume for Miss SL Poland 2015 (yes, that one will be showcased soon too I just need to finish the pics :p) when Zoomy was in my IMs and told me she was searching for a cropped vest for one of her finale stylings. She said she looked already for quite some time and could not find what she wanted or the vest was not cooperating with the rest of her styling. The more we talked the more I got an idea, but I did not dare to ask her about as I did not wanna bother or obrude her too  much. Then she all of sudden said she never would dare to ask me to make one, as she would know I would be busy with the gown anyways. You cannot imagine my smile in that moment… Zoomy was always a very dear friend to me over time, a crazy sister in mind and someone who always understood my weirdness. So you can imagine which honor it would be to create a piece for such an amazing woman!

So I told her that I would LOVE to design something for her, but that I have to ask Veo and Red as well. We are a team in creating and already were working on other designs so I could not decide that on my own. I was very nervous what Veo would say about it though.

Next day as soon as I saw him, I jumped on him, making super puppy eyes and told him about the idea for Zoomy’s cropped vest. I scribbled my idea on a piece of paper and showed him and he just nodded and said “Oh yeah we can do that”. 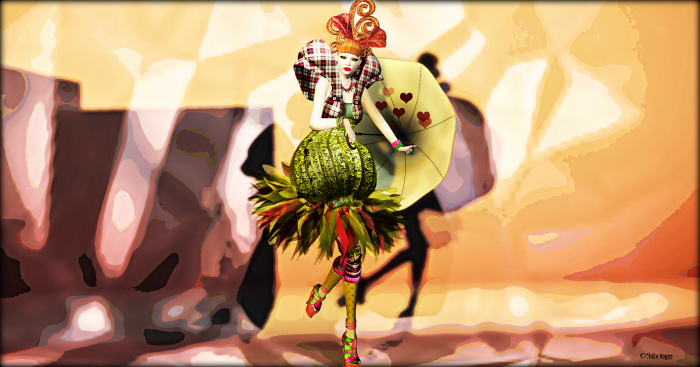 You can imagine, it did not too even one second to jump back in Zoomy’s IM and tell her the good news.

With her special style, the vest had to be in a certain look to mactch the rest of the styling.

So while i was finishing the gown for JJ, Veo worked on the vest and not too much later I got my favourite IM from him that said “I guess I am done!”

When he uploaded it and showed it to me I had goosebumps… that was exactly what I had in mind and it was fully rigged and everything!

I grabbed it and immediately went to Photoshop to make the textures. Like you can see the styling was extremely colorful and wild so the vest had to match in there. I made 3 different textures and as it ould have been fate one even was close to the pants, which I never saw before 😉 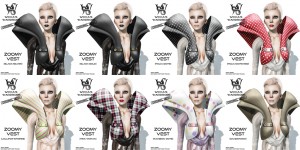 Besides the 3 colors for Zoomy I already made some more, because I totally fell in love with that vest :p.

So we just had to get Zoomy to kinda custom tailor the vest onto her body with the dress under it, that again was a huge fun time when we were all standing on the platform and uploaded a bunch of different sizes until we had got it right ;). Somehow it felt like a real fitting for a super model*giggles*

It was a very special moment for me and as well for us all at Wicca’s Wardrobe. When Zoomy then, a few days later even won the Miss CoC 2015, you can imagine how much we were excited and happy.

And now I am even more happy, that I may announce that the “Zoomy Vest” now is in store in 8 different textures to match as many different looks s you can imagine from casual to steampunk and even to the zoomylishious new style trend KAWA Couture! 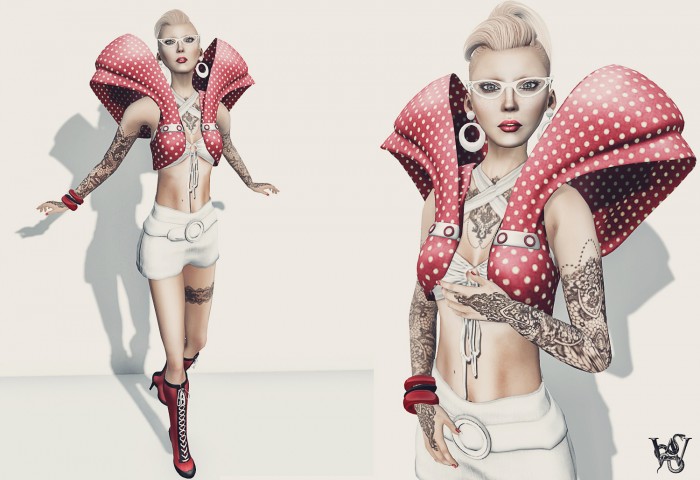 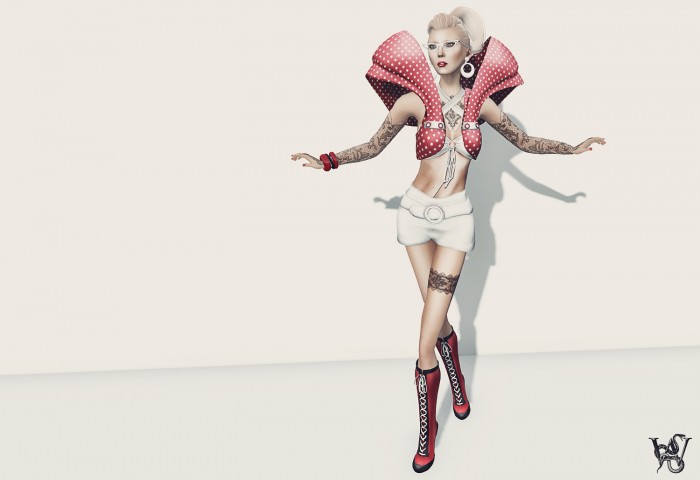