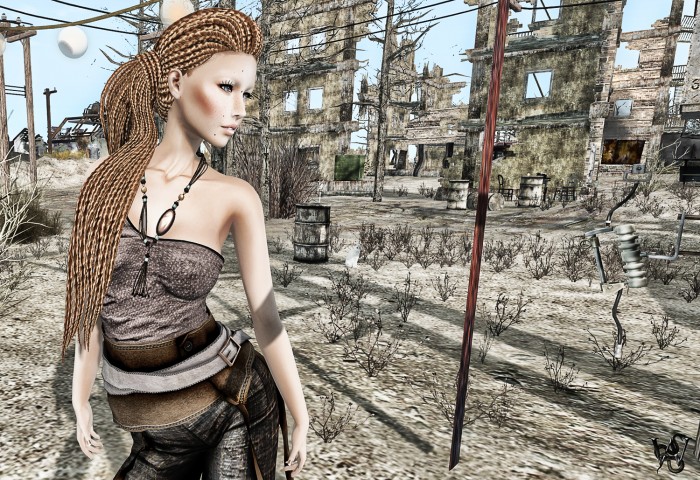 Today I will have my first post trying out my new mesh head. Before I want to go deeper into my mesh head adventure… I would like to drag your attention on the awesome clothing I chose for this post.

Today I chose a fantastic outfit from [sys], which totally caught my heart. The cool used cargo pants with the huge belt and the grunge looking top, totally would be something I would wear in RL as well.

The whole “Straps” set comes with a huge HUD to customize fabrics and colors and you as well can choose from 2 different fabrics in each 3 colors for the top. As well you can bus all the parts separate in many different colors at the actual round of Shiny Shabby.

The amazing and cool hair was made by Mirja Mills, owner and designer of EMO-tions. The “Sandrine” hair style totally went with the urban look of the “Straps” outfit from [sys]. The clean sorted and back pulled braids part over the right shoulder, so that you have some in front and some on the back of the shoulder. The perfect rigging makes it possible to move your shoulder and arm what ever direction you can imagine. 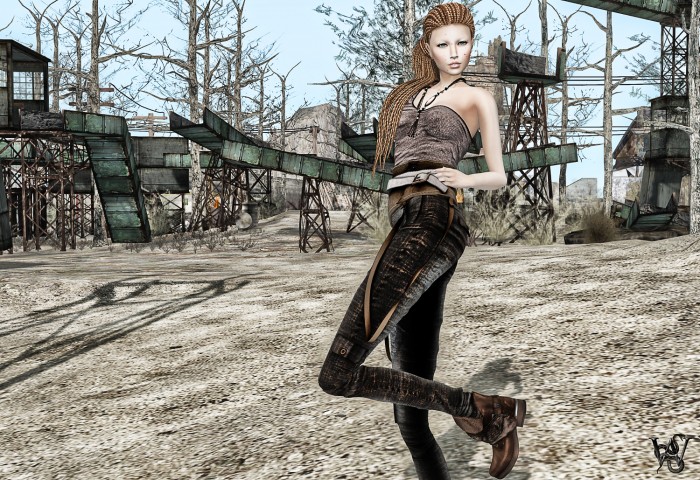 The cool “Dagger” boots come from Gizza and originally were made for males. If you know me that is not something that holds me back from trying to wear them as a female as well :p.

Since one of the versions is a non rigged one, I was able to resize them and make them a little smaller to fit my female measures 😉 I did not wanna wear too much jewelry to keep the urban character of the look, but the “Dulce” necklace from Kunglers was a wonderful match to keep the style idea. 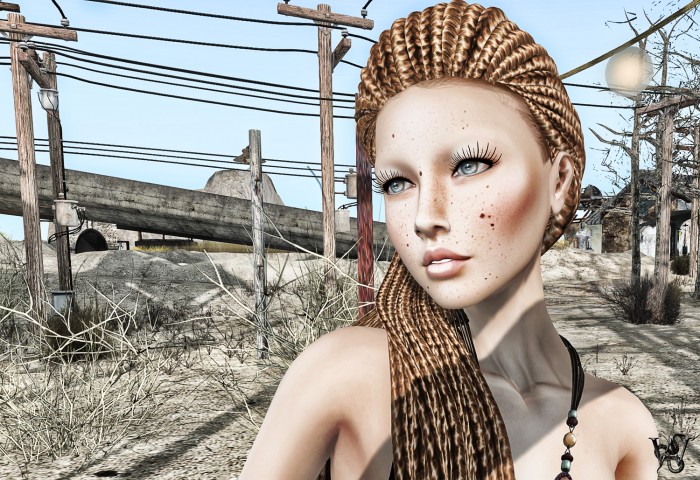 But now to the topic of my todays post… my first mesh head.

(My thoughts and opinions are just my very own ones,  for myself and I do NOT mean to attack anyone who has a different opinion about this topic!)

I was against the mesh heads for a very long time as to me personally you can try as much with skins and makeups, you always will look similar to so many others if you wear a mesh head. The probably results out of the fact, that we cannot yet customize the facial features on all of them. some allow at least some stretching to all directions of the whole head, but certain trademarks like the nose, the mouth or the eyes cannot really be customized as much as we are able with our default avatar head.

To me a unique face counts a lot as it makes a huge part of the character of an avatar. If you are in the modeling scene you are taught to make your avatar as unique as possible, to create trademarks that let you standout from many others and to selfbrand yourself. I never was looking too much left and right or tried to copy an already existing model or avatar even if I had seen many faces that I really adore. I more admired them for being how they are as usually they had a very distinctive face, that make them stand out where every they showed up. People like Shena Neox, Vixie Rayna, blackliquid Tokyoska, Absinthe (sintheontherocks), Kay Fairey or Honey Bender – to just name a few – I always was able to recognize on shows, vendors, print  or video productions. And that kinda was my engine from the very beginning, to develop a face for Wicca, that always showed it was her without having her name tag right beside her. 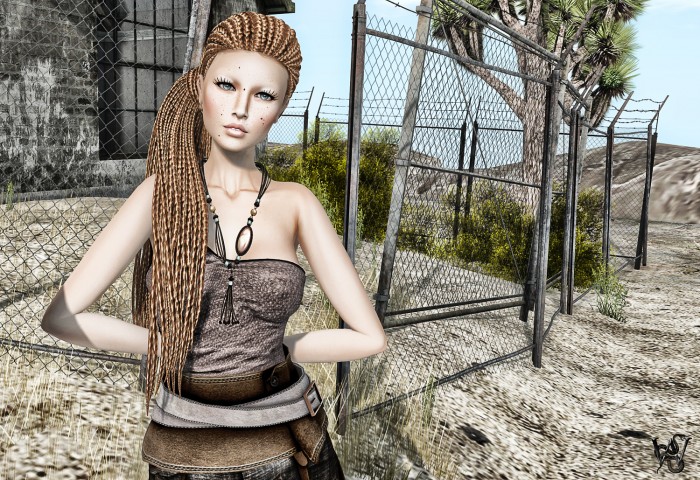 So you can imagine how I was wondering, when the first mesh heads came out and so many ppl ran like crazy for them. All of a sudden many people looked similar and after a while, it was even possible to name the heads and where they are coming from, anyways who was wearing them and what kind of skin they applied to it. I always questioned myself where the uniqueness was going with the lauch of the new aera of mesh attachments. I always tried the demos of the new mesh heads, anyways of which brand. Popular ones and as well the ones of the under dogs. More and more different heads came out but always when I tried them with several different skins, I never lost the feeling of loosing my own face by wearing one of the mesh heads.

For a while I skipped the idea of a mesh head for myself until about a week ago when the Skin Fair 2016 opened. As usual I went there to see if I could find a new skin for myself. I was surprised and disappointed as it seemed, that so many popular skin labels only made appliers for all kind of mesh heads but none anymore bothered with skins for the default avatar head. I left the fair after a short while and back at home the mesh heads came back to my mind and I again ran around and collected demos from all over the place.

After a few days of trying, I found one head that looked not too bad. The “Jessica” head from Catwa. It did not have those huge kissy lips that stuck out from the face and the nose was not as tiny as for the most I tried before. I thought I could give it a try and got it.

On the first day, when I did not yet bother too much about makeups yet, I just go me some freckles, as Wicca has freckles for years now. Together with the new “Isabelle” skin from [sys] I started my first mesh head adventure…

Since I was wearing a [sys] skin before I was lucky with all my other mesh body attachments like my Slink hands & feet or my Physique body, as I could use all my already existing appliers. On the first view I really did like the new “Jessica” head, even though it was not Wicca anymore. There are pros about a mesh head, that I really can see, as you do not have any angles or shadows on spots, where they do not belong, like we have them on our default avatar faces around the nose, on the forehead or around the chin. The head and face just look realistic and smooth. On the other hand, taking pictures is so much more easy as you do not have a lot of post processing in graphic programs anymore. 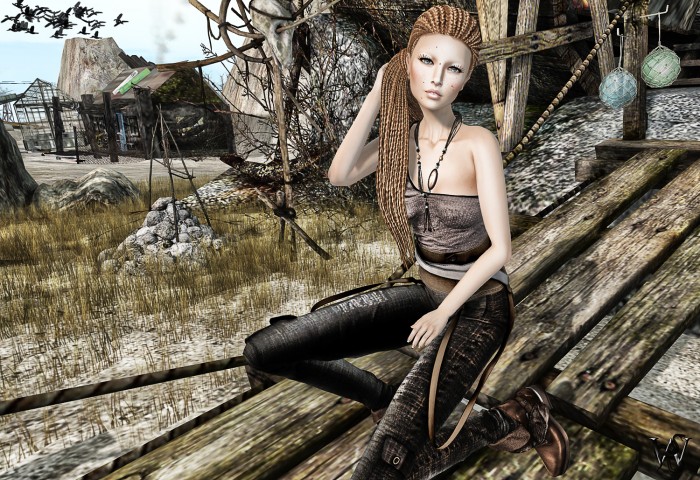 The day after I started to fool around with makeups. I was told with the new Omega system it would be so easy to customize the face and make it my own, since you can use a variety of different makeups and face art. So I went for some Catwa – Omega makeup shopping…

The head limits a lot in using makeups or combine makeups in a way so that you do not see any seams. When I applied the first eye shadow it took off my freckles and when I tried to reapply the freckles parts of the eyeshadow were gone. So first of all for some makeups I have to make a decision if I want to take my freckles off or not. If you wanna achieve a realistic look as blogger and model, in my opinion you cannot have freckles on one day and none on the other as freckles as well are part of the character that you try to create. I can see that if you do not play too much with makeups and wear more of an everyday look with not too heavy makeups it might work perfectly well. But for the work of a model and blogger you usually play around with makeups a lot and the mesh head limits you in that like crazy, especially if you are an addicted to extraordinary, huge or mixed makeups. Mixing makeups, like adding up layers and create unique looks anyways does not work at all. 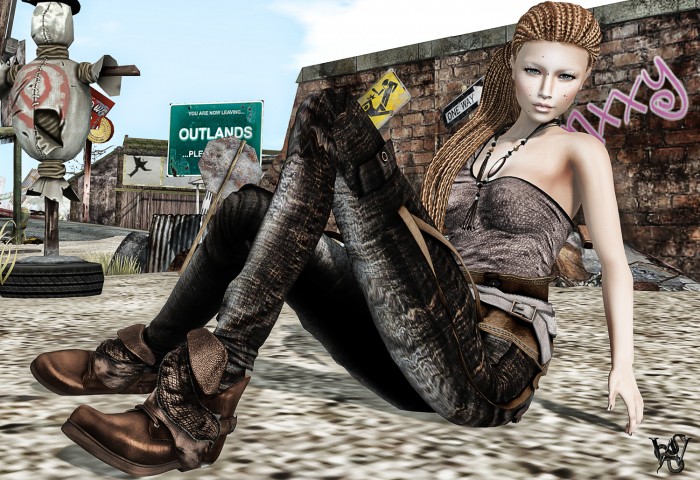 My overall resume is not totally against mesh heads, as I can see the usage in some cases. For myself, I decided, that the mesh head might be fun for some pictures or art work, or even for vendor pictures sometimes, but not something I would wear in general as I would loose to much of Wicca and myself.

I am looking forward to the time when SL will add some more bones for the head creators, so we maybe can really customize the mesh heads with the sliders, like we used to with our default avatar faces 😉 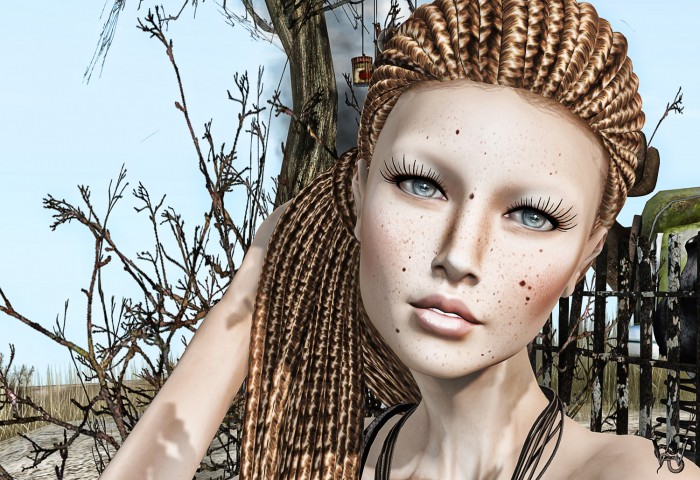 Model & Photographer: Wicca Merlin (yes it is really me 😉 )

2 thoughts on “Wastelands – I finally got my first mesh head :p”