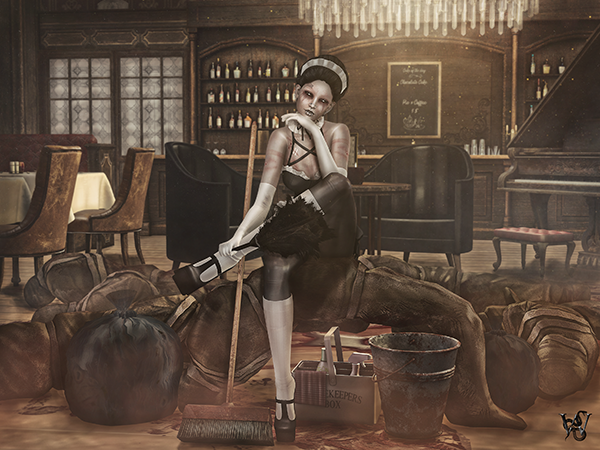 Griselda sighed heavily as she looked in to the empty bar of the Scarlett Hotel. Another day, another mess to clean up. This was her life now: or rather, her afterlife.
If she had known back in 1922 what a vacation at the Scarlett Hotel would cost her, Griselda would’ve stayed in the stifling heat of the city. She never would have accepted the position as a companion to a maidenly aunt. And never met … him. Her feet shuffle across the hard wood floor of the hotel’s bar as Griselda carries the cleaning supplies deeper into the room. Exhausted, she drops everything to her feet and slumps down on top of a large, wrapped lump lying on the floor. There is nothing she can do until they are moved out of her way. Last night was one hell of a party. He was in rare form. Anton is quite the charmer, especially back in the Summer of 1922. To a young, innocent girl like Griselda, the worldly aristocrat could do no wrong. She fell hopelessly in love with the tall, dark Duke the moment she espied him in the lobby of the Scarlett Hotel. Her heart stopped when her Aunt Matilda introduced them and he kissed her hand. Griselda nearly fainted when he asked her to dine with him that very night. 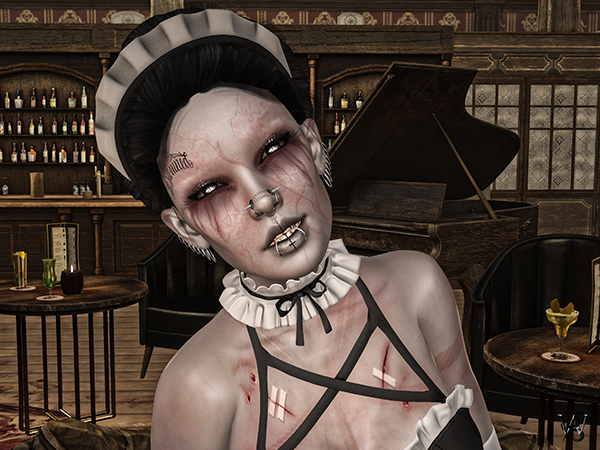 Their days were filled with long walks in the dense gardens, lazy umbrella-covered boat rides on the lake or picnics beneath the shade of weeping willows. Anton spun mesmerizing stories of his world travels, read poetry from well-worn first editions and kissed her breathless.
Even in the hot July days, Anton always dressed in a fashionable suit, gloves, hat and sunglasses. At first Griselda associated this with his European upbringing, but Anton assured her it was simply sensitivity to the sun. His pale skin, dark hair and hypnotic eyes just made him all that more handsome. Griselda was wined and dined on champagne and elegant cuisine each night and then danced until dawn. Although Griselda was there to work, Aunt Matilda was ecstatic over Anton’s fascination with her niece. If anything, Aunt Matilda seemed almost relieved.
If Griselda hadn’t been so blinded by Anton’s charisma and attention, she would have remembered Aunt Matilda was not a nice person. Griselda was not her aunt’s first paid traveling companion. There was a long list and they never remained passed one trip and were never heard from again. The family said they all ran away since Aunt Matilda was such a vile person.
On a starry night, beneath a full moon, when Anton asked her to spend the rest of her life with him, Griselda thought she died and gone to heaven. Heaven it was not. She managed to croak out a barely audible acceptance before Anton gathered her in his arms and kissed her long and hard. The kiss left her dizzy and flushed as he peppered soft kisses on her face, along her jaw and down her neck. 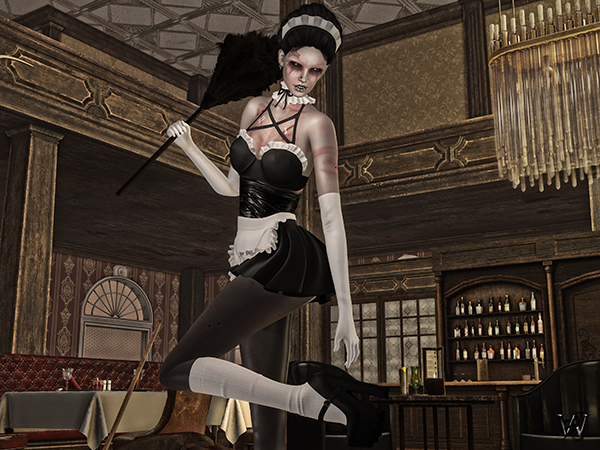 And then … Unconsciously, Griselda touched the two puncture marks on her neck and heaved another heavy sigh. Damn Aunt Matilda for selling her off to a Vampire for wealth and immortality. Damn Anton for taking an innocent girl’s dreams and turning them into nightmares. And damn herself for thinking such a sophisticated man like Anton could ever love a frumpy girl like Griselda.
Anton did confess after the deed was done that he had not meant to turn her into a creature of the night. He did truly care for her; as much as a Vampire could care for anyone. She was merely payment for a bargain her aunt made with him decades ago.
Now, Griselda was stuck here in this haunted hell of a hotel and relegated to maid status for all eternity. She rose slowly to her feet as the Zombie bellboys entered the deserted hotel bar and dragged out the bodies that were the unwitting ‘party favors’ for Anton’s guests the night before.
My job is to clean up the aftermath. Griselda cursed at the Zombies as their carelessness left a trail of blood in their wake. With a grunt, Griselda dropped a soaking wet mop on the wooden floor and began the backbreaking job of scrubbing it clean.
Another fine mess. 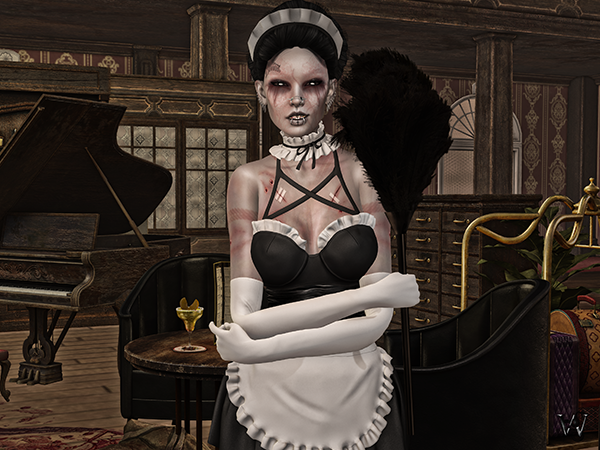 {what next} – “Housekeepers Box Decor (cream)”