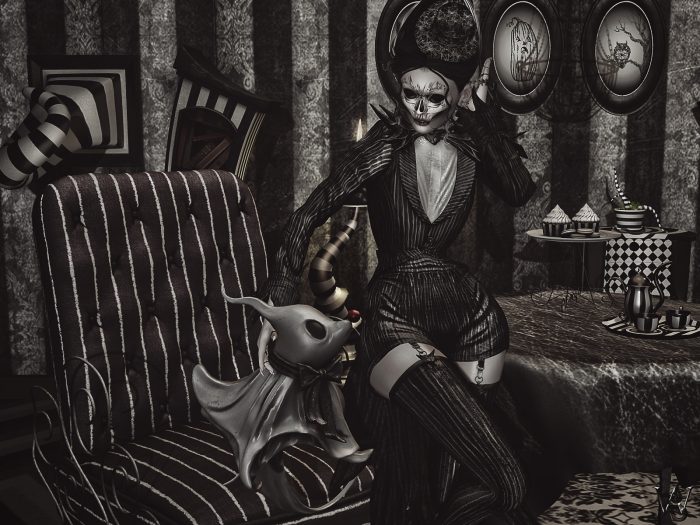 I’ve always been addicted to Tim Burton movies. Anyways if it was Beetlejuice, Edward Scissorhands, Sleepy Hollow or Sweeney Todd I do love them all and I saw them and all the others more than once! But I do love the most the “A Nightmare before Christmas” and the “Corpse Bride”. When I saw “A Nightmare before Christmas” the first time I instantly fell in love with Jack Skellington. I even had merchandising stuffs for my study equipment, bed linen and other stuffs in my room like poster and such. I do not why that clicked so bad but it did 😉 So I was so surprised when I was at CURELESS [+] and saw the Christmas Nightmare gacha – How I could miss that one?!? Certainly I had to have that no need to mention I never saw a more cool version for a female counter part of Jack Skellington. 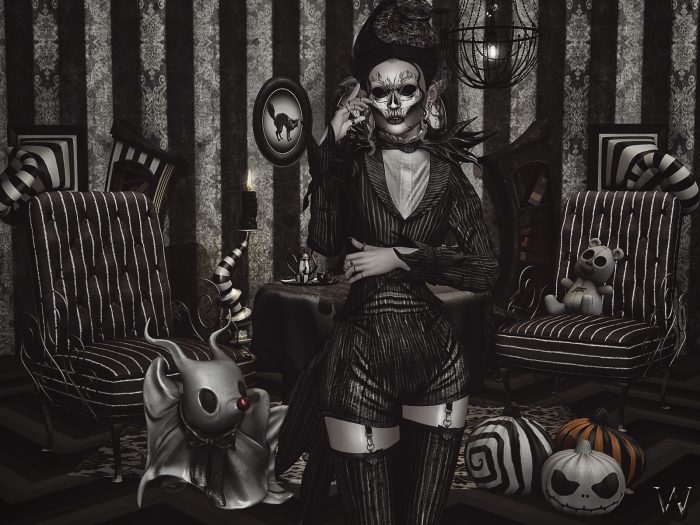 It is hard to explain sometimes that you are not in a bad or dangerous mood if you do dark pictures. I know it might be more common to do colorful country side pictures in SL, but I discover more and more that SL has a dark, artistic fashion corner as well and the more I try the more I really do love it. When I was trained as a model or blogger in the past, people did not approve my styles or pictures to much – not because they were bad quality, more because they were not norm or mainstream conform. Back in the days when I started it was important to have at least more than 50% mainstream and RL fashion trends covered somehow, but the longer I was blogging the more I developed a feeling away from deadline duties and so called “rules” to follow. I wanted more freedom to express myself, to experiment with more than just fashion and I was sick and tired of all the same pictures over and over, without soul but only fashion information stuffed. 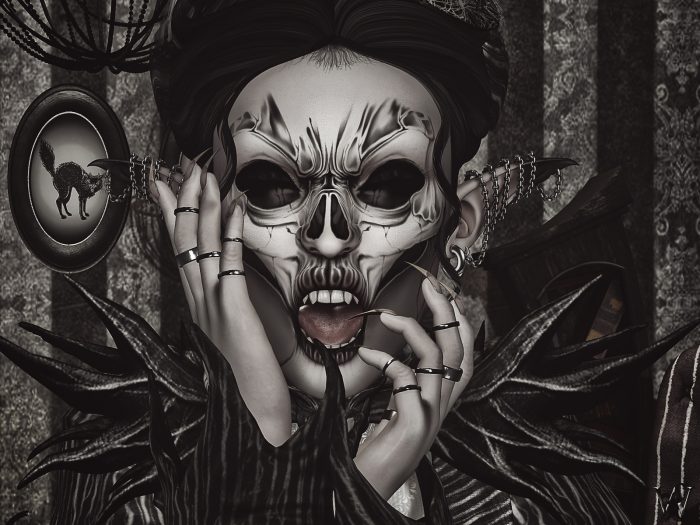 So I asked to be released off my blogger duties years ago and left blogger or sponsor groups, to have a fresh start and re-invent myself and my blogging/photography. For quite a while I did pictures without any sponsored designs and not for the purpose of design showcase only. I have to admit at that time it was needed to develop my picture skills and as well my blogging abilities. I thought a lot about what I felt and what I want to express, which I never did that intensive before. Before it was all about how many sponsors I can combine without looking like a clown, but still satisfy as many people and designers as I can with every post I did. It wasn’t bad all the time, but it is a different motivation and focus. Over the past 10 years of blogging, there was times where my pictures changed lightly, but most of the time they were sponsor focused only. After some time you feel a kinda burn out syndrome and past fun turns into work only.. and that killed my motivation at some point. I needed “fresh thoughts” if that makes sense. Pulling back was the right thing for me to do. For the past 1,5 years I started again to apply or take on sponsors/blogger duties, but not as many as I had before. I tried to not have just fashion pictures, I challenged myself to combine fashion with artsy touches and as well with feelings and emotions and sometimes even with a story behind the pictures. That as well made the decision easy, to not have one picture and a style card only, but to have a little picture series and sometimes a little story behind them, too.

I really got a whole new, different point of view about my blogging and the pictures. I still try to do showcases for designers and present their creations in the best light, but as well I try to bring my own twist and emotions – sometimes a little art as well – into the whole process 🙂 It brought back the fun for SL blogging and SL photography to me again and that I guess is all that matters… at least for me 😉 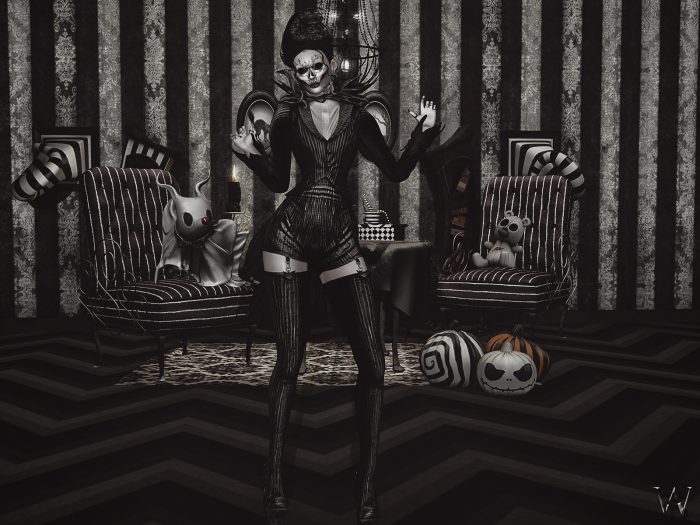 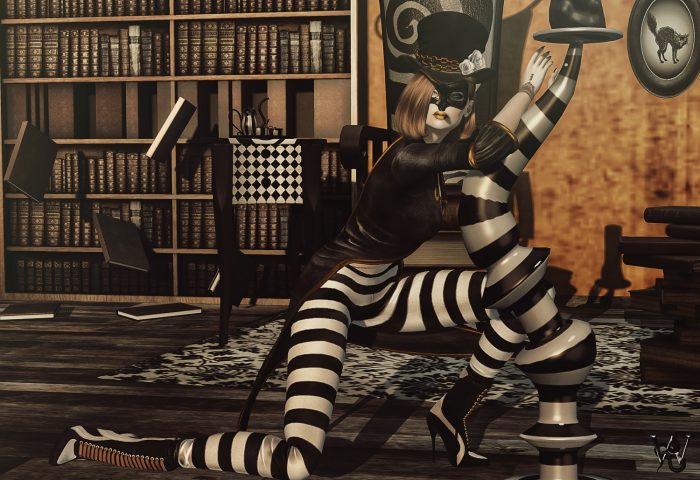 I sense there’s something in the wind, that feels like tragedy’s at hand.

And though I’d like to stand by him, can’t shake this feeling that we have.

The worst is just around the bend.

And does he notice my feelings for him?

And will he see how much he means to me? 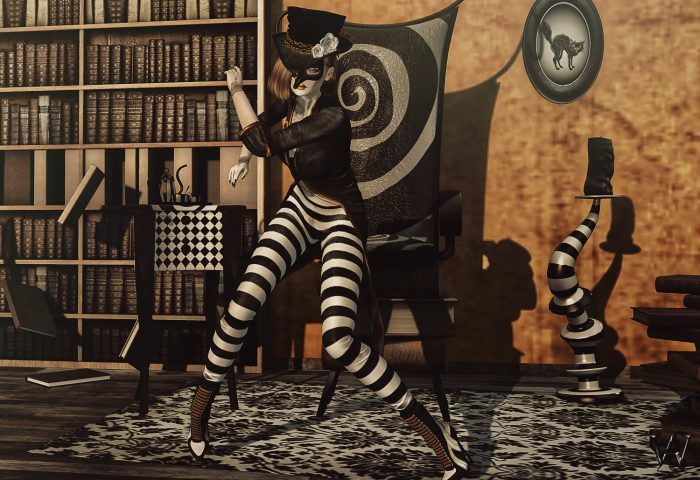 That I am a Tim Burton lover is not a secret. I love the movies and I as well love t he architecture and the clothing that is used in all of the movies. Anyways if Nightmare before Christmas, Corpse Bride or Beetlejuice ( and so many others certainly) – I am an addicted and saw them all more than once 😉 I love the dark humor and the way how Tim Burton expresses things in his movies.

When I saw the “Elvina” outfit from .AiShA., I instantly had a ‘Buronesque’ idea in mind.

The striped leggings immediately pulled the “Burton” trigger in me :p 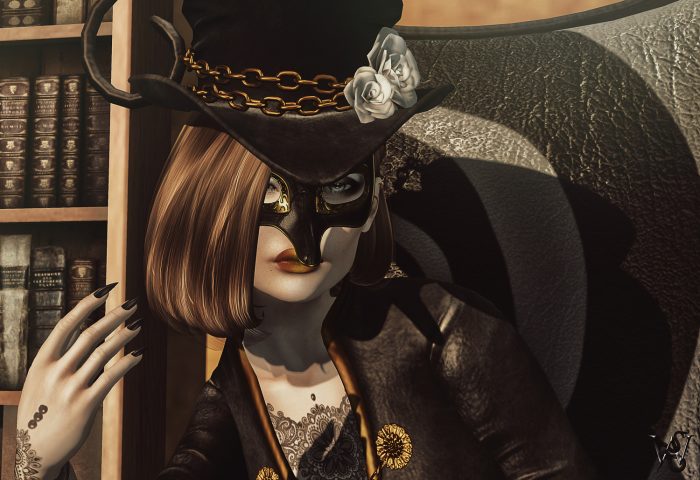 When I was looking for some furniture for my set, I just typed ‘Burton’ in my inventory search and had a lot of things coming up, that I already forgot that I have them!

I played around with the “Inspired by Burton” set from 22769 and completed the set with a bookshelf from Toiz and some parts of the “Burton Tea Party” from Cheeky Pea. I liked the shelf with the books falling out so much for the whole scene 😉 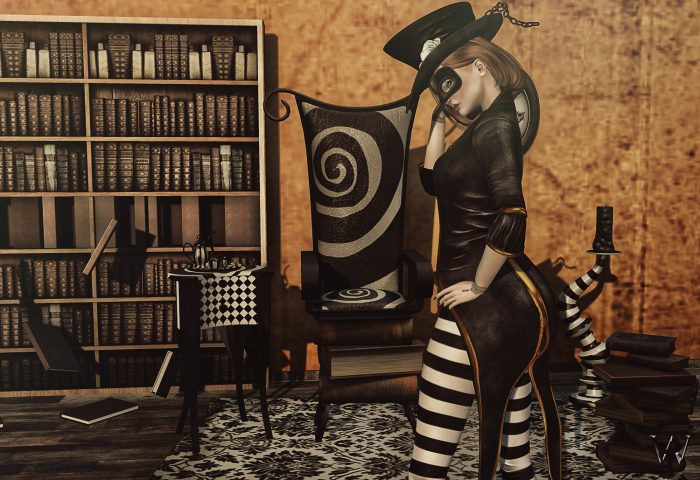