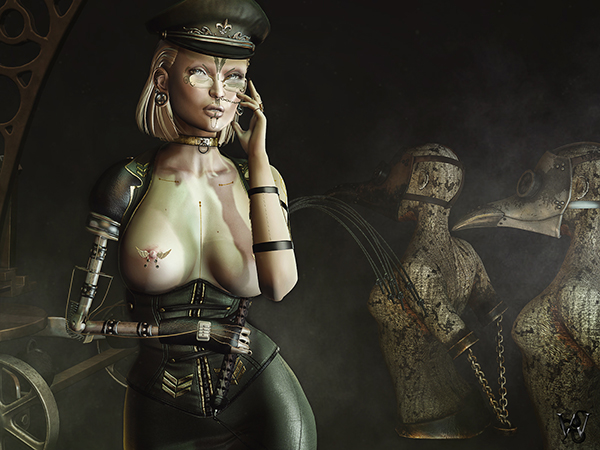 As I was threatening in my last post – her is the Engine Room part 2! *snickers*

Today with something more naughty, but still in a vintage, maybe today more dieselpunk looking way. Now you might scratch your head and think… usually she talks about steampunk and now she throws in a new word called “dieselpunk”, but actually it is a different genre, even if there is a lot of cross over happening in fashion. Lets take a look at the “Dieselpunk Encyclopedia“…

“Dieselpunk fashion blends the styles commonly found during the diesel era with contemporary styles to create a fusion of both. The “punk” nature of the subculture comes from expressing a more complete presence in public akin to the fashion styles popular during the diesel era such as waistcoats, covered arms, hosiery, styles of shoes, and head wear to name a few. Military and paramilitary also counts, especially related to genre icons. Dieselpunk emphasizes the inclusion of such accouterments to render one’s look “complete,” in defiance of modern custom.

The now defunct blog Gearing Up was one of the first web sites dedicated to dieselpunk fashion. Despite its domain name (dieselpunk.net) it promoted mostly steampunk costumes and accessories but also helped to define the style and to point out the difference between Diesel and Steam… Generally, dieselpunk fashion is not (and never was) restricted to formal dress or military uniform. It includes a broad range of styles, from 1930s colonial to 1940s bomber jackets, from posh zoot suits to humble working-class overalls. Sometimes a light touch of style, like a vintage wristwatch, a pair of Art Deco earrings or an old-fashioned petrol lighter, is sufficient for a fashion-conscious dieselpunk.” 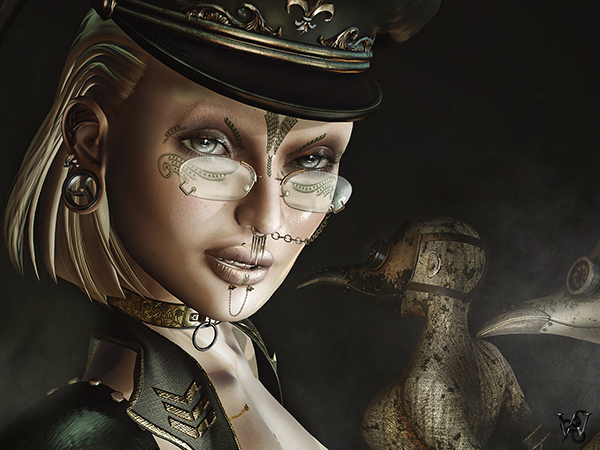 When I saw that awesome bondage crane from Dictator Shop while I was wearing that super naughty, but kick ass cool and military looking “Disciplinarian” dress from CerberusXing, the dieselpunk idea was born in my mind. I do love the combination of steel and military inspired fashion with a little touch of fetish as well 😉

First I was tempted to cover up my chest with a black bra, but then I thought that would drag away the attention off the dress too much and when I found that cool nipple piercings in my inventory, which had a touch of a military decoration, the desicion was made.

The incredible detailed and interesting face art was made by Skye Nefekalum, an artist and friend which I do admire for along time for his creativity and skills. The “Shaman Series – Earth” is one of an amazing series of the 4 elements and it does come in black, color and one white/tintable version as an Omega applier. With that it is compatible with most of the mesh heads in Second Life.

What really caught my eyes are the “Mistic Glasses” from The White Crow. They do come with a tattoo for face and body, but for this post I only used the body part or it to not mix up the face art I already was wearing. The interesting part of the glasses are that they are “pierced” into your nose and do not have frame temples at the sides – those of you who know me, know that I LOVE such things 😉 They are available in 3 different colors and are resizable so you can customize them perfectly to your head.

To get an even more dominant touch for my pictures, I did add three of the “Unfortunate Destiny Mannequins” and put the new “Plague Masks” on them, which you can wear yourself a well as you can see in my last post (HERE) – so I was able to show all the colors that are available at the event 😉 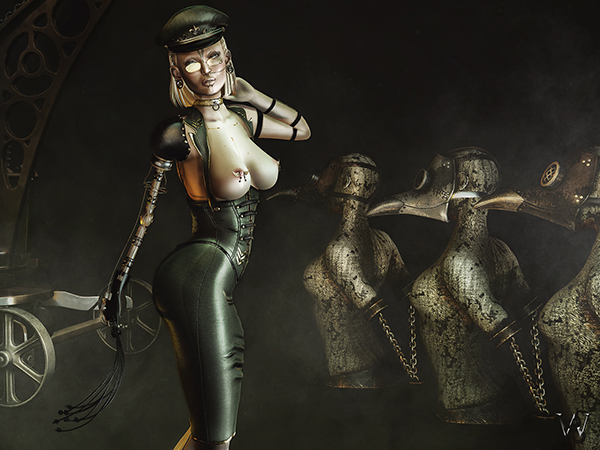