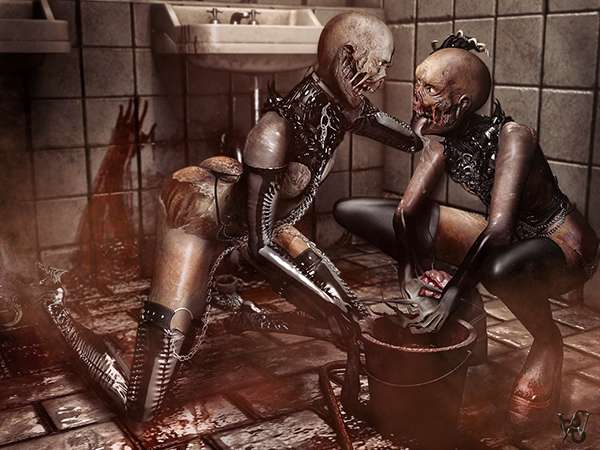 The craving for human flesh drove the creature into the early morning fog. In the cemetery awaited a new grave and sustenance. As it neared the fresh mound of dirt, the sound of heavy footsteps stopped the creature.

Two men, hunters with rifles slung over their shoulders, approached the forest near the creature’s hiding place. Dense trees and heavy foliage darkened the wooded corpse. Only a stray beam of sunshine could break through the heavy veil.

It followed quietly behind the humans. The hunters were now the prey. With each silent step, the creature shifted into wolf form. If somehow it was seen, a wolf in these woods would not raise an alarm that its true form would.

The first human made no sound as the creature sprang from its cover and easily snapped the man’s neck. The human in the lead turned to speak to his companion, but was dead before he could aim his weapon.

The creature chuckled as it shapeshifted back to its nature form. Humans are so easy to hunt. Their arrogance makes them careless. As if their weapons could ever harm any of its kind.

The young ones will benefit from the blood and after a week or two, the rotted flesh will be quite tasty. For now, it needed to return to the grave as planned. It had no taste for fresh meat. Only rotted, decayed flesh would satisfy the gnawing in the pit of its stomach.

Working quickly, in case more human hunters were about, the creature clawed through the fresh dirt to the plain wooden box buried deep. Oh, this one was a fat, succulent morsel of a man. Women tended to be too lean and children were hardly substantial.

The temptation to feast now was overwhelming, but the creature dare not spare the time. The risk of exposure was too great here in the cemetery. It closed the now empty casket and returned the dirt so no one would be suspicious.

Careful to leave no evidence behind, the creature picked up the body as if as it weighed nothing. It returned to the woods where it left the two hunters stuffed beneath the remains of a fallen tree.

It was a good day. Food aplenty for months. But winter was approaching. It would need to forage a few more times to insure a comfortable hibernation before the first snow fell. A ghoul has to do what a ghoul has to do to keep her family fed.

The creature returns to its lair. an old and forgotten slaughter house far from town. The perfect place to hide and raise its young ones until it is time for them to leave the nest. Its children should be sleep now, but will wake soon and demand food.

Yet one is missing – the eldest. A lopsided smile creeps across the creatures face as it carries the food to the preparation area. There, hard at work draining the blood from a fresh corpse, is the eldest child. The young one looks up with a look of apprehension, a need for approval.

The Ghoul drops the corpses to the floors and slowly approaches the young Ghoul who is squatted on the floor beside a blood filled bucket. Its hand caresses the young one’s face as a sense of pride washes over it. A macabre smile appears on the Ghoul’s face. 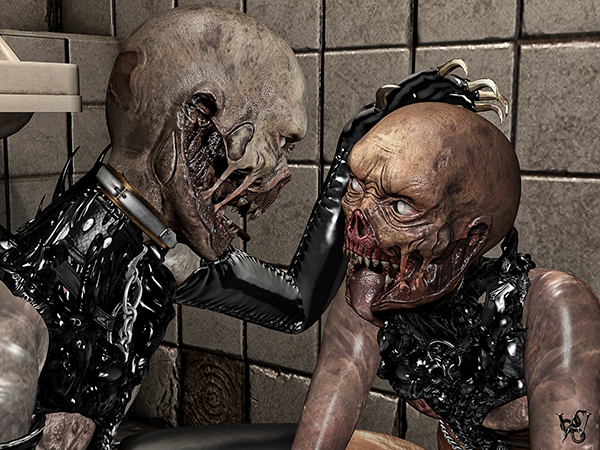