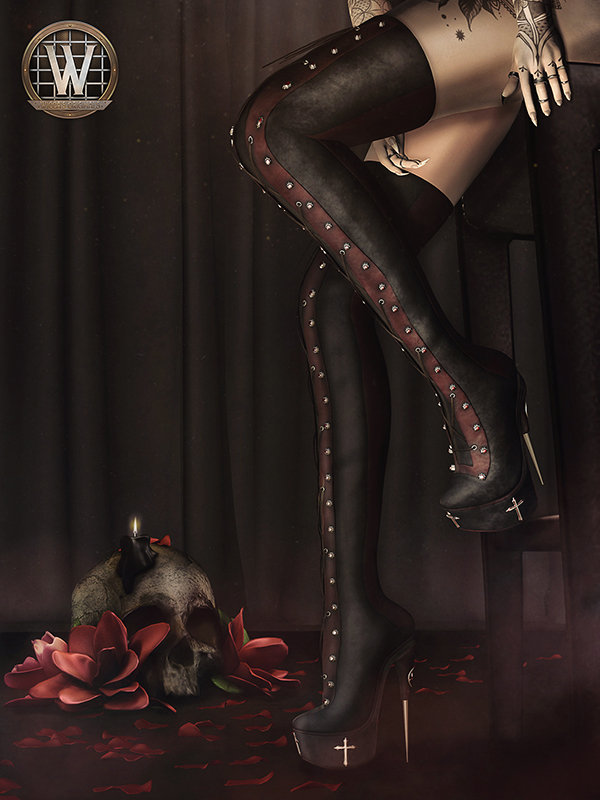 At first glance, subject appears to be another tall pair
of boots, rising to the mid-thigh. A set of studs line the front of
the two-tone, subtly patterned material, providing security for the
lacing which criss-crosses over the leg, binding the boot securely
and snugly to shapely legs. A tall heel works in conjunction with a
high pitched arch of the boot's outersole to lift the wearer's foot
to a pleasant height, tightening the leg muscles and buttocks in
order to support the pose.

However, those trained in the esoteric and
the strange may recognize that there is more to these boots than
style alone. The inclusion of three crosses wrapped around the front
of the platform seem to promise either protection against or command
over demons and spirits. With the inclusion of the inverted pentacle
on the back of the heel, the latter seems more likely. These are the
boots of one who dabbles in dark arts, who makes deals and consorts
with devils. As a last resort, this particular set of footwear arms
the wearer with a very sharp, tapered heel spike, which is capable of
being changed out with different metals. It is well documented that
some extraplanar beings are susceptible to different sorts of things,
silvers, irons, some even respond to gold or brass, so this seems a
very deliberate choice. Recommended next steps for this investigation
are to track down those who have acquired a set of Lagoa Boots and
observe them, covertly if possible, in order to see what connections
they may have to the other world. This pair of Lagoa Boots will be
kept for 24 hours for continued study, after which time they will be
destructed in accordance with protocol. Other pairs may come in up to
10 color options and metal options, for Maitreya, Legacy, Freya, or
Hourglass bodies 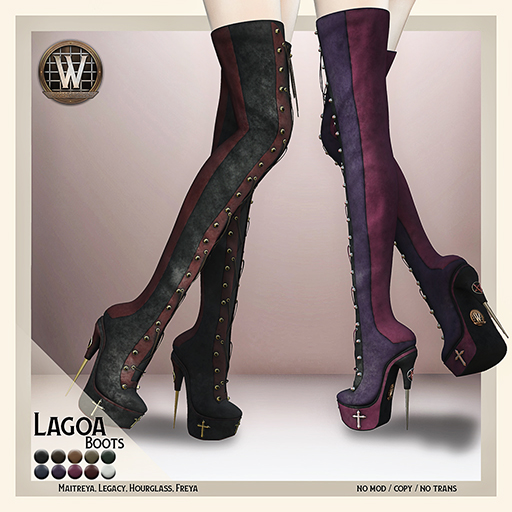