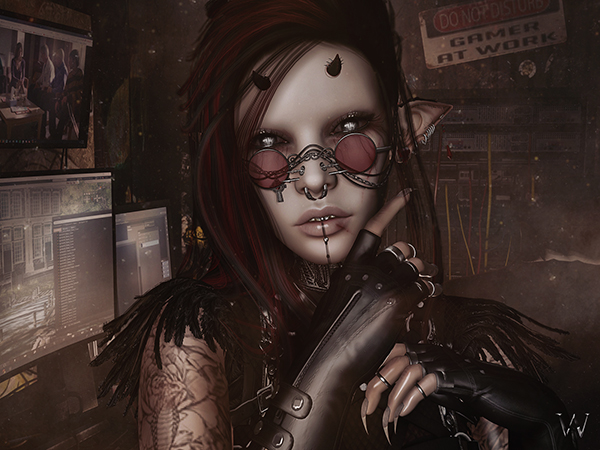 Everyone’s a sinner, baby
And so are you
We don’t really need a reason
For the things we do

Yes, finally I found myself in the new Avalon head, but that was quite a journey and without someones help I probably would not have made that…

When I tried the 3 new head releases of LeLUTKA for the Skin Fair 2021, I first liked Ceylon the most. After fooling aournd with all 3, it turned out more and more, that the Avalon head features most of the things I like for Wicca’s face. It takes me in forever if I am finally willing to change to a new head, to find the right skin, the right mods, make the perfect shape… that is why I usually avoid changing heads often for my main character – blogging other heads is a totally different thing, that I actually enjoy, as I can built a character I have in mind at that moment when I do the pictures.

I wanted to try a look with an Albino skin – as I always loved the special features of that very special kind of skins – plus my I had the imagination my “no brows” policy would look lovely with that. I tried various skins from various brands inworld and from Marketplace. It seems I have a different vision of an Albino skin that most of the other have. All I found was either something Goth/Vampire looking or some cute, pale, rose skins with glowy cheeks and/or glossy, kissy lips kinda girly/dolly looking – that was not what I wanted…

A little frustrated I gave up on that thought and just went further with looking for pale, porcelain looking skins. And as fate plays out, you find what you are looking for completely unexpected. I was looking though one of the weekly sales events and my eyes got stuck on a skin. Unfocused and fidgety as I am, something came up and I got distracted. A few hours later I had a talk with Vivien and she reminded me of that skin again and I jumped over there trying it. When I saw what it did to my head, I was just speechless. I never had heard from that skin brand before and what I saw did really blow me away. A skin, very detailed, amazingly toned and without the typical girly look on it even without any face mods – not yet as edgy as I like it, but better than anything I was trying before. Certainly it was just the face as so often lately – I come from a time (before appliers came who made it reasonable to part the skin in body and head as you needed one applier for each) where skins used to be in one piece and not split up in head and body if both are “layers” (BoM) – so I took a look, how much the body part would be and how it looks on my body. I was amazed when I saw, that the body skin had an affordable prize as well and so I got face and body skin.

Back at my working space I sat down and worked on my shape for hours – If you ever tried to make a new shape from scratch, you know how long that can take. After 5 or more hours I finally was satisfied and happy and wanted to share my result with dear friends of mine. So I knocked at their screen with an IM and got a teleport. When I arrived there, I still was so excited about my new “me” and asked, what both of them would think about and I got weird and confusing answers like “Maybe you should fix your eyes they are poking out a little” or “Maybe the piercings need a little adjustment as they look out of place”. I was completely confused… I usually look very closely on my attachments and how can rigged eyes made for the head look out of place?!? I mean I know both of them are perfectionists like me and so I started struggling and caming on myself again, but I didn’t see what they seemed to see. So I did a gayzo and showed them my view. I got 2 gyazos in return and my blood froze in my veins – THAT was not even close to what I saw. The first things I could imagine was trying to undeform my avatar, which didn’t do anything so I came to the idea of toggling my shape with an older one… and then I was shocked. When I opened my current outfit folder, I saw that I am not wearing any shape at all! It was a huge surprise, because usually you cannot take off a shape completely! I went to my shapes folder and realized, the shape I was working on wasn’t there at all and some of the shapes I made the days before were missing, too. I opened the last safed shape and looked at the date and it said 3rd of March – We have beginning of April now!!! WTF?!? Ok, we all know SL and how it can act up sometimes, so the first thing I did was I relogged, hoping that it would just be a bug and that would fix it. When I came back, the shapes were still gone and I realized there are other complete folders missing too in my objects folder. Slowly panic raised up my throat and I thought I might have to clear cache, since I didn’t do that for a while – again nothing… I know it is just Second Life and I know that a shape isn’t something to whine about. BUT if you spent like a whole day to make something and then it is gone, you have nothing to remake it 100% again, as you didn’t make notes of any numbers… It IS god damn frustrating and I found myself in a mixture of madness, sadness, anger and rage. It was at the middle of the night and I was the only awake person in the house, so I could not even talk to someone and yell out my feelings to get rid of them. But if you have really close friends on SL, they even can “smell” though the web, over the ocean, what you are going through and all of a sudden you get an unexpected call. First I was scared to take the call as I didn’t want anyone to hear in what a condition I was, but if you respect someone, value his friendship and especially if it someone that shares your certain lifestyle, you better pick up that call. So to the mixture of already existing emotions, I felt nervosity adding and I was lightly scared as well, but I took that call – it turned out that it was the best thing I could have done. Even if he sounded serious and partwise firm, he calmed me down and he pulled me out again from that dark corner I was starting to draw myself back to. I still was mad about what had happened and sweared to just trash the whole idea of that new head and go back to my existing one. But that didn’t seem an option for him either and he tried to insist on the fac,t I just should restart from scracth and that if I made it once, I can do it again. At the end of the call he sent me to bed to get some rest and to a fresh restart on the next day – I didn’t see that happening at that point, but since the sun already was rising, I logged out and went to bed. I still hoped it was an SL bug and maybe I would login the next day and everything would be back to normal.

Certainly that wasn’t the case and I alredy switched back to my old look when I got an IM with a new vendor picture – The Hunger tattoo, which kinda became a trademark for me on my old face, made for the new EvoX heads. DAMN… suddenly I did remeber that I was harassing him at least 3 times yesterday, to make a version for the new EvoX heads – he said he would do that when he feels like it is time to do so. And now…? I felt it was kinda on purpose, to force me back to work on that new Avalon head… how mean… and how effective! Today I just wanted to do a quicky of my new look, but I will take those glasses off soon to showcase that incredible new version of the Hunger tattoo made b Nefekalum Tattoos. This new version for EvoX comes in different colors and matching materials for your LeLUTKA EvoX head. The reason why I am saying that, would be that I know it will go on the Wanderlust Weekend sale on the 10th and 11th of April and you have the unique chance to get that incredible, amazing design for only 50L$ before it rises to its regular price at them Nefekalum Tattoos main store!!!

Thank you Sir Skye, for catching me in that particular night and for the time you spent to talk to me… and certinly as well for making me sit down on my ass and work on that shape again 😉