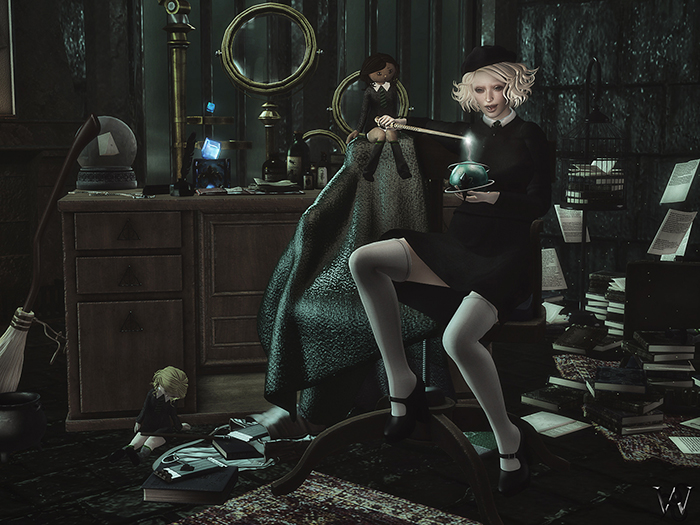 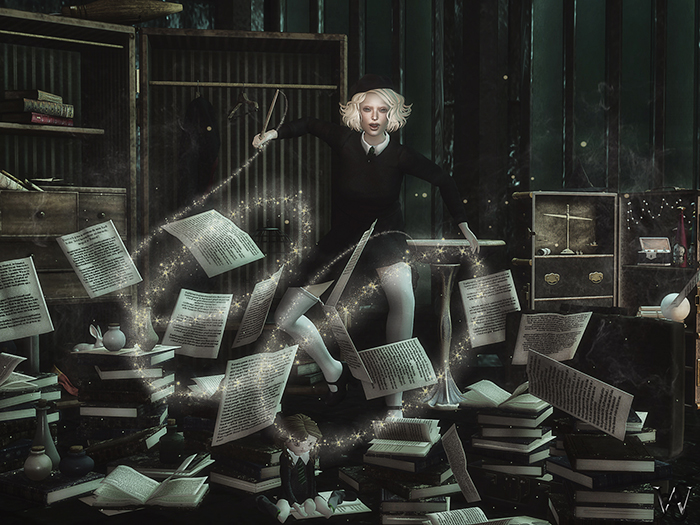 Like I did mention in my last post, the “World of Magic” event sadly is over, but I still want to post all those amazing things – it gives me the feeling it would still going on :p . I am sure you will find all of the creations at the main stores of all brands by now.

This time I have the whole scene built out of designs of the event and for the clothing I as well only used items from the “World of Magic” except the shoes.

I love Trouble Dethly’s events, he always picks interesting themes and does invest a huge effort in the sims and event places and builds. What I do love as well are his ‘Fashion Theaters”. To me that is the future of fashion shows in Second Life, as most of the main grind users are sick and tired of boring runway shows. Every thing has its time and realistic, real life like looking fashion shows had their time in the past. When they were new, many people went there and the audience was more than just 10 to 15 models and designers. I remember times, when we had to cap sims at 45 people, to make sure shows could run smoothly, or we even had to have 2 different sims beside each other – one for the audience and one for the models. Those times are gone. I really think there were too  many of those shows in a short time. Certainly there are a few agencies left who still try to do shows, but designers as well found a different way for marketing with all the monthly events. I would not choose one over the other, both ways have/had their advantages and times.

The “Fashion Theater” that Trouble more or less invented in Second Life, combines fashion shows and theater. Usually we have different scenes like in a real theater, and in the beginning of each scene the credits getting read out before the actual scene starts. So it is as well informative about fashion, designers get highlighted and used decor gets it’s spotlight, but at the same time it is entertaining with the story itself. Even as a model – I do have to admit – it is a lot of fun as you prepare different, it is a new challenge. You style up like you would do for a normal fashion show, but with posing you have to be way more creative and it is way more work intense to find the right poses, or even short animations, for the story that is going on, as your character has certain “tasks” to implement in terms of acting what the story determines.

Thereafter was the first Fashion Theater I did and it was a huge success. Back then we did a post apocalyptic version of the ‘Taming of the Shrew”. The story was adapted to the different genre and lightly changed, but the essence was the same. The last one we did was “The Tale of the Three Brothers”, an adaption or a tribute to the wizarding fairytale told to young witches and wizards in the world set by JK Rowling. Within canon, it is believed to have been written by Beedle the Bard and published as part of his works called “The Tales of Beedle the Bard.” Most believe it to be a story that teaches children the virtue of humility and wisdom. Others, feel that it is in reference to the Deathly Hallows. For the Potter fans, the concept made it’s debut in the seventh book and are considered three highly powerful magical artefacts.This time we had a very small cast, but we had tons of fun.

I would like to thank Silly Avro, Luka Benton, Sungyoung Holloway, Redclaw Inshan and Trouble Dethly for an amazing time, lot of fun rehearsals and 3 wonderful evenings of acting. Trouble had the most work since he wrote the whole thing and had to coordinate our chaos troupe and he did a hell of a job with that.

I can’t wait for the next one and I do not want to tell too much yet but… I have a feeling it will have to do something with doing a tribute to GoT and I will keep my fingers crossed to be casted as the Dragon Lady!