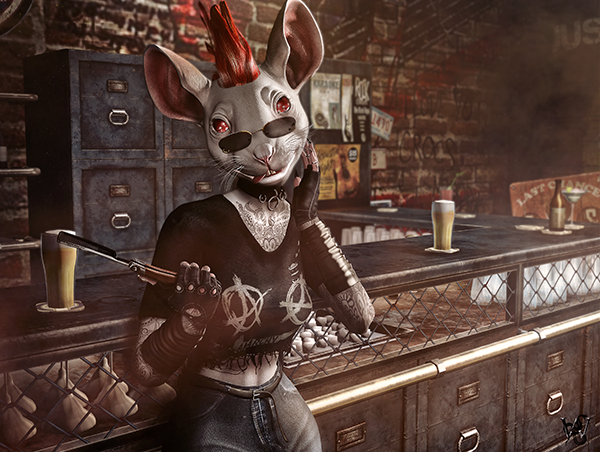 With ease and a practiced flick of her wrist, Snot flips the switchblade in her hand open and closed, over and over again. Slow at first, the action became a blur as she increased the speed. With a loud sniff, Snot wiped her nose on the back of her arm. Yes, that’s how she got her name.

Her eyes scanned the room, noting the position of every patron in the roadhouse bar. Rats, Mice, even a Squirrel or two sat at the makeshift tables and chairs they scavenged after the Apocalypse.

The Apocalypse – the day when the humans destroyed their own species and elevated others into higher forms of life. The Mice were the thinkers; the planners. The Rats, Snot’s ancestors, were the muscle; the heavy lifters. Squirrels were the scavengers; the trackers who found human items and made them useful again.

It’s not that Snot was against afternoon sex or cross species mingling, but she was on duty and took her responsibilities seriously. Especially today, when a contingency of Weasels was scheduled to arrive to meet with the local Mice leaders. Snot would not allow any distractions.

The survivors of the Apocalypse were determined not to make the same mistakes as the humans, but even in their un-evolved form, animals were also territorial and bloodthirsty.

Speaking of the devil, a pair of oily looking Ferrets stroll into the bar and survey the surroundings. Just like the Rats, the Ferrets were enforcers; bodyguards to the Weasels in their own little part of this messed up world.

Apparently satisfied with the room, they step back and hold the makeshift door open of Wartman, the leader of the Weasel encampment up north. Macro, the leader of Snot’s community, stands to greet the arriving leader.

Today was about peace, cooperation and trade. That didn’t mean Snot wasn’t prepared for trouble as her eyes continued to scan the room. It was the Rat’s nature to watch for danger. After all, they were all animals in one fashion of another.

The evolved species that developed from the human’s global devastation were determined to live together in peace. They would not follow in the footsteps of humanity and allow hatred and aggression to rule the Earth again.

Or with evolution, was human nature far behind? 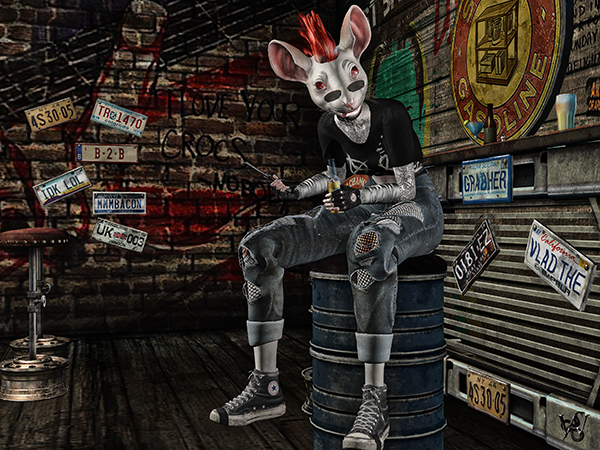 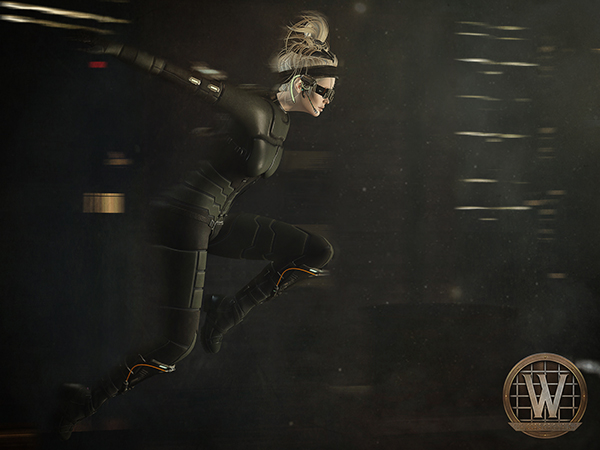 Kevlar vests are all well and good, but what about the rest of the body? Wicca’s Originals has you covered, with the Guardian Suit. Coming in three pieces which can each be worn independent, the outfit, gloves, and boots, the Guardian Suit offers great protection without sacrificing mobility. The material is made up of a combination of plasteel panelling and synth-thread weave, providing effective defense against ballistics and cuts, while also softening any blunt force. The panel over the groin is secured by several buckles, allowing the wearer to ‘do their business’ without removing the entire ensemble. Our Guardian ensemble is designed to protect both men and women and is rigged for Gianni, Lara, Hourglass and Freya. Comes in six colors, get yours today! 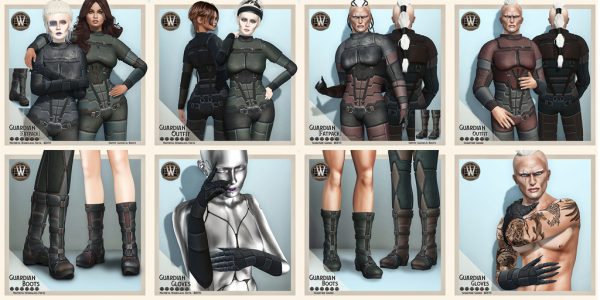