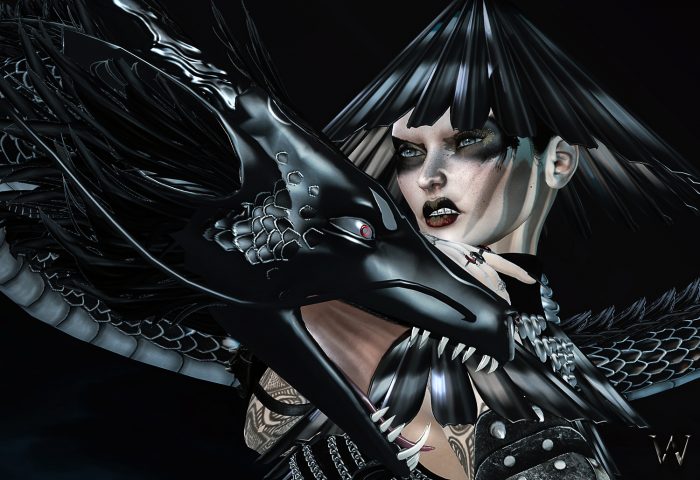 I got  wonderful present from my sister Daff – Those 2 awesome dragons!

The whole post and pictures turned out different from I first thought of it. Many times I was called freak and weirdo, but does that always have to be bad?

What does it mean to be a freak?

“In current usage, the word ‘freak’ is commonly used to refer to a person with something strikingly unusual about their appearance or behaviour.” does Wikipedia say.

If that just means different from the mainstream and as well a little crazy – I take the freak. Sadly to many ppl freak has some bad taste, probably because of the old sideshows, where people with genetic abnormality looks were showcased. That all usually was thought to scare people or as well to show them ‘creatures’ live among us. To me it is sad how some people react to such abnormal things, but probably that does belong to the fact, that many people being frightened by things they do never saw or do not know more about.

Maybe that as well applies to those who call me freak in a bitter and bad way. They are scared off things they did not see or do not understand, or they just have no fun in any life and have to make others miserable. For those I just feel pity. It must be horrible to wake up everyday and the only thing you can think off, is trash and bad mouth other people…

Those do not earn one minute of your thoughts, as their only intention is to make you feel sad. No word or argument can convince them to change their mind, because they are not looking for any serious facts 😉 Just don’t feed the troll and ignore them. Any word you will give them will be twisted and changed as long as it fits their own arguments – you can’t win, it is senseless and wasted time. You can use that time for so many other and more productive things 😉 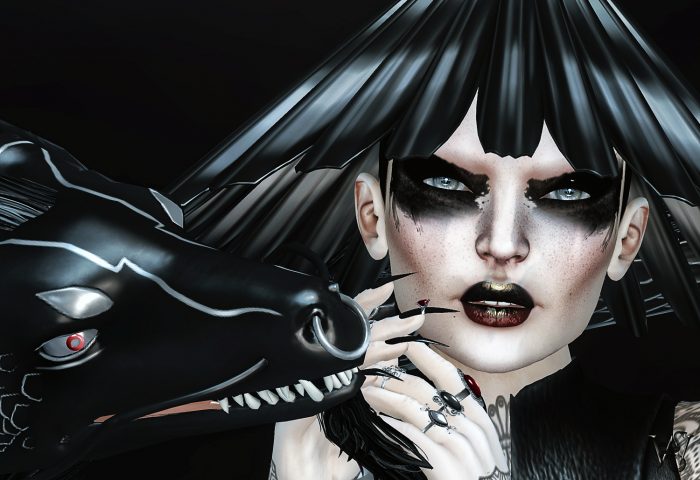 I am not trying to be all different or force myself to not look ‘mainstream’ like. Sometimes it just happens when I style. I do not think about my styles too much. I just go and play with different accessories, clothing and makeup. Sometimes it does turn out freaky and sometimes not. For making pictures the more crazy looking ones are usually more interesting than just a sweet outfit on a random SL sim, but all have its right to exist and as well their certain purpose.

Secondlife to me is a place where you can express and do so many things that you either can’t do in RL OR that are just impossible by nature. We do not have dragons, or fantasy creatures and most of the time humans have no wings or hooves or what ever you can do in Secondlife.

I do enjoy the fantasy side a lot, as it gives you the room for creativity. I know some people enjoy the realistic side more and that is ok too. For me it always depends on my personal mood and emotions what I wanna go for when I start playing with my inventory.

To me Secondlife should have the freedom of doing what you enjoy no matter what as long as you do not hurt other people and their feelings. I do not want my Secondlife being a 100% mirror of my real life, because then there would be no reason to log in 😉 I love to experiment, to play Barbie with my pixels and dress them up to what ever I feel or want. 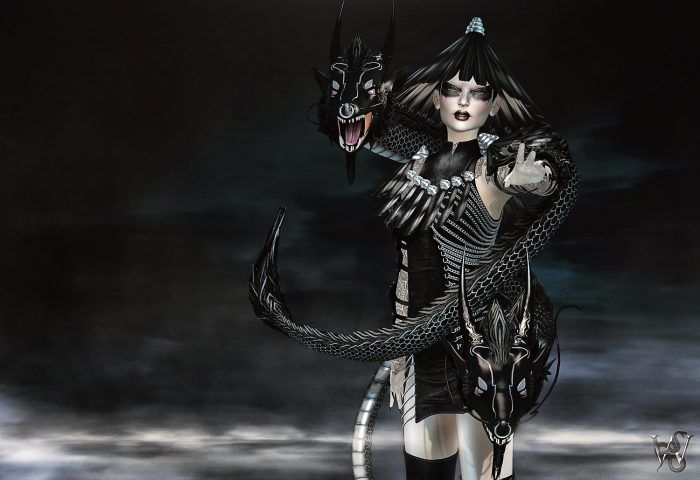 I was only playing around with them first, but the more I tested them the more I wanted to do something with them. The “Fierce Dragon Brother” are a gacha rare and they are animated! The move by themselves on default and in certain poses they even react to the movement. You need special bento poses, as the upper dragon uses the wing bones and the lower one reacts on the hind leg bones.

At 4Mesh I saw one of the new releases from Zibska. With the headpiece and the shoulder/chest part of the outfit, combined with the new “Fenris” dress from Moon Elixir, that I found at We♥RP it was the perfect outfit for the dragon brothers.

As much as I tried to make the whole style not be too dark – I guess Halloween is too close and I am way to excited for my favourite ‘season’ of the year – It became darker and darker with everything I added.

I loved the makeup, as it looks like a loosely painted black stripe over the eyes, lightly messy but as well somehow mysterious. The wonderful rings are bento enabled rings from MEVA. The “Victorian Bento Rings” come with a huge HUD. With the HUD you can hide single rings and as well can color all the gemstones separately. I really do like those options! 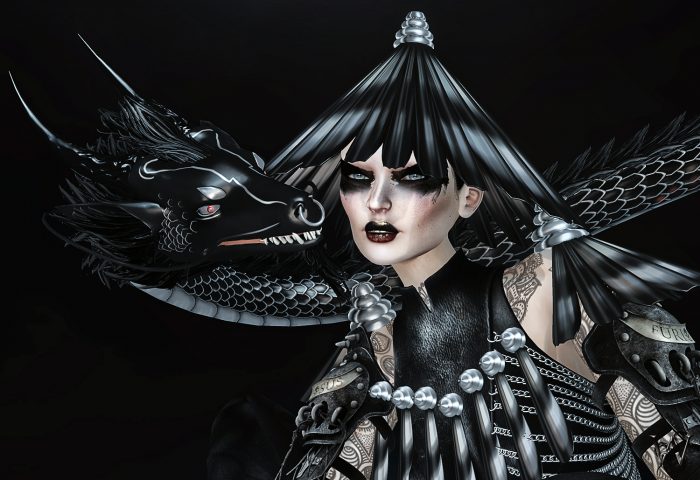 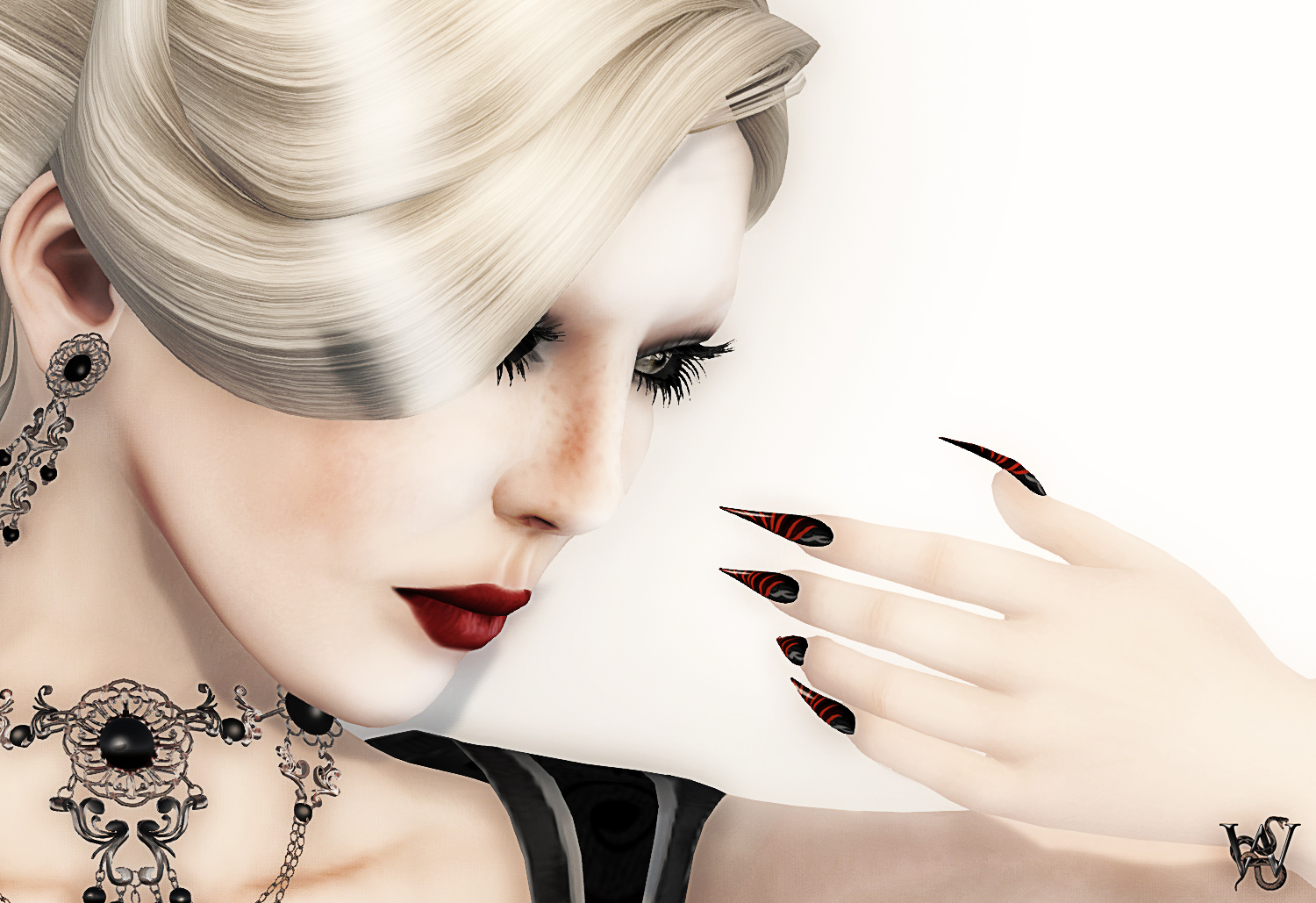 Lately Ivi Bing, owner and designer of Formanails IMed me and told me she made some new nails, rings and accessories for the Slink mesh hands. This was something I really missed so far! Since I have my mesh hands I do not wanna miss them anymore. you can find all kind of nail polish out there for the Slink hands nail appliers, but actual prim nails or jewelry not that much, especially not with accessories to them. So I would like to make a little spotlight for some of those amazing creations. There are so many more and some really amazing nail polishes for the Slink appliers as well at the Formanails Mainstore, but for today there will be some of the for me most exciting and extra ordinary sets 😉

For the styling I tried to keep as much the same to not drag any attention from the nails, but as well I wanted some amazing ‘base’ for the picture. So I used the “Amita” hairstyle and the “Elbensoul” jewelry set from EMO-tions. 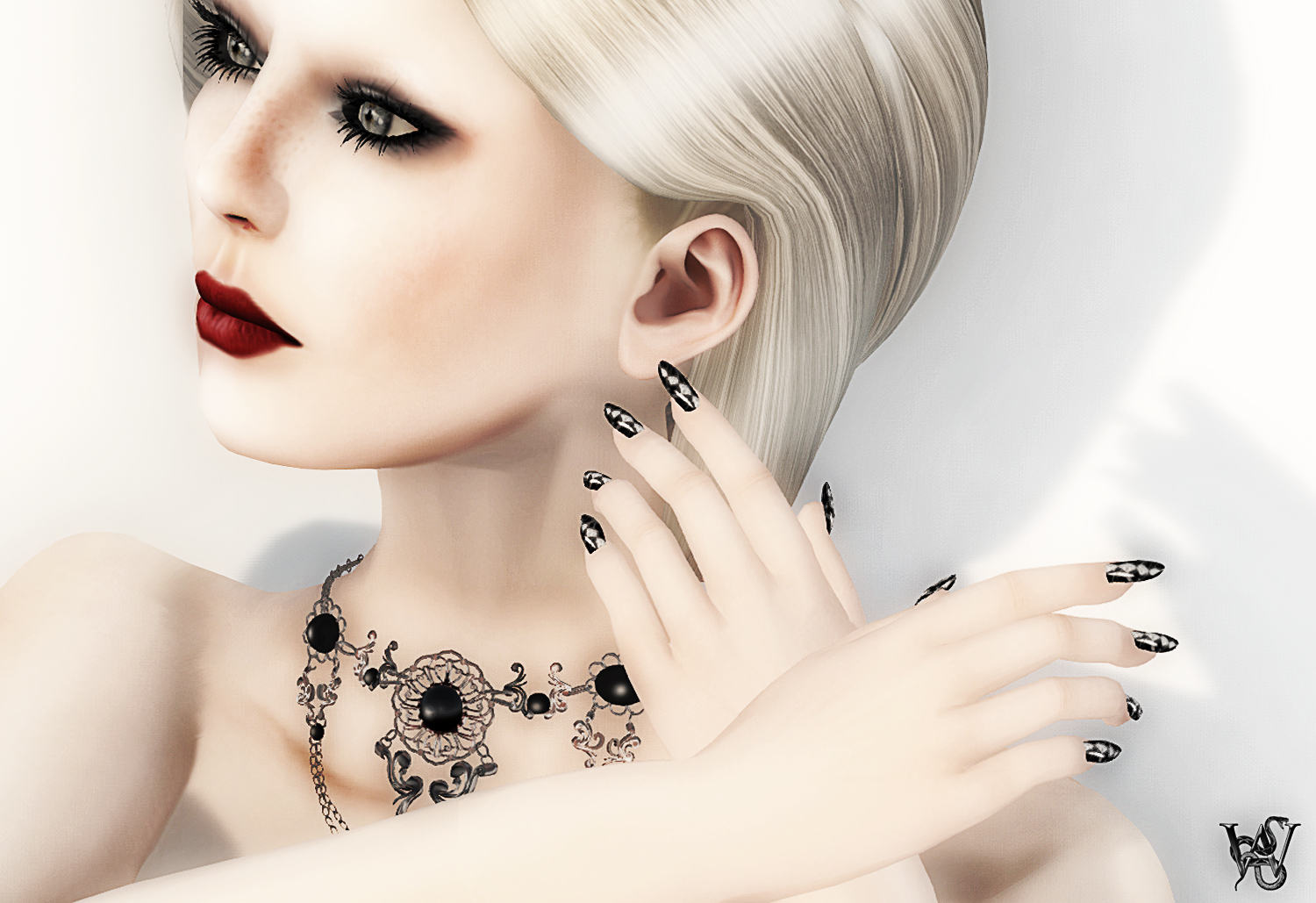 The “Form Oval” nails are mid long prim nails with a sharp top end. Via a menu you can change between different nail designs. To wear the nails correctly you need to resize your avatar hands to zero otherwise the nails and accessories go out of place. The Slink mesh hands actually react on the avatar hand size so the hands get smaller if you feel your hands are too small like it was for me you can try to wear a bigger size of the Slink mesh hands. I changed from XS to L ;). For now you only will find most of the prim work for the Slink hands for the casual and the elegant version of the hands, wich are the most used ones anyway. Just make sure, you have the right hand style when you buy some of the new designs ;). 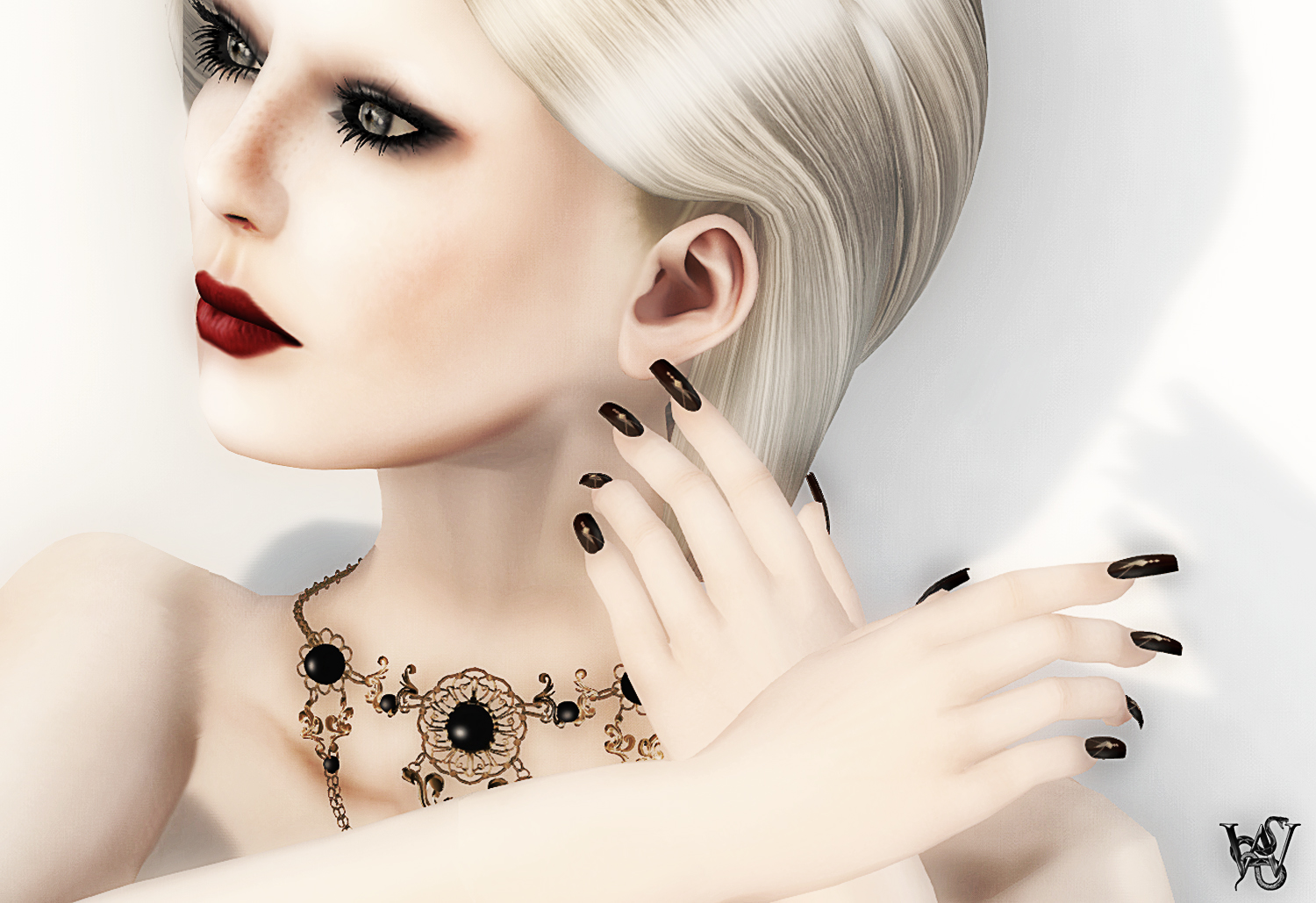 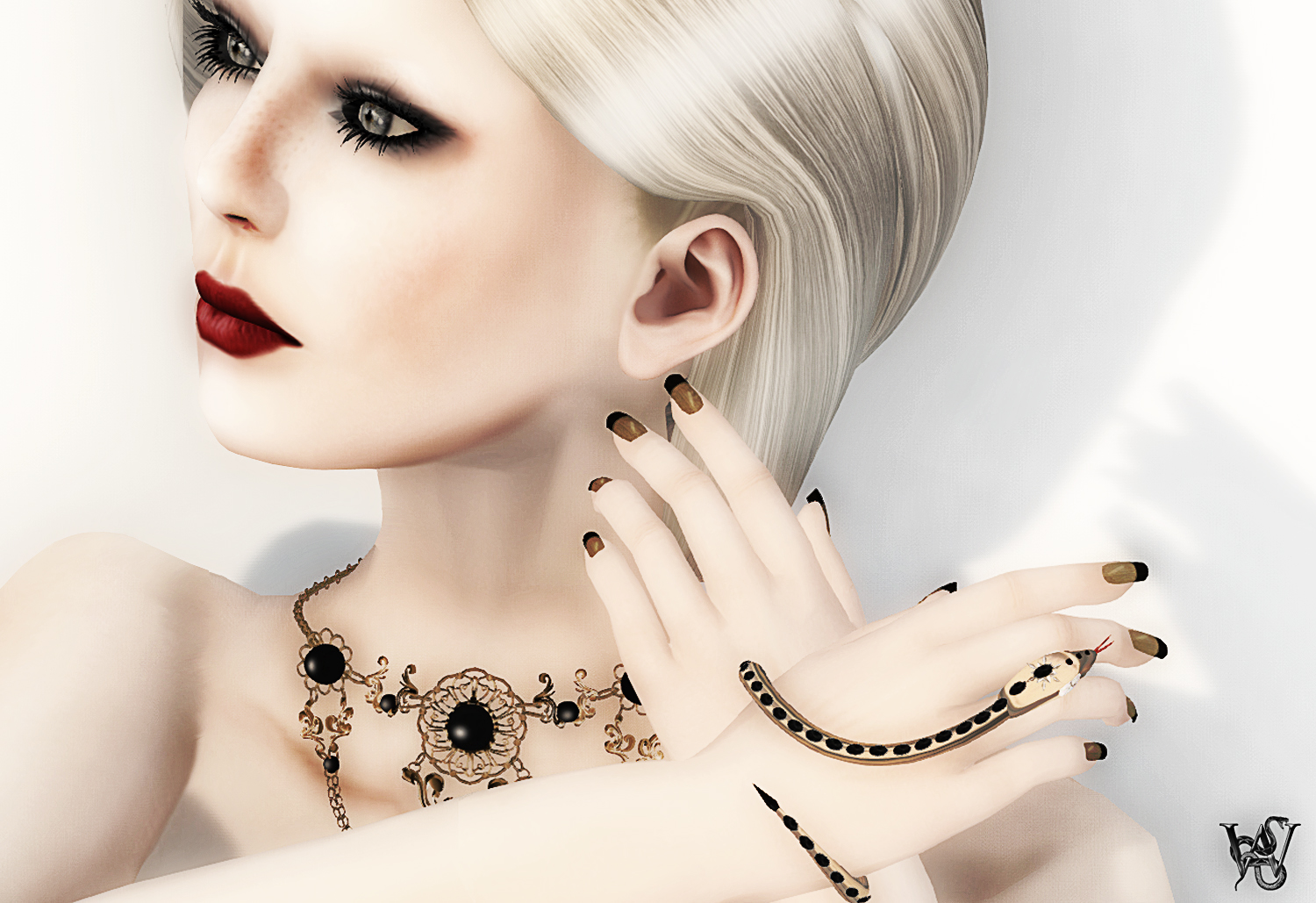 The snake is another amazing creation of Ivi Bing . The snake is wrapped around your right hand and crawls kinda up to your fingers. With the inbuilt menu you can change all the gemstones that decorate the snake body as well as the eyes. For the nails I used no prim nails but one of the amazing polish sets that you can find at Formanails too. The detail and amazing ideas that Formanails even put in their Slink nail polish appliers is just amazing. For this picture I used one of the styles of the Nailart 6 set. 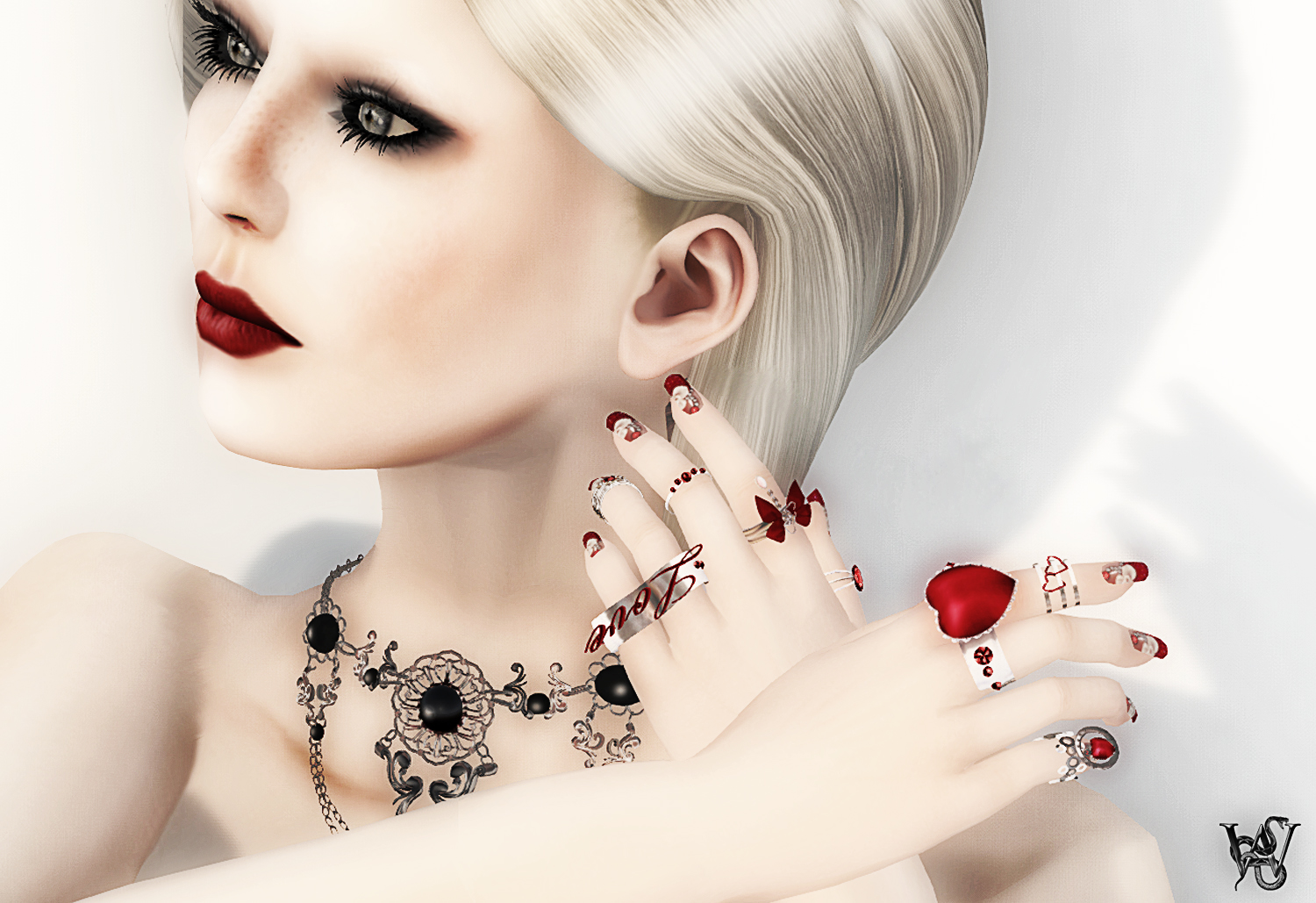 Now we come to one of the more busy hand jewelry. All the rings you can see, are part of the “Love Silver” set. This set is available in gold and silver and with all the amazing little rings and accessories it is just an art piece itself. For the nail polish I decided to go with one of the styles out off the Nailart 3 polish set of Formanails. 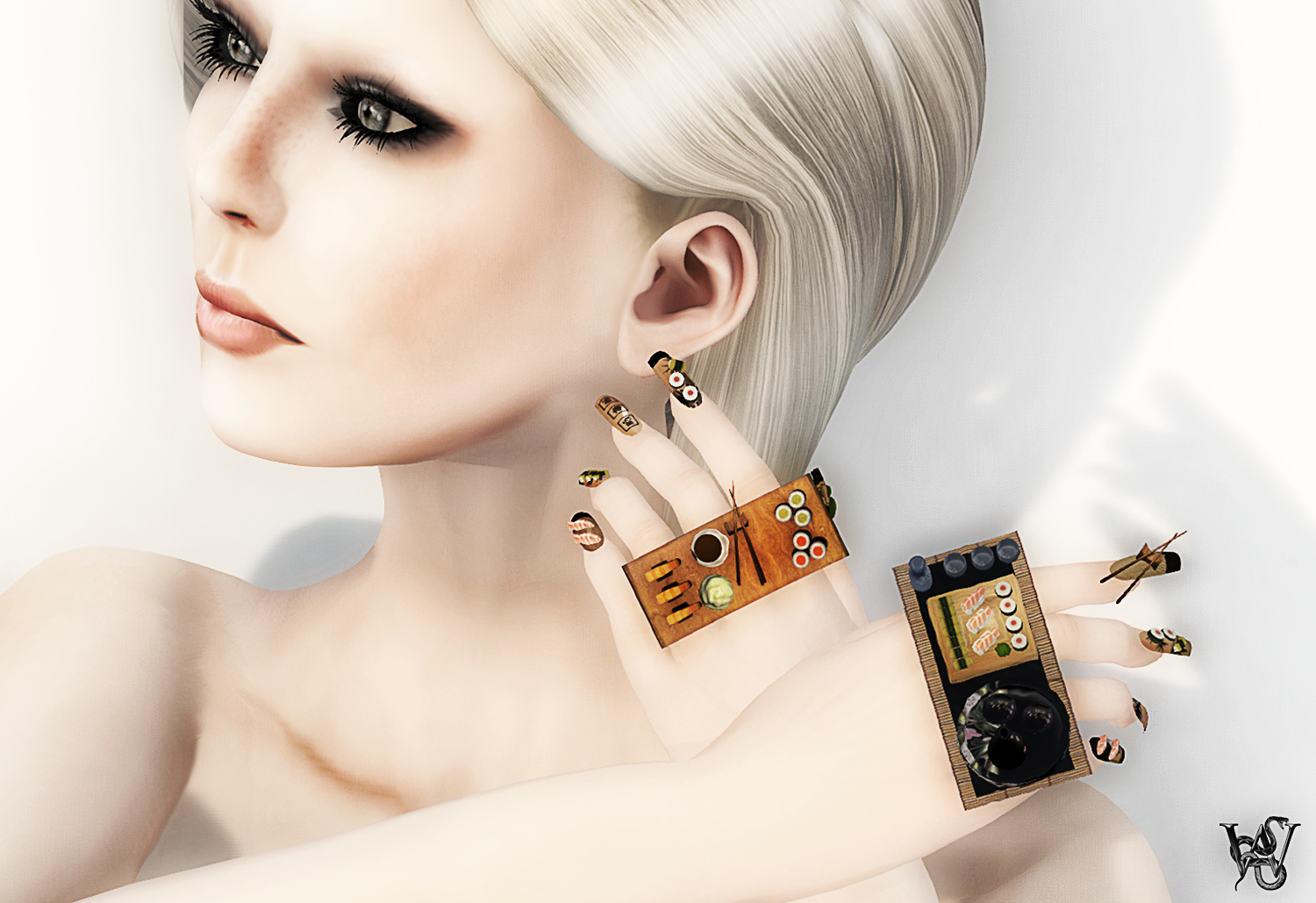 Now, the “Japan” nails and rings are one of my 2 personal favourites … even if I love all and would not wanna miss one of them :p .

When I looked on those sets the first time I just thought I cannot believe my eyes. This super awesome and mega detailed nails and rings are really caught my heart. Just imagine how long it takes to bring a whole sushi with all its parts on nails… simply stunning. If you ever looked for something unique and extraordinary for your nails, the Japan nails and rings sets would be the catch! Every nail is decorated and inspired by a certain kind of sushi and the rings just are the matching table to them… really for me a master piece of nail art from a genius and innovative designer! 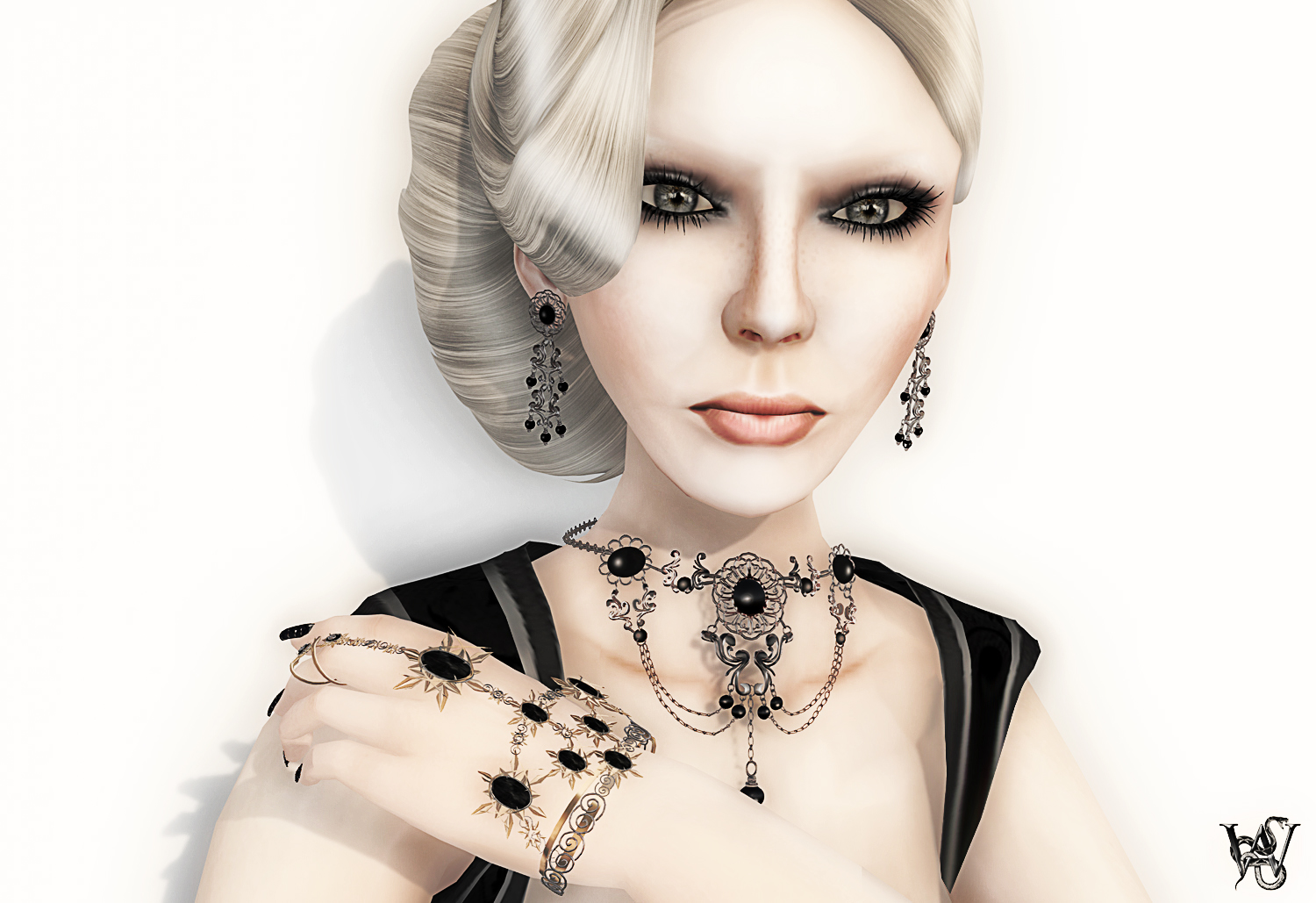 The “Orient” set is something I would immediately wear in RL. I have something that looks very close in RL made by the Navajo indians. I love the way how the jewelry parts cover the hand and are just held by a ring that goes over the middle finger. I have no clue what else I could say about those amazing new and innovative art pieces that make your Slink mesh hands to something special. Thank you Ivi for making it possible to wear interesting nails and rings for the Slink hands!

There is way more new releases since Ivi really is busy designing new stuff and I guess in the moment I finish my post she will have again stunning new ones 😉 If you wanna make sure you do not miss any new release better watch out and hop over to the Formanails Mainstore.