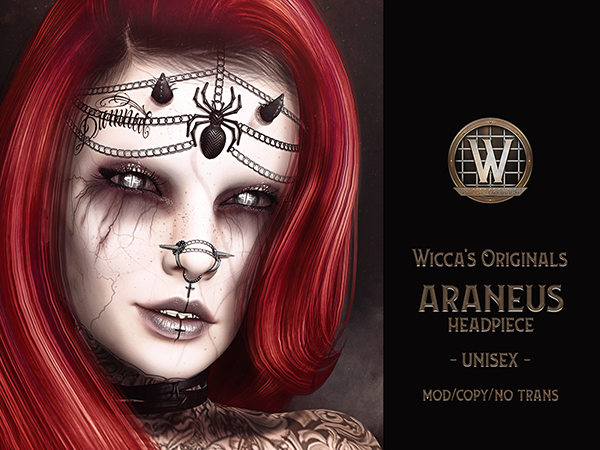 The search continues for the Araneus, the symbol of Queen’s power among her people, stolen from the Great Chamber days before her Coronation.

Wicca paces the Throne Room, awaiting news of the remaining stolen pieces. The necklace – the Heart of People – was returned by two of her Royal Guards before it reached an enemy’s hands. Yet there were only two days remaining until her Coronation and without all three pieces of the Araneus, Wicca’s Kingdom would fall.

Soon, another team of guards return with a second thief, bound in irons and presented Wicca with a folded piece of rough cloth. She peeled back the layers until she reached the center. A sob of joy escaped her throat as tears ran down her cheeks. Inside was the headpiece – the Circle of Knowledge – imbuing her with the experiences of the generations rules that came before her.

Her joy was short lived as she looked down upon the shackled man kneeling on the floor, a small bag of moldy bread, withered vegetables and dried meat open at his side. The thief hung his head in shame as the guards explained how the man traded the Araneus crown for meager food stuffs.

The thief begged for mercy; not for himself, but for his wife and children, who even now were sick and starving in the burned out ruins of their cottage.

Moved by the thief’s impassioned plea, Wicca ordered the guards to escort the man’s family to the Palace where they could be cared for. while the thief, as penance for his crime, would work in the Palace until his debt was paid.

While the thief thankful Wicca for her benevolence, a great weight remained on her shoulders. One piece of the Araneus was still missing.

Sizes: unisex – mod/copy/no trans
HUD: 10 Colors/Metals
(horizontal chains between the first to rows of chains can be hidden via a button on the HUD)
Free Halloween Gift available 😉 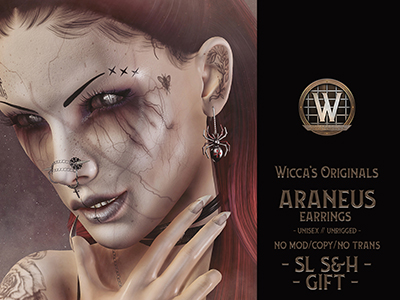 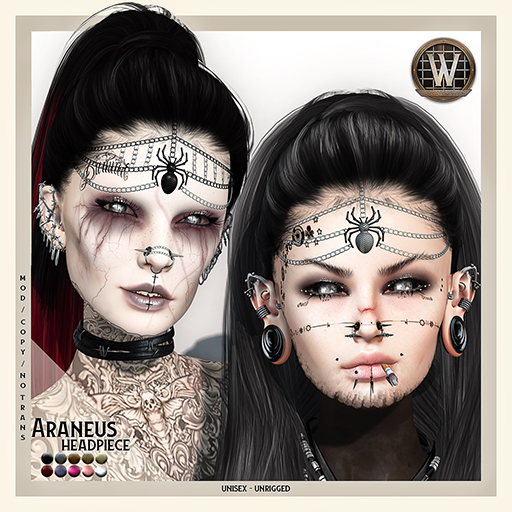