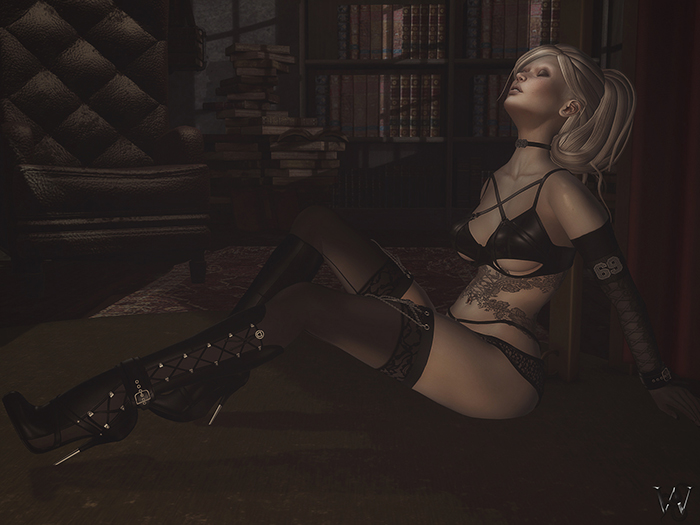 But did you ever read about it in the newspaper when someone covered her/his partners eyes with a satin cloth or pinned his/her arm to the bed with her hands while kissing his/her body? Certainly not, as that doesn’t have the publicity impact of the first scenario I named above.

Activities and relationships within a BDSM context are often characterized by the participants taking on complementary, but unequal roles; thus, the idea of informed consent of both the partners is essential. The terms “submissive” and “dominant” are often used to distinguish these roles: the dominant partner (“dom”) takes psychological control over the submissive (“sub”). The terms “top” and “bottom” are also used: the top is the instigator of an action while the bottom is the receiver of the action. The two sets of terms are subtly different: for example, someone may choose to act as bottom to another person, for example, by being whipped, purely recreationally, without any implication of being psychologically dominated by them, or a submissive may be ordered to massage their dominant partner. Despite the bottom performing the action and the top receiving they have not necessarily switched roles. 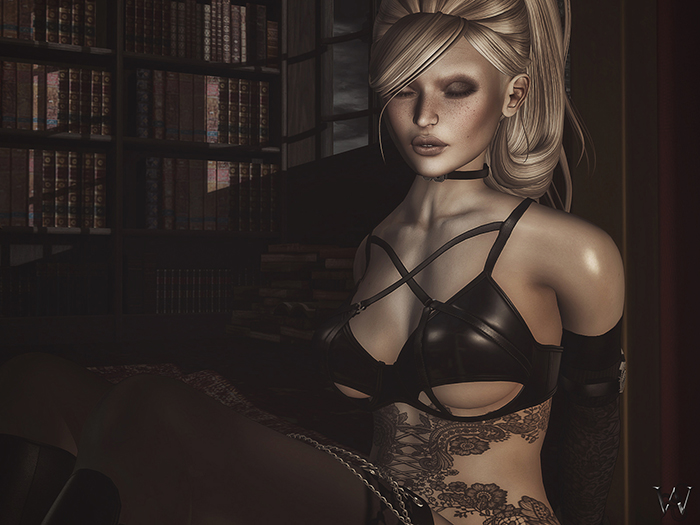 If you read the Wikipedia excerpt, you will think that sounds like everything and nothing, but that is exactly what it is! It can be everything and it can be just a tiny little thing and it doesn’t always involve pain or any “pervert” action. BDSM has so many different shades and fields that you would have a hard time to name them all and the same it is for Fetish… if you look at Wikipedia what it has to say about fetish… you even have to decide first in what way you wanna look at it as you get the choices Anthropological, Sexual, Arts and Business. If you google for the definition of Fetish you will find something like:  If someone has a fetish, they have an unusually strong liking or need for a particular object or activity.” or “If you say that someone has a fetish for doing something, you disapprove of the fact that they do it very often or enjoy it very much.” [Collins Dictionary]

According to that, Fetish doesn’t even have to be a sexual thing only! I have a friend, that cannot leave her home with having 2 different colored socks on. She is not menatlly ill or sick – that’s her fetish if you want to see it like that. Another of my friends has to have jeans from a certain brand since he is 20, he would never ever wear different jeans – that’s his fetish.

Certainly we use the word fetish in a sexual way as well, but what is wrong about wearing a blindfold in bed here and there and get seduced by someone? What is wrong by restricting movements a little bit, to get more intense feelings as long as both agree on it? 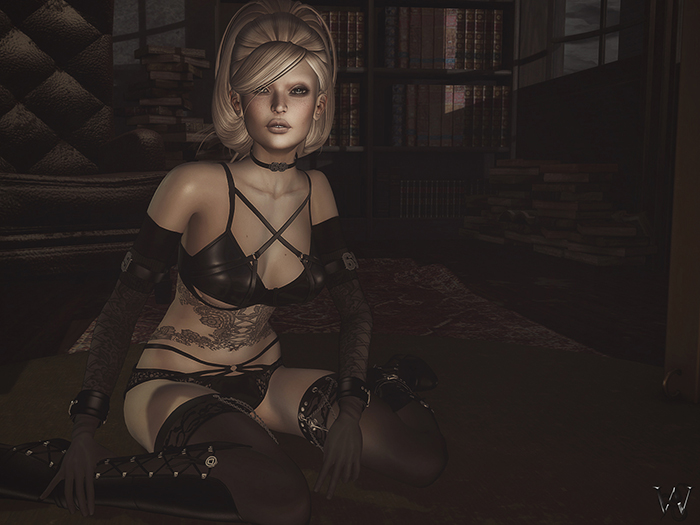 I do think it is great, if you can have a nibble of “forbidden” fruit and have some dreams or desires come true. Some of them may feel better as dreams, but you will never know if you did not try.My first fetish experience was, when one of my ex-boyfriends (I was 16, he was 18) tied my hands to the top of the bed with a satin scarf and caressed me slow and gently. It wasn’t harsh, it wasn’t painful, we did not even have sex in that moment – it just was a complete new experience for me. From that moment on I wanted to know more about it – fun part of that story… my ex-partner didn’t 😉

I am a strong woman, I worked/work in a men dominated world called music business, teach at a school and still I had the desire of D/s relationship for a long time – even before I really did look more into BDSM and Fetish, I loved the idea of a gentleman that opens the door, decides the menu when we go out for dinner and basically carries his girl “on his arms” (in German that is kinda a quote for if a girl is precious for his man). D/s doesn’t mean that the Top just shouts orders and the sub runs accomplishing that… I was told that is called “Army” *snickers*

Maybe I can say, in a D/s relation ship, to me it feels like the sub is a precious gift for the Top, that he handles with care, love and all his abilities, so that it doesn’t get hurt, damaged or broken physical or psychological.

Even the belletristic and the movie world started to change the view about BDSM and Fetish. While in the 70s/80s ‘The Story of O’ and ‘Venus in Fur’ were two of the most popular examples, in the 90s/2000s we have ‘Fifty Shades of Grey’, ‘Secretary’, ‘Crossfire’ or the ’80 Days’ series, which give a complete different view about the topic, even make it more presentable to the public. Maybe that helps to drag this kind of stories, movies, dreams and desires out of the dark corners, out of the dirty backyards and shadows that the past pushed them into. Maybe the world is more ready nowadays to allow those things to happen or at least accept, that they are happening without pointing a finger and calling it bad things only.

I would love to hear your opinion about it – if you can or want to share yours, I will be happy if you put it in the comments 😉 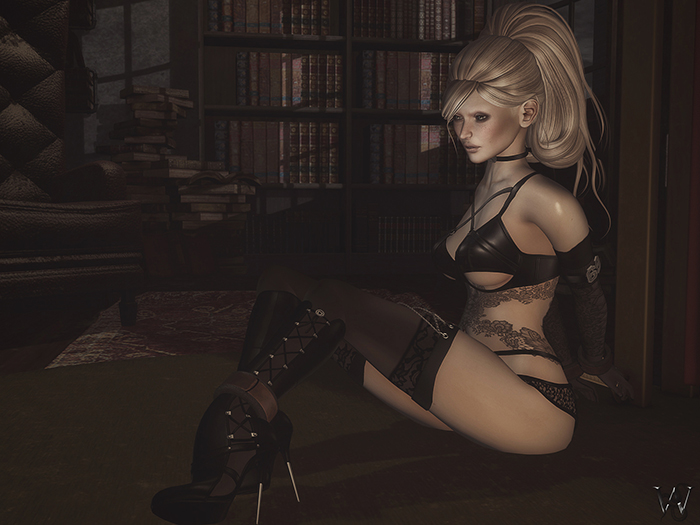 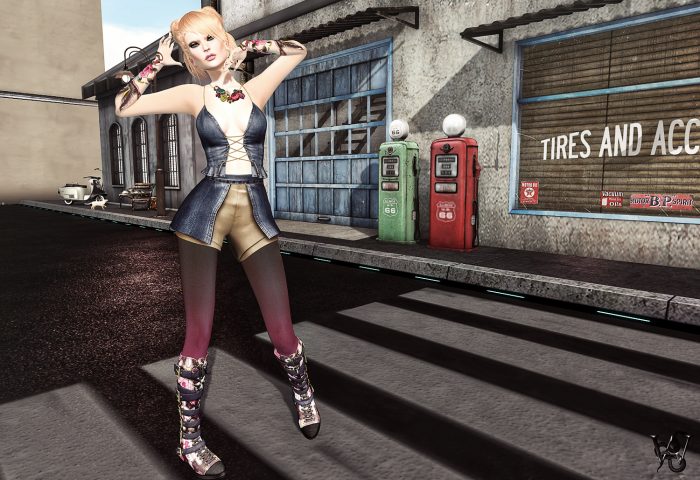 I come home, in the morning light
My mother says “When you gonna live your life right?”
Oh momma dear, we’re not the fortunate ones
And girls, they wanna have fun
Oh girls just wanna have fun… 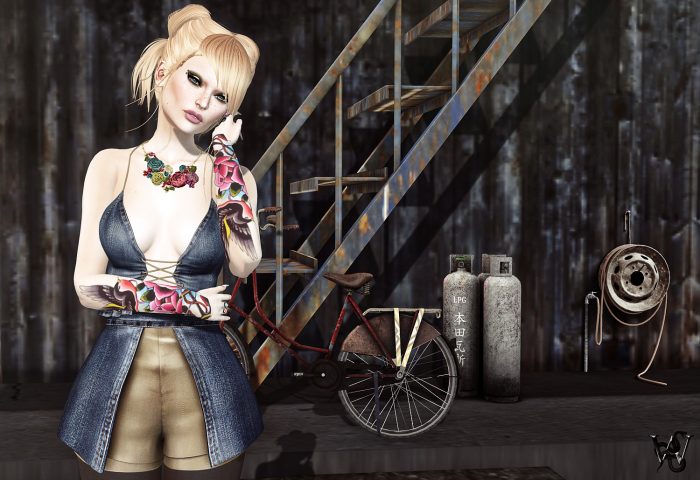 When I put on the “Callie” outfit from Gizza I did instantly know, that I want to do a fun picture with it. In Germany we have a warm weather come back these days with lots of sun. Temperature climbed up as well and so I was in a sunny late summer mood when I styled my look.

I am not a girly style person usually, but today I just got me and I added some more pink and color to the “Callie” ensemble. The amazing “Kam” eye shadow from Slackgirl encouraged me even more for that 😉

For the nails I certainly had to go over the top as well and used the fantastic “Signal Stiletto” bento nails for Maitreya, as well made by Slackgirl. Teal and pink – normally I only use that combination for cyber looks with lots of black *giggles*

The amazing bento rings with the huge gems are made by MEVA and I am totally in love with them. For modern statement jewelry the “Victorian Bento Rings” are just perfect with their huge color HUD and you can even hide some of the rings if you like.

Typically for me, if I wear tattoos, I mostly wear black & grey ones, but the “Anchored Love” arm tattoo with its bold colorful design, just matched the look so perfect, I could not resist 😉

Like I said before.. today was only enjoying some free time and so I just went to Anduril for some snaps and enjoyed playing with windlights. Sometimes you have no reason, no special blogging duty and no idea what the outcome will be and just have fun! 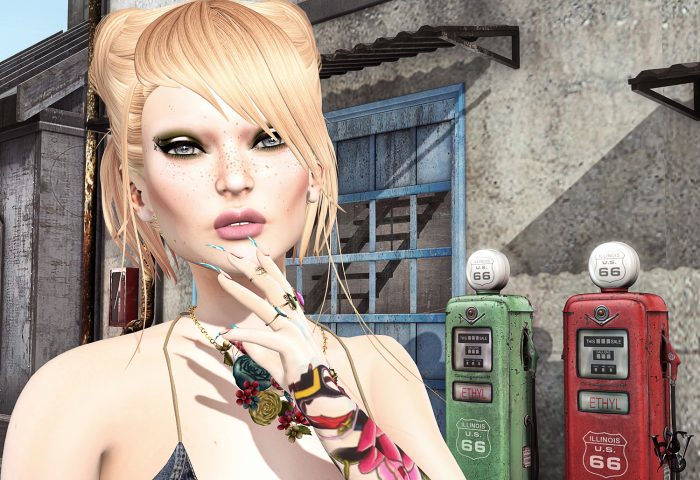 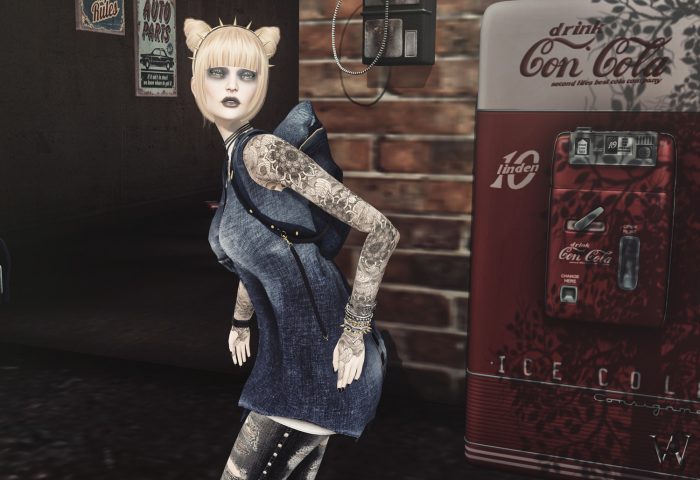 As much fun and joy my RL work is as much I enjoy the silence on the weekends – I am one of the happy people who only work from Monday to Thursday (more than 10 hours a day) t have free on Friday (if I do not have gigs with my band). 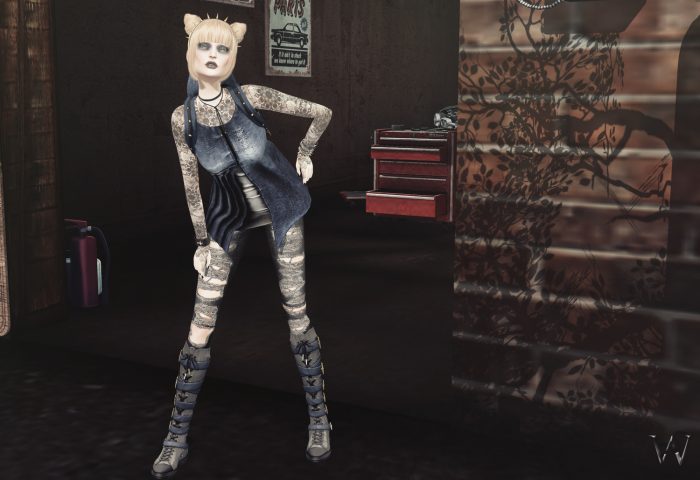 Since I am not a huge fan of bare legs – especially if the weather is not cooperating – I added some ripped jeans under the dress.

The cool sneakers I found at the Shoetopia and when I wanted to go back and get them… it was closed! Thank god I had not to wait too long until I found them in the KC main store.

When I was looking for a location, I wanted something casual, but as much as I tried to find a nice casual city or street, I did not find any… I really miss the old Mayfair sim where they had built a wonderful city with some stores and all those nice corners where you could do cool pics. The whole sim was mainly in white and light tones and not that dark as all the ones I found when I was looking today. Are there none regular and modern/mesh built city sims for just some easy casual posts? Maybe I am just too blonde to find them :p

Anyways, for the pictures I finally went to Woodbury Falls, as I did remember a car mechanics building there which I saw fit for today’s style. 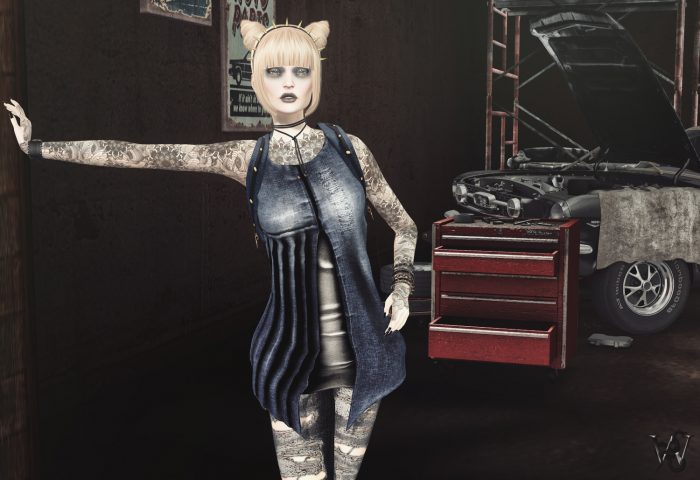 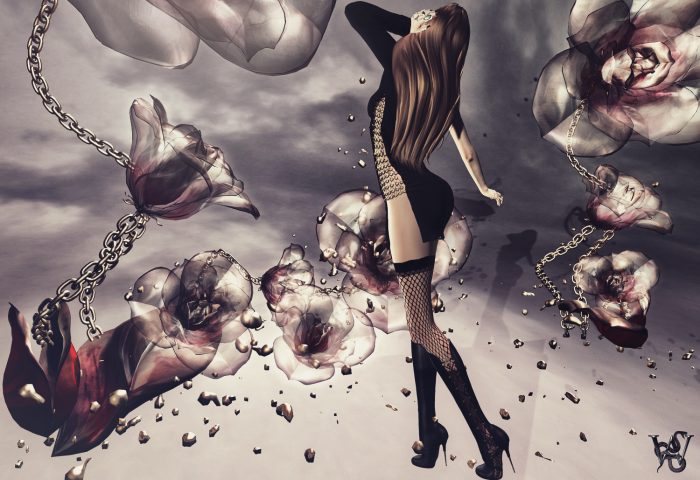 I have no clue how I came on the idea for this pictures… but it was fun :p

I know I saw that roses at Skye’s place when we did a shooting and remembered I got those too. When I saw them again, I so wanted to do something with them and when I unpacked a few boxes I found the perfect dress and all of a sudden everything fell together 😉

But lets start from the beginning…

This time it was not an outfit that started the whole idea, it really was a set I was playing around with. I started with the “DYSTOPIA Chained Roses” from E.V.E Studio. I found so many parts in the folders… different roses with chains, standalone petals and as well several colors… I decided to go with the bronze ones as I loved the red touch paired with either a golden or a black chain. While I was playing around with arranging the roses I came across the “Splashing Droplets” in gold, which just matched the “Chained Roses” perfectly. 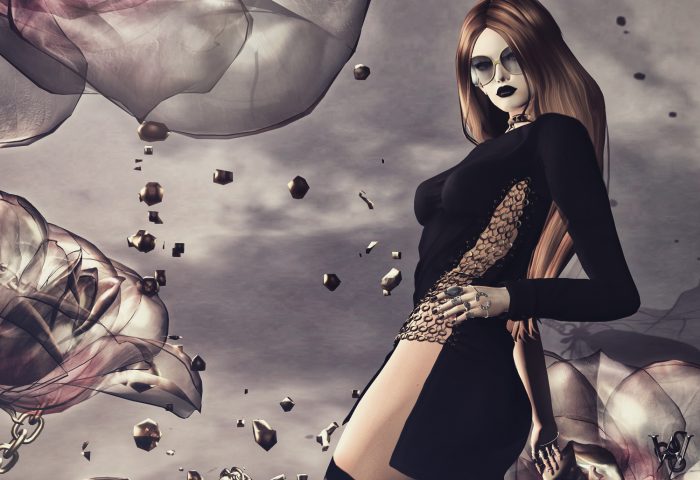 The dress is a very simple one BUT with great asymmetric details. The left arm is covered by a long sleeve while the right arm is totally bare. The left side has a high slit which is decorated with many rows of chains.

Another great detail I would love to focus as well. The amazing rings and hand bands from Formanails. Formanails does the most incredible hand jewelry and nails I ever saw. Most of the designs are made for either Maitreya or Slink Casual or Slink Formal hands.

Overall the whole scenery with the looks and the set looked weird and cool the same time to me so I just had fun to take some pics and see what comes out 😉 It was a new feeling to me, to style according to a set instead of the other way round *giggles*. It was a great experience and as well some kind of a new challenge for me, maybe I should do that more often 😉 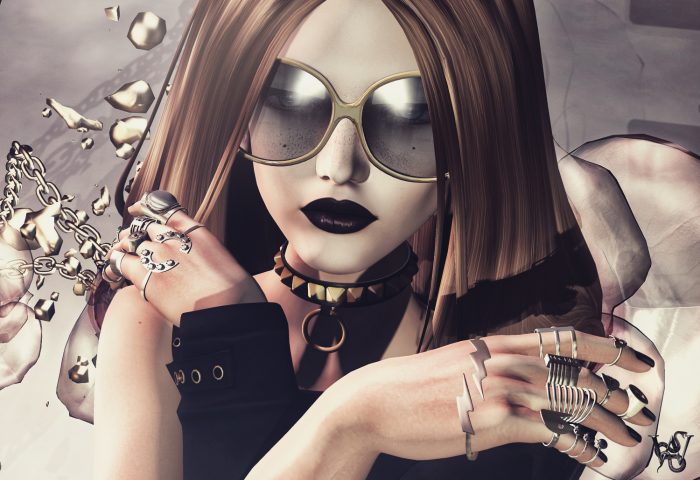