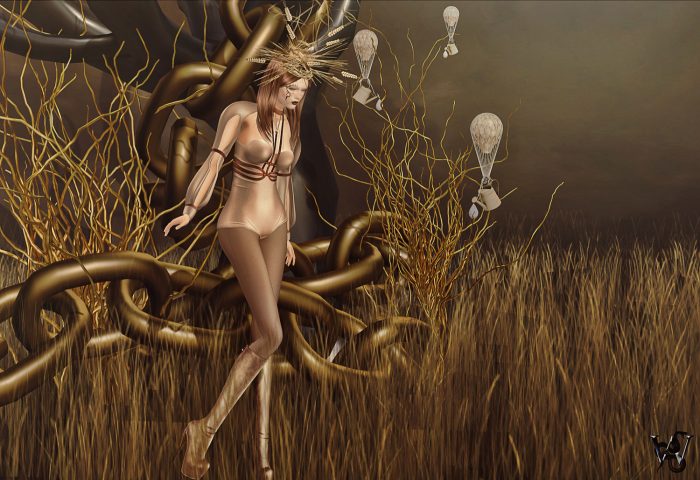 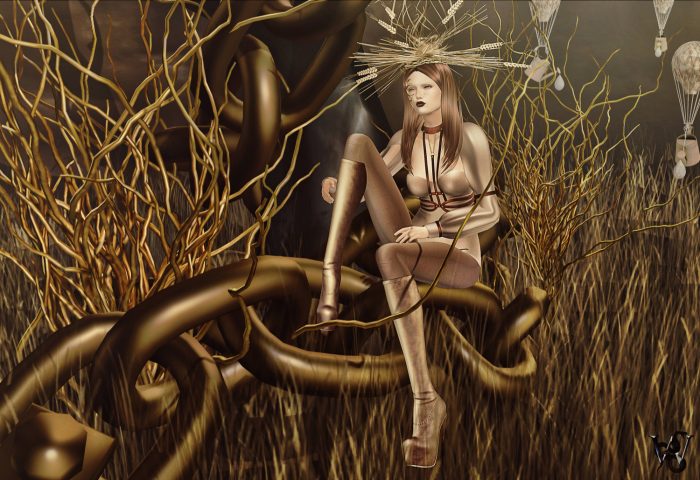 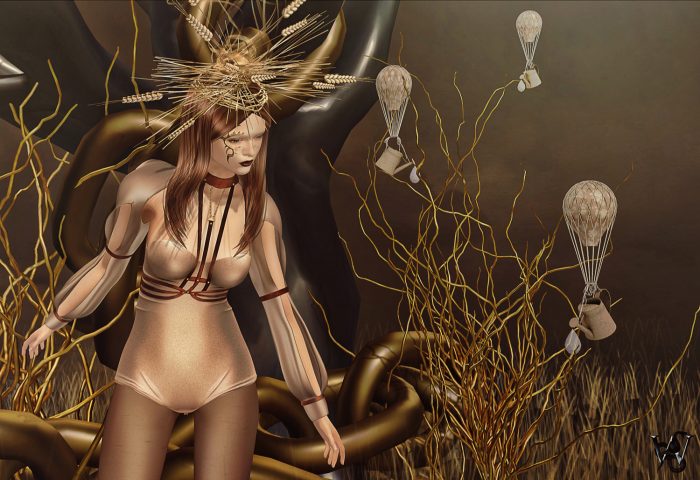 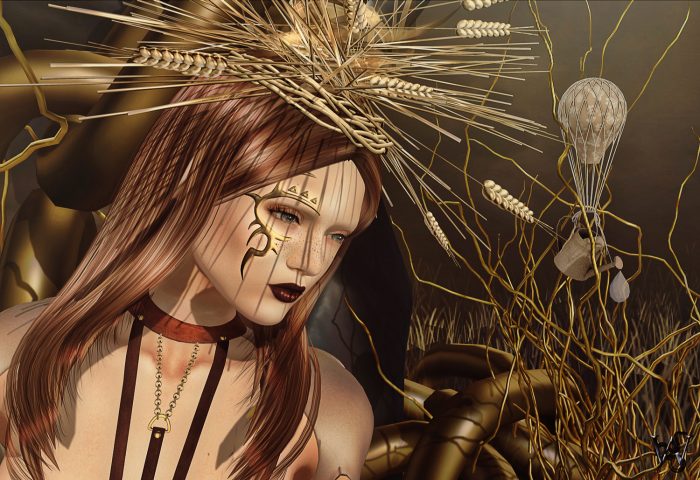 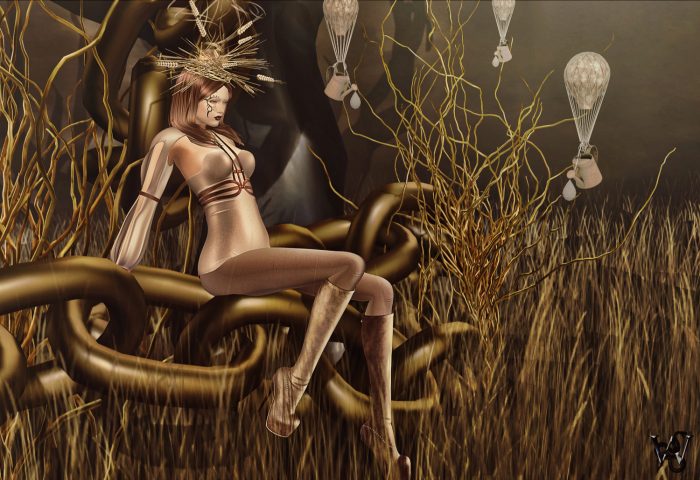 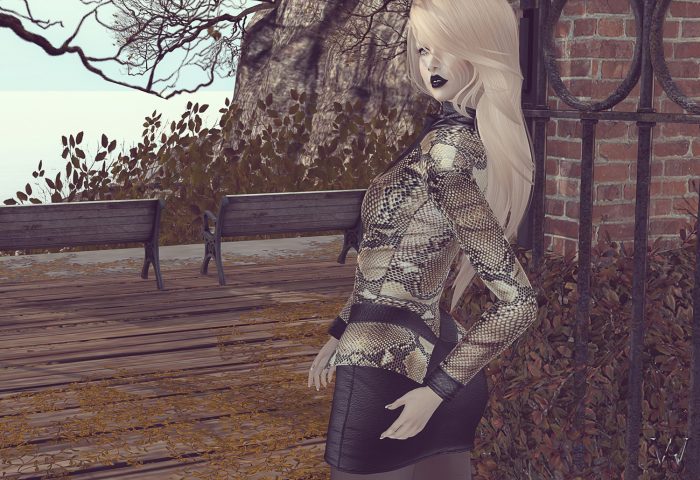 Yesterday when I dressed up for my GizzA shift I found myself in a light elegant mood. That for I tried one of the latest releases from GizzA called “Adrianna”. “Adrianna” is a wonderful ensemble of a jacket with a deep neckline and a wonderful short leather skirt. The outfit is available for standard avatars as well as for Slink Physique/Hourglass and Maitreya Lara mesh bodies.

Since GizzA recently started to make appliers for mesh bodies, I could not resist to use the new “Fleur Lace Top” under the “Adrianna” outfit. I made a wonderful addition to the rest of the look 🙂 The “Fleur Lace Top” comes with four appliers (Slink, Belleza, Maitreya & Omega) so you should be able to wear it with all the popular mesh bodies out there. What really caught my attention, the lines are very sharp and crisp and so you could see all the love for the details, Giz put into that wonderful new release. To complete the outfit I put sheer tights from Izzie’s and the wonderful “MeiMei” set made by Meva for the past round of On9, but I am sure you will find it at her main store now 😉 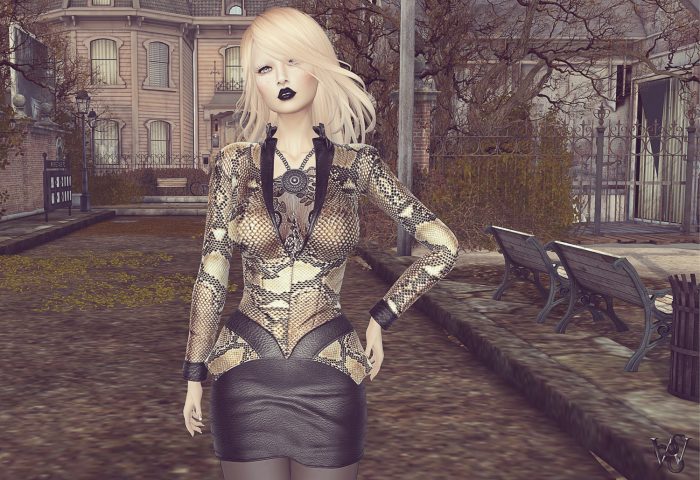 For the pictures I again found my way to one of the Neva sims. This time it was Saint Pete City. A wonderful designed little city with so many details that I still find some every time I go back there 😉 For these picture series, I walked to the more outsides where you can see the seaside from those lovely benches. That would be as well a wonderful place just to relax and chat and enjoy the waves and birds I guess 😉 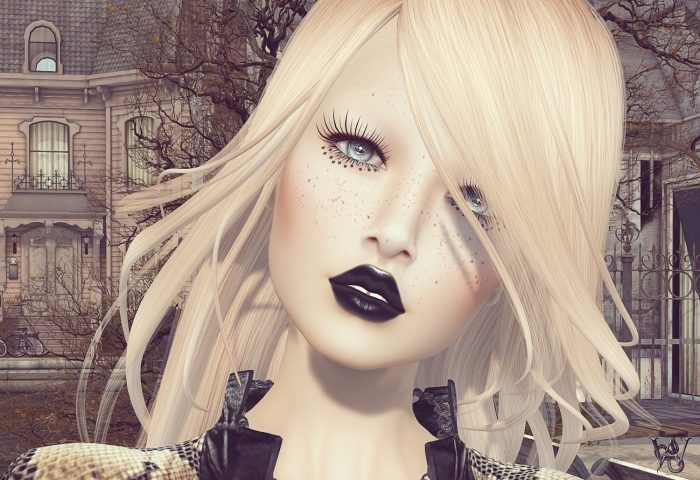 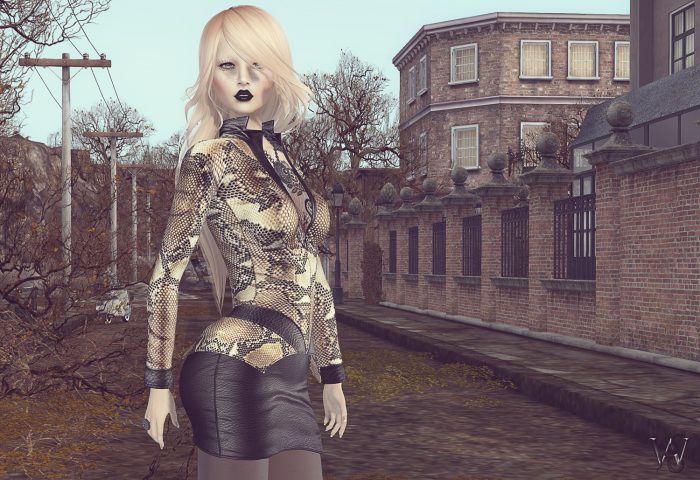 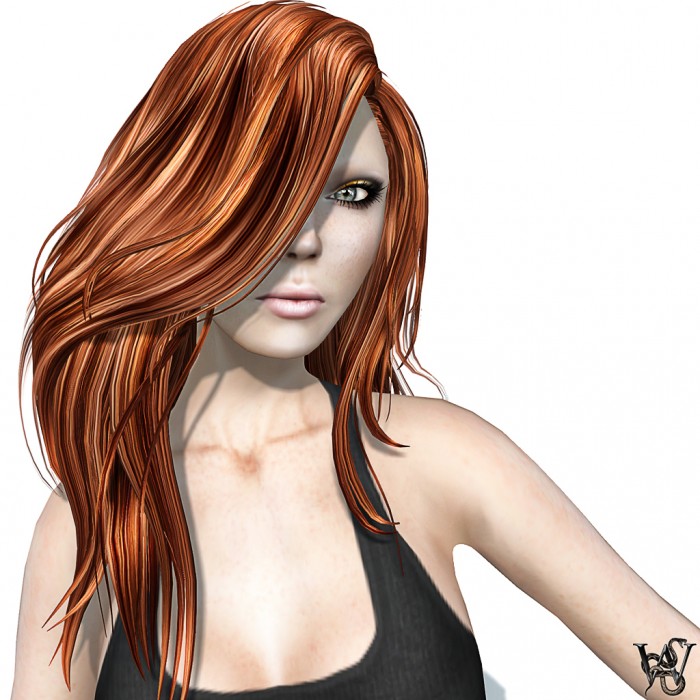 Mirja Mills from EMO-tions was such a busy bee even during the christmas and holiday season, that I really thought I owe her a special hair post 🙂 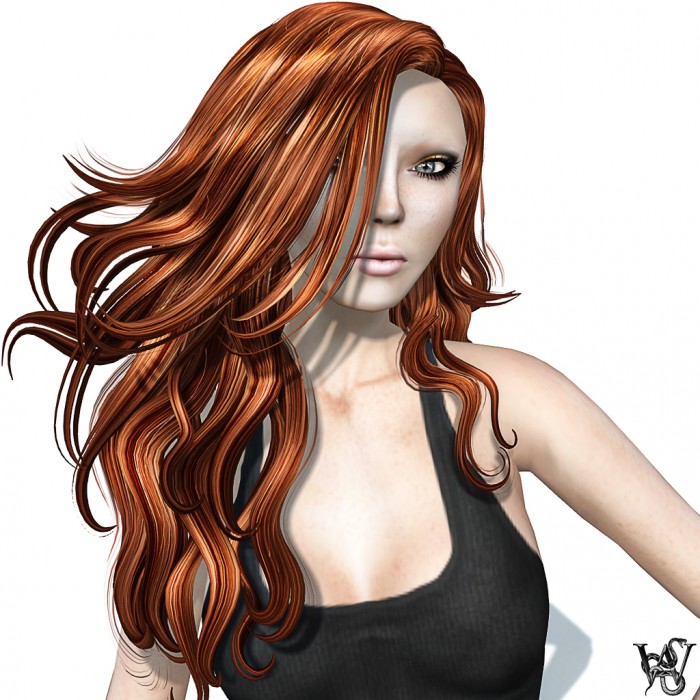 Recently she made some wonderful mesh hair styles, I really fell in love with. The “Nella ” and the “Mona” style totally captured my attention as this is kinda the way I used to have my hair RL and it reminded me of some cool pictures i got from a gig with my band. Both are kinda windblown and not just al good girl sorted. So the perfect choice for an amazing everyday look. 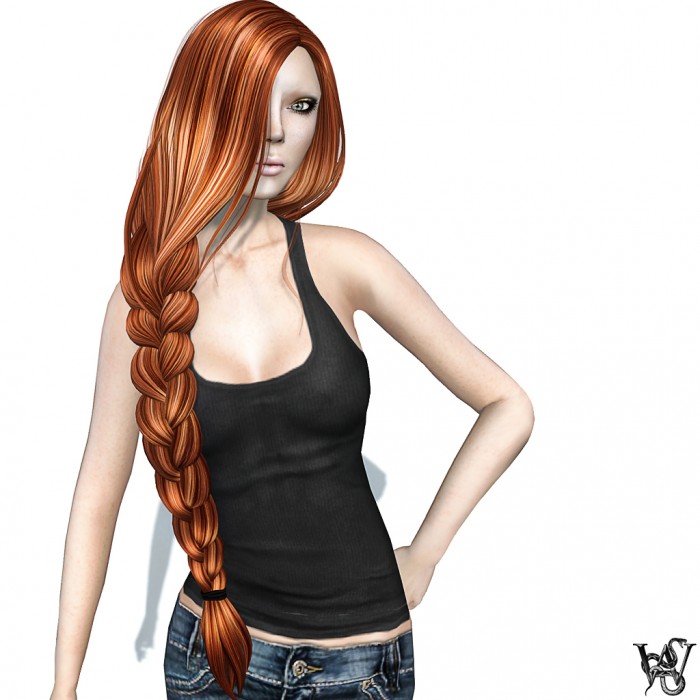 But even the good girls will be satisfied with for example “Michaela”. The amazing long braid, that is coming down over the right shoulder comes in 2 different looks. Once like we see it on the picture with hiding half of the face under a wonderful wisp of hair. The “Michaela 2” as well has some hair needles wich pull exactly that hair to the back. 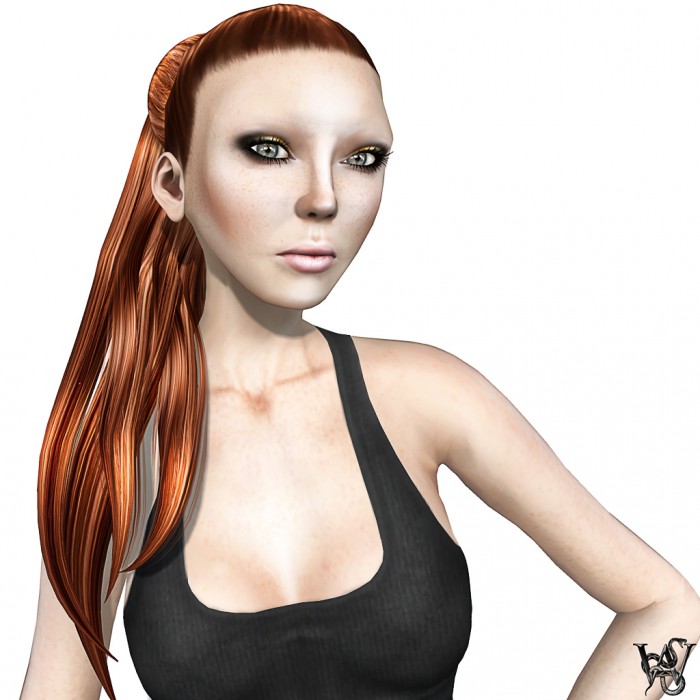 “Laleen” again is a ‘2 in 1’ hair style with the amazing sweet and cute animation, which the avatar does when you change the hairstyle by touch. The “Laleen” hair can be worn as a long ponytail over the right shoulder or when clicked it becomes a sweet casual up-do 🙂 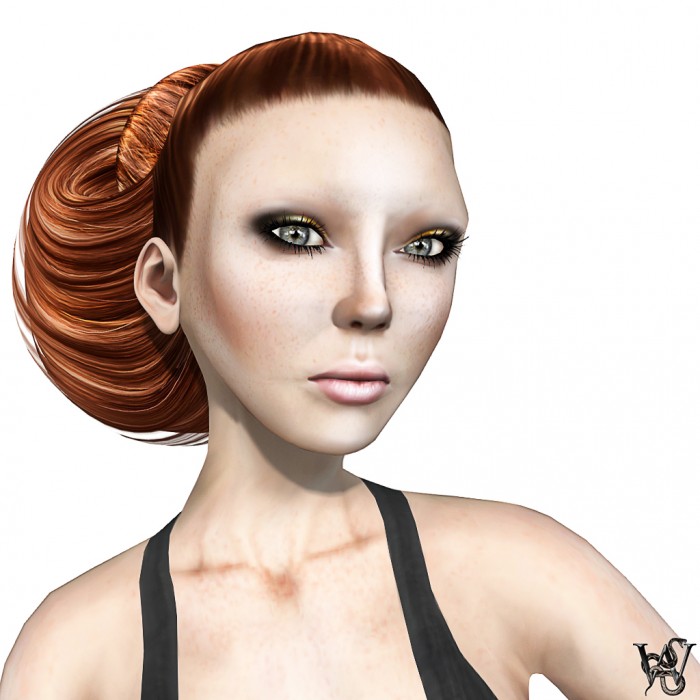 For both versions the knot at the back of the head stays the same. 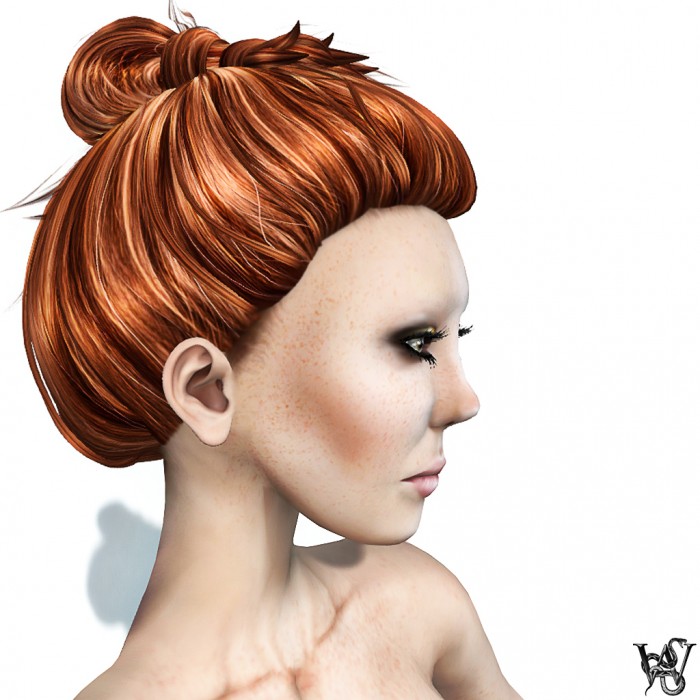 “Jared” originally was made as a male hair style. It as well has an amazing beard in the box but that really looked too awkward for my today’s post ;). But I never saw the reason why certain male hairstyles cannot be worn by females as well 😉 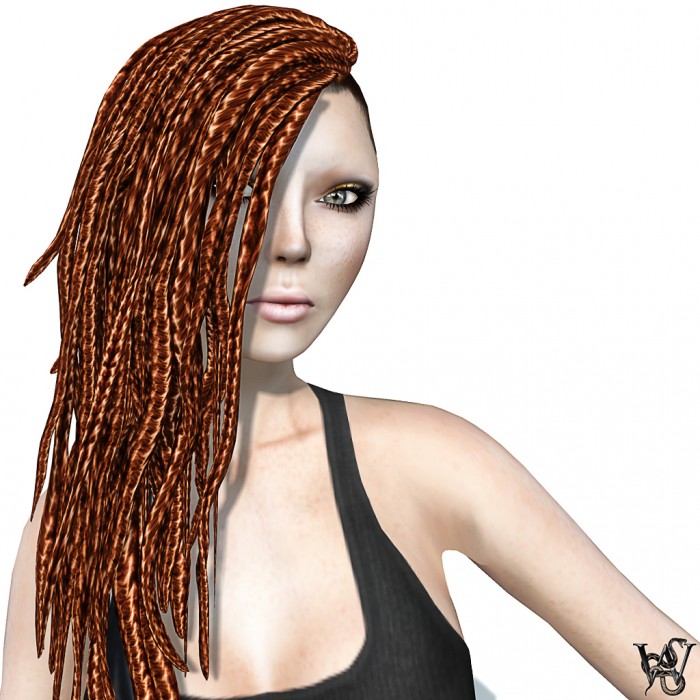 With Lauren my little punk heart was beating a tick louder than usual. Those amazing little braids all pulled over to the right side of the head show a wonderful shaved under-cut on the left side of the head. 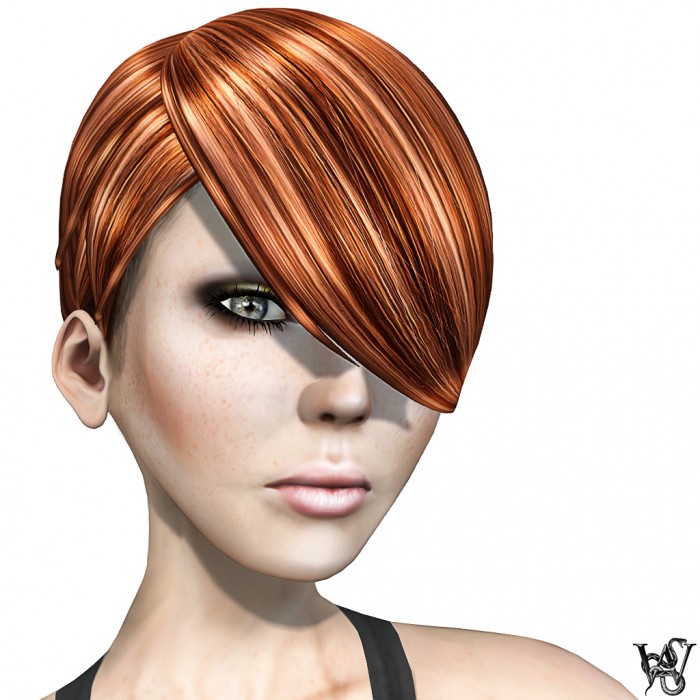 “Alicia” is one of those hair styles I dreamed about in RL ion forever but I never dared to cut my hair again so short, after I had a bad accident with a person that cut my hair while I was a child too short. But “Alicia” totally brings a super modern vibe to me and makes an amazing every day hair style.

Last but not least for today we have “Eles” a more elegant hair style which as well can be used for casual stylings but gives them a more classy look. The playful wisps tha go down at the sides add a very realistic touch.

Even if I posted all of those amazing hair now in only one color, you certainly have the normal color options we know from EMO-tions 🙂

So do not wait and take the next taxi to the EMO-tions main store!

END_OF_DOCUMENT_TOKEN_TO_BE_REPLACED

Again it was the music that inspired me for a styling. Within Temptation is a band that I used to listen to a lot in the past. As I was sorting all my CD’s the last days I found the album again where the song “Mother Earth” was from and just listed to it running in circles :p

The gown is one of the Ashraya Project contributions of Azul. “Tyra” in a special color only for this event made a great basic for the look that was stuck in my mind. The gown has a lot of sheer parts that still cover up all what it has to 😉 The jewelry is as well an Ashraya contribution by Finesmith. “Krinin’s Poem” comes with headpiece, necklace and ring. The gemstones are color changable 🙂

For the face tattoo I used the “Wild Flowers” from White Widow, as well available at the Ashraya Project sim. The hair I found at a huge hair store called Discord Designs. I loved it so much as it is made with the new mesh technique that goes with the avatar so well. The color was matching so well that imagination of all that earth tones that I just loved it 🙂 I hope you had fun listening the tunes and maybe can feel what I was going for 😉