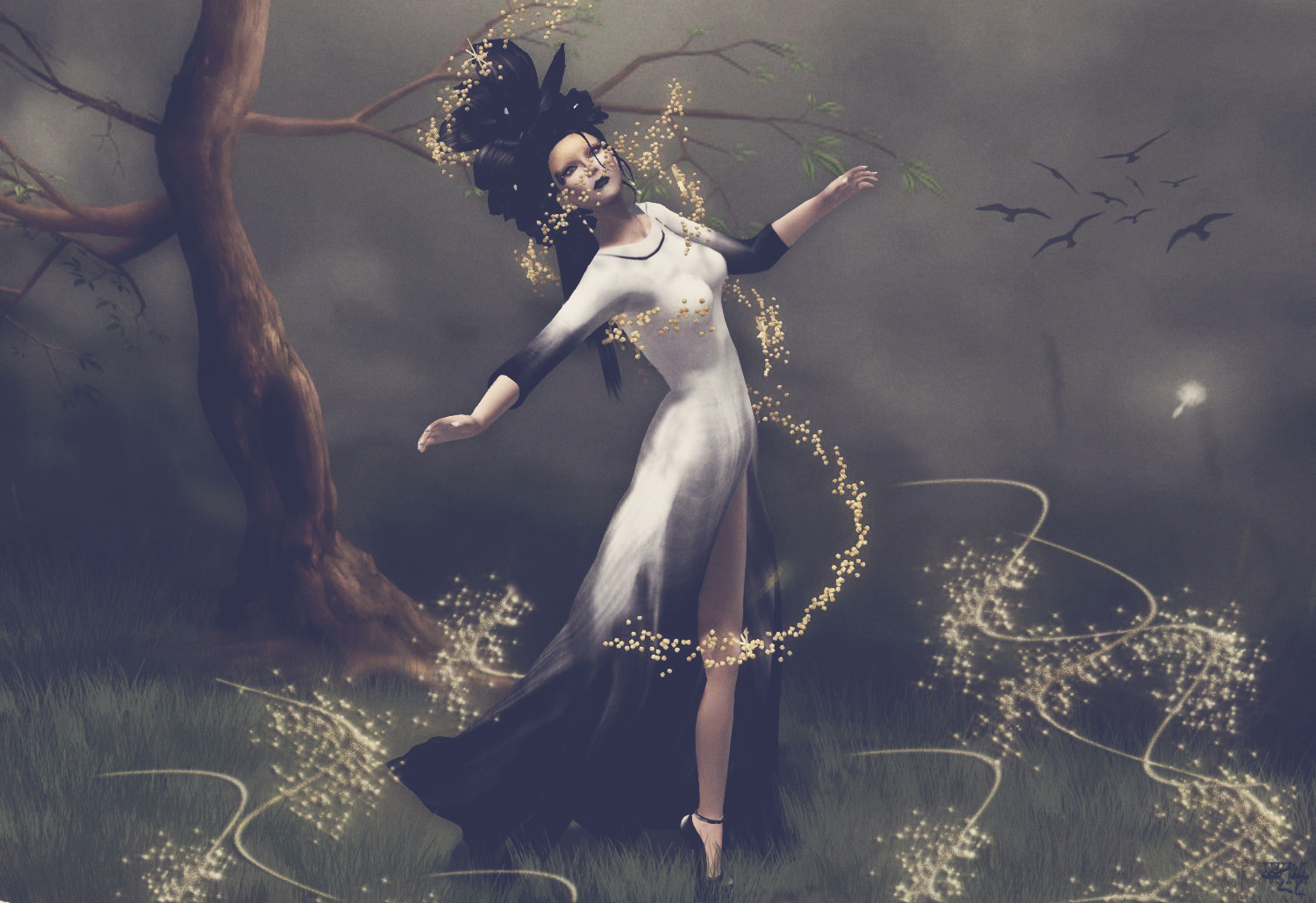 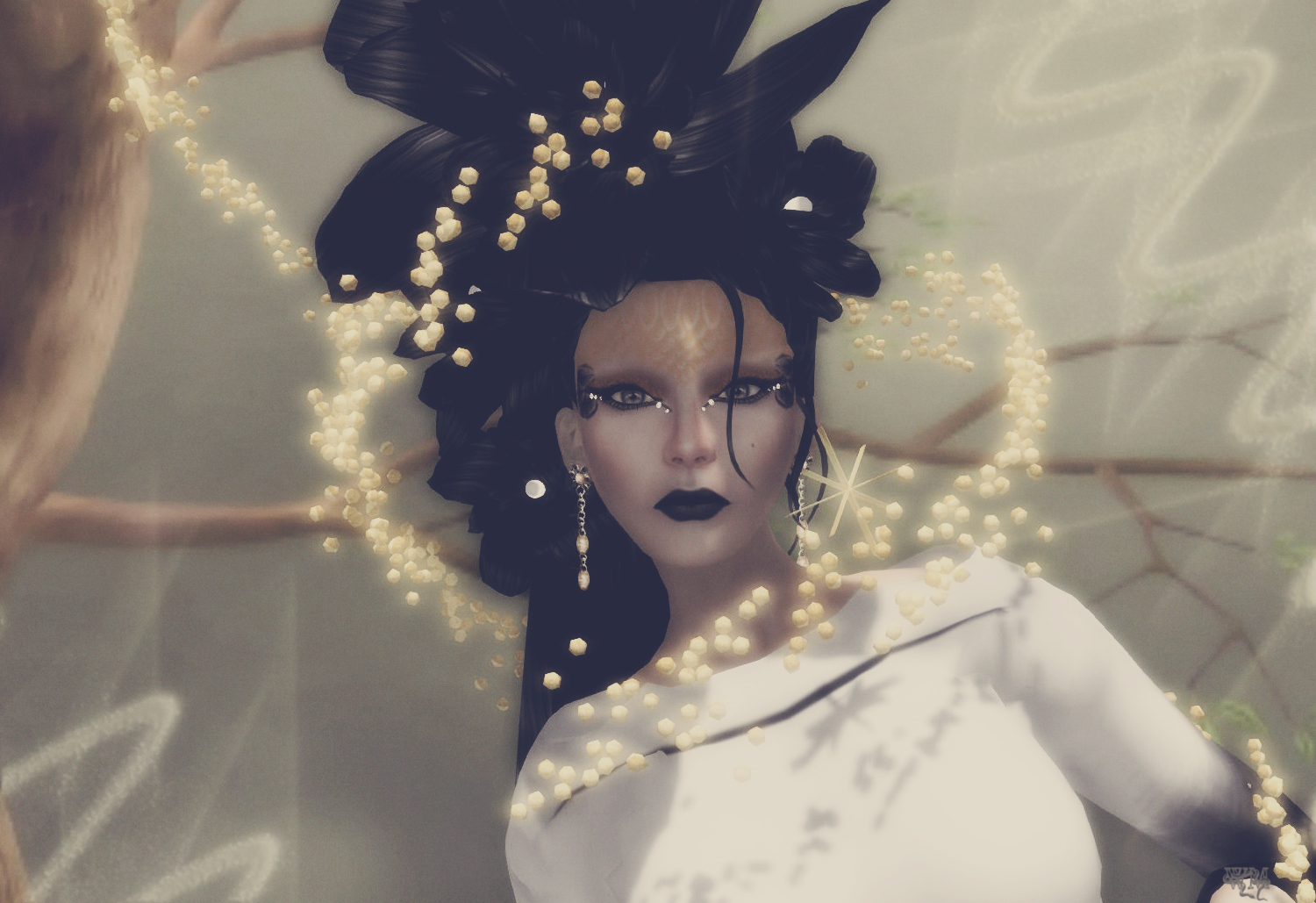 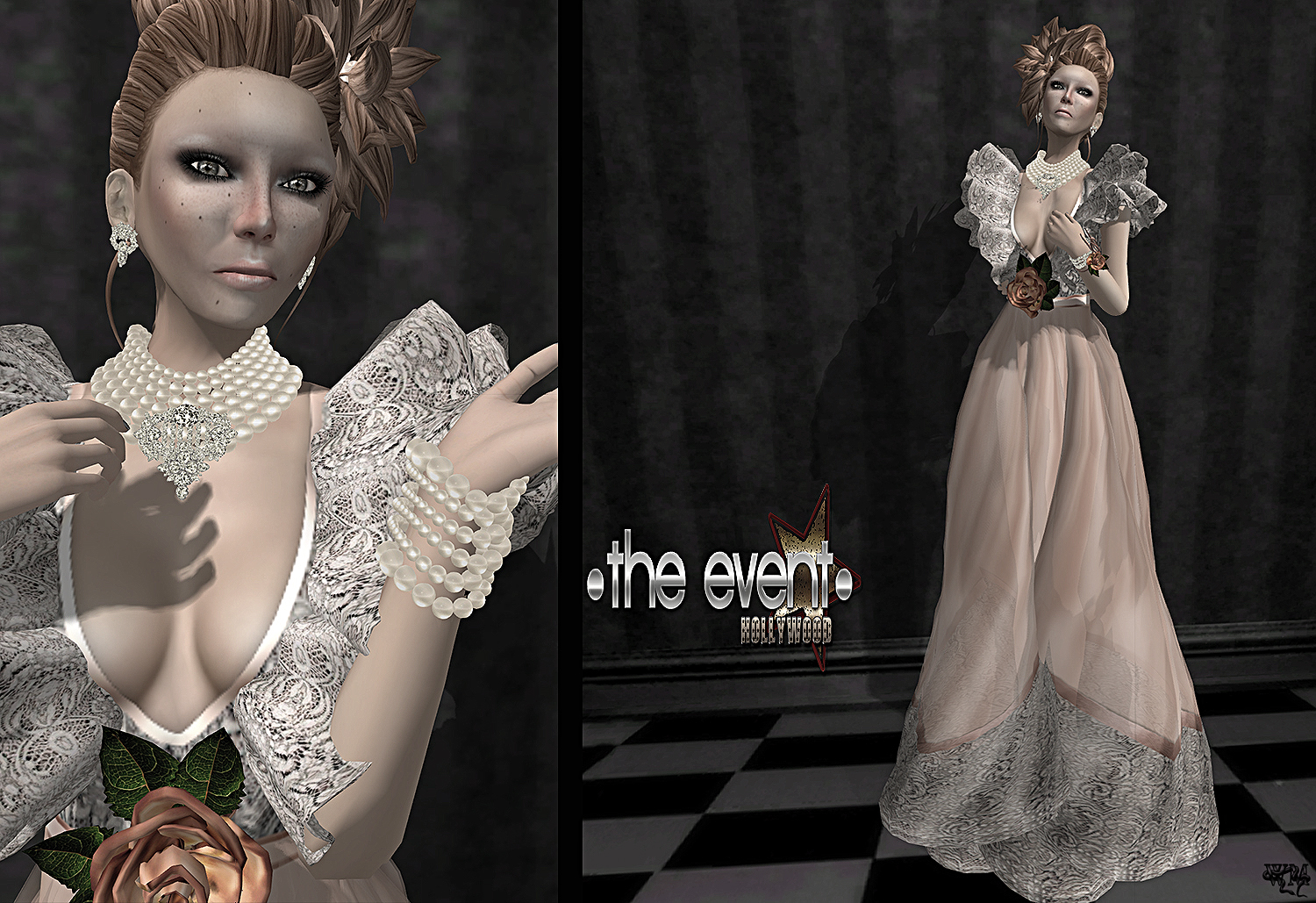 Today I have the pleasure to show you 2 of the latest releases of Son!a. Sonia28 Jie, owner and fabulous designer of Son!a, again released some masterpieces of clothing :). The first one, I would like to show you, is called “Virgo”. A wonderful ensemble of a corset, a sheer half skirt and some wonderful arm parts. The textures again show why, Sonia28 Jie is one of the most popular designers if it comes to precious and elegant gowns and outfits. The corset is textured with such a love to the detail that you can see every fold, light and shadow, what makes it so realistic that you think you can just touch it and feel it under your fingers. A sweet detail as well are the ruffles that decorate the chest.

The second outfit I wanna showcase for today is called “Jamie” and it is a very modern looking dress.. kinda cocktail dress looking. What “Jamie” and “Virgo” have together is the wonderful corset, what is center for each outfit, even if they are totally different 🙂 The corset of the “Jamie” dress is made with that new mesh technique and it comes with an alpha layer and in different sizes so you can make sure it fits nearly every shape.

Besides that wonderful mesh corset you have 2 skirt options to wear one sheer and one opaque. What as well makes an eye catcher are the wonderful roses that decorate the left shoulder. For this second look I took the new “Optical” collar, bangles and nails from blackliquid to complete my look. This simple set of circles is exactly what every fashionista searched for always and never had :). The “Optical” set with the matching fingernails you will fine in many more amazing colors at the blackliquid Mainstore.

To see more of the amazing new and latest releases of Son!a you better take a look for yourself at the Son!a Mainstore 🙂

Today I have the great pleasure to show you the wonderful national costume of Miss Greece 2012. The amazing “Medusa” outfit was made by AnaLee Balut, skilled and experienced owner of ALB Dream Fashion. AnaLee Balut is a well known designer for contest gowns as she made MVW 2009 winner´s evening gown,  MVW 2010 winner´s costume and she was one of the finalists in the “One in a million” designers contest. With the “Medusa” outfit she captured many little details of the Greece mythologies. What caught my attention the most are the wonderful 3D looking snakes that go through the whole dress. The all look so real but not one snake looks like the other. The huge headpiece as well is part of the outfit and for the clothing layers AnaLee Balut shows her skills when it comes to designing. She combined different fabrics in different colors in an awesome way to one piece. The headpiece as well combines a lot of amazing little details. The golden part with the huge red gem, the long tail parts that again catch the snake theme and the hair itself. A stunning creation for Miss Calypso Oliphaunt, the Miss Greece for Miss Virtual World 2012. The beautiful shoes are as well part of the outfit. Very filigree done, again we can see how much love for the detail AnaLee Balut puts in her designs. The shoes come with a HUD so you can match the perfectly to your skin tone. The “Medusa” gown you now can purchase at the ALB Dream Fashion Mainstore.

The jewelry for this incredible creation was made by Alienbear. Alienbear made the perfect addition in gold and red for this wonderful dress. The thin golden lines in amazing shaped and ornaments holding tiny little red gems and white diamonds… really the work of a professional and Alienbear again shows why she is one of the top jewelry designers in SL with this wonderful and gorgeous “Esmeralda” set. The set contains the earrings and a two-part necklace. I am sure you will find the stunning “Esmeralda” set at the Alienbear Mainstore together with all the other breathtaking creations of Alienbear Gupte.

Yesterday Mami Jewell, owner and brilliant designer of Azul, released 2 more Miss Virtual World 2012 gowns. I am very happy that I am allowed to showcase the stunning MVW 2012 Evening gown of Miss Greece 2012 – Miss Calypso Oliphaunt. This beautiful and aerial gown is another piece of art out of the hand of Mami Jewell.

For Miss Greece 2012, Mami Jewell decided to go with the traditional colors blue and white for the evening gown. The front has a very deep neckline and the aerial fabric caresses your upper body with every step you take.

The back view as well is very attractive. The deep back neckline gives a very sexy touch as well to all the elegance 🙂 The “Calypso” gown you can find at the Azul Mainstore as well in a few more colors 🙂

The wonderful jewelry was made by Alienbear Gupte, genius designer of Alienbear. Alienbear always stood for high-class and very elegant jewelry. Since I started modeling, Alienbear always was on the top for jewelry design. That she still is there shows the amazing “Calypso” formal set, that she made for Miss Greece 2012.

Alienbear used the deep front neckline of the “Calypso” gown for an awesome long necklace that ends with the neck line of the gown just right before the belly. The upper part includes one pice on the left side th looks like a part of a laurel wreath  in gold and the right side again repeats the greek colors black and blue. The bottom end of the necklace repeats the same shape that we can see for the earrings. A wonderful set for a greek princess 🙂

Today I am happy to show you another beautiful creation from VictoriaV – Fashion. The “Sophia” bridal gown makes a wonderful gown for the special day like your wedding, but as well a wonderful and stunning gown for a special event. The awesome made textures show the skills of VictoriaV Martiel when it comes to design. She shows very impressive that simplicity can be the key for a wonderful elegant look. VictoriaV always stood for quality and elegance for me and so I am happy to have this awesome designer back on my blog 🙂

For the finale of the Finesmith Muse 2012 we got the theme to be a romantic princess… not my usual style but I tried my best 😉 I know it was some time that the finals were done, but my I wanted to have pictures done by my sweet little sister Falbala Fairey. With all the MVW 2012 she was so busy and I am very happy and grateful that she took time for me and this fantastic pictures. Thank you so much sissy they are fabulous and exact what I had in mind :), you made me look like a beautiful princess 😉

The description for the show we had to write on our own again and I got help from the wonderful Sweetest Sands. She is a wonderful person with a huge imagination and fantasy and awesome writing skills and a nother sister of mine. She wrote me a story that we just had to shorten lightly , so that it could be used during the show. I am very grateful that I have such an awesome support from people who I am allowed to call family 🙂

Many years ago in a far away land there lived an enchanted kingdom deep in the heart of a forest, where both fairies and humans lived together in harmony.  The King was a handsome strong and kind human man, and the Queen the most beautiful sparkling fairy ever seen before.  The Queen’s gift of her sparkle lit the kingdom brightly at night which was important as the all the trees would block the light from the moon and stars above.

The King and Queen lived many happy years together until one day the stars sent them the gift of a special daughter called Princess Wicca, who had the strength of her father, both the beauty and the sparkle of her mother.
One day a great storm befell the Kingdom and for many days the skies rained heavily and the sky the darkest shade of grey that Princess Wicca had ever seen before. The week before Princess Wicca’s birthday the storm had passed, but so too had her sparkle, as if it had been washed away by the rain drops.  The Princess looked everywhere she could but feared her sparkle had been lost forever. The King and Queen called upon all the humans and fairies to help to find the Princess’s sparkle before the twelve hour of the day of her birthday, in return they would reward the gift of as many Finesmith jewels as they could carry.

Everyone in the kingdom set out to find the Princess’s sparkle, with humans searching the land and fairies searching the sky in hopes of being the lucky one to find it.
From one nearby kingdom, a handsome charming Prince decided to join the search in hopes of being the winner.
Days passed and hopes of finding the lost sparkle of Princess Wicca began to seem but a distant dream and many stopped searching, but the Prince seemed determined not to give up searching even the smallest flowers and tallest trees.

The day of Princess Wicca’s birthday arrived but the joyful day had no meaning for her with the great loss of her sparkle.  She was wearing just a simple white gown from Tres Beau, ornamented with the “BlackBarbie” train and her favourite Finesmith jewelry. The “Winterflower” earrings, her “January” necklace, the “Kagami” ring she got from her father as she was born and a little “Snowflake” brooch. Her parents tried their best to give her hope even though there was but a few minutes from striking twelve.

As the Princess turned her head to look into the distance as the clock began to chime, she noticed a handsome man carrying a gold chest with a velvet ribbon tied around it walking towards her.  With bated breath she stood perfectly still with the great hopes of it being her lost sparkle.  The man knelt before her “Princess Wicca, it is with great honour I bestow upon you the return of you once lost precious sparkle.” And with that he placed the chest before her, eager to see it she pulled hard on the ribbon and lifted up the lid of the chest as fast as she could, and there before her very eyes was indeed her found sparkle of light.

The Princess danced around and around laughing out loud now reunited with her once lost sparkle, the Prince admired her beauty.  Both the King and Queen overwhelmed with joy presented the Prince as many jewels as he could carry and joined their daughter in the celebrations.