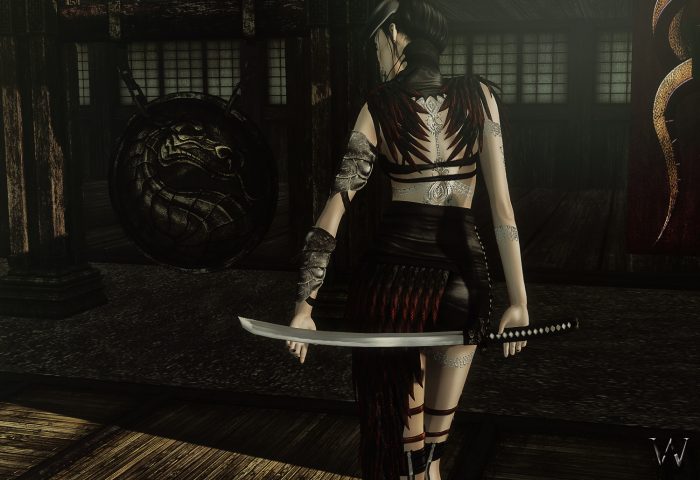 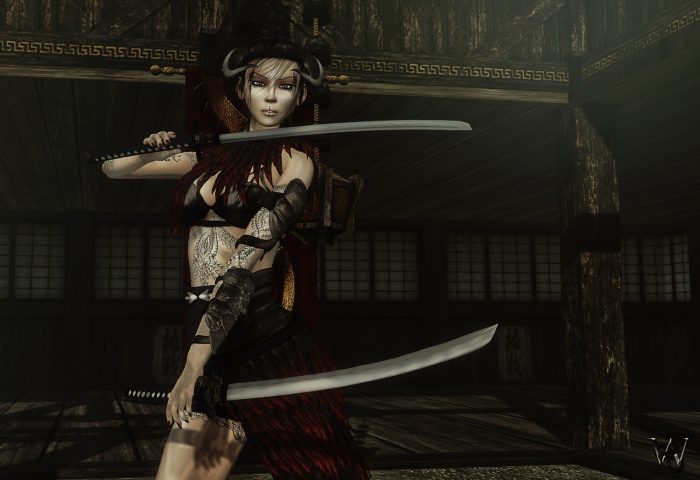 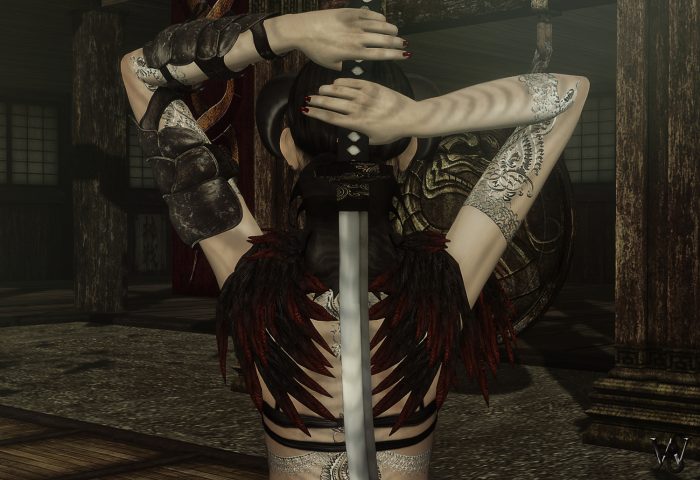 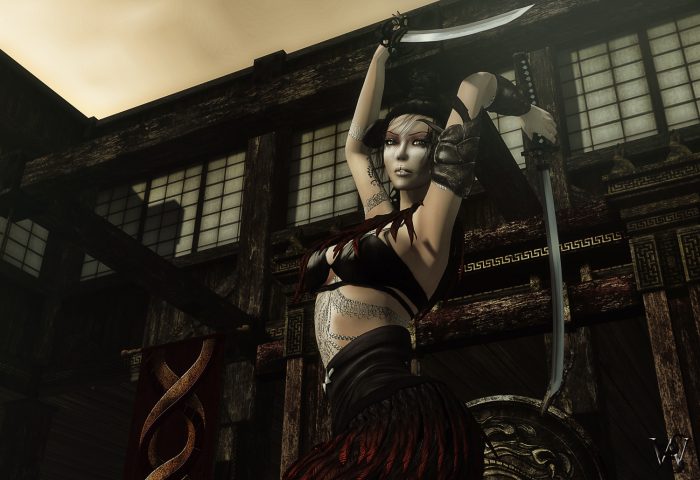 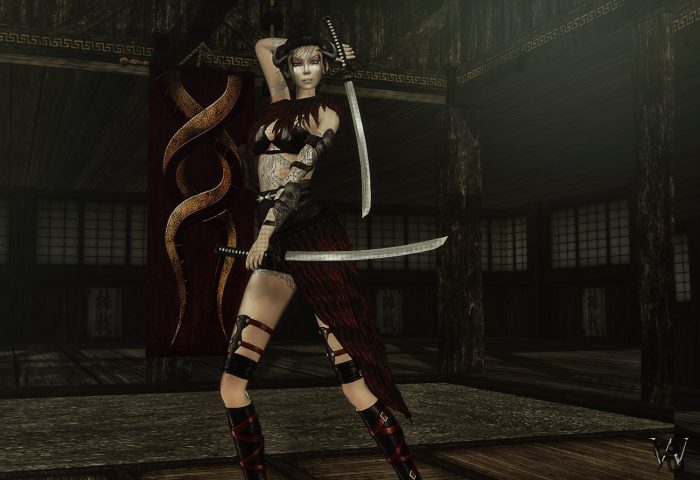 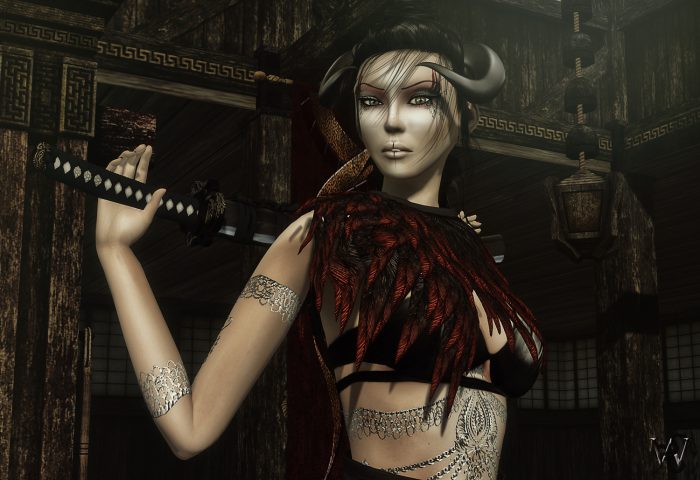 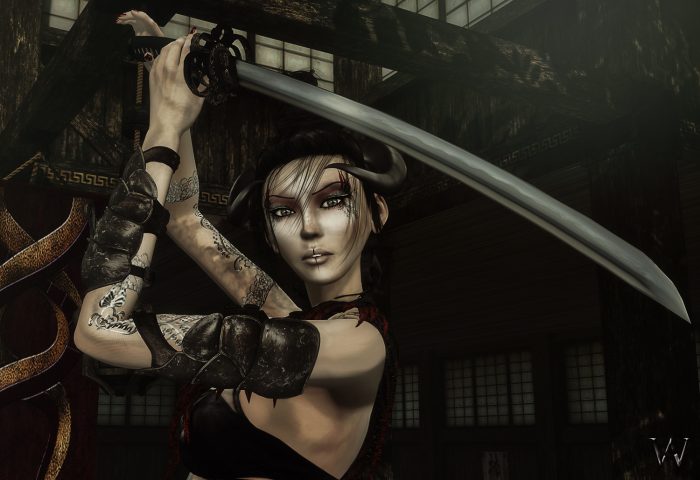 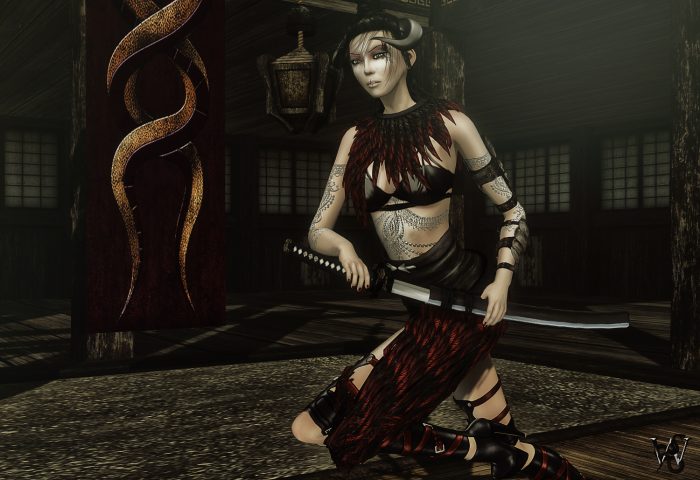 Lately my sweet little brother Dahriel, owner and creator of PosESioN, came across that we both liked a lot what the other did and we talked about to do some pics together. I adore his picture skills for a very long time and I was very happy, when he told me he would love to do some weird stylings and art with me together. All of  sudden he IMed me if I could style anything with Mea Culpa and purple, as he wanted to wear the “Illusory Wisdome” outfit from Mea Culpa. I was thinking on one of my long time favourites of Mea Culpa, the “Hopeless Illusion”. It was one of the very first creations of Tatanka Kaligawa, owner and designer of Mea Culpa. For the poses we used some of the latest releases of PosESioN. As Dahriel and me got dressed he rezzed one of his new skyboxes for the picture and I got huge eyes… The whole skybox was in purple and black and had a look like it could have been a location of a Tim Burton movie! Dahriel and me discovered that we both like Tim Burton a lot – another thing we share as so many others, that we discovered before and I felt even more how much I love my little brother 😉

For the next picture we decided to go with one of the latest releases from Mea Culpa, the “X-treme Mirrors”.

The “X-treme Mirrors” is part of the X-treme line of Mea Culpa, a special line, that combines fetish elements with high fashion designs. Again Dahriel rezzed one of his various skyboxes and again it was perfect for the whole scenery… he has the eye for the special detail. More and more I enjoyed our evening that we had together… all the stylings, like for the “X-treme Mirror” I had an idea and he came up with another one, or the other waxy round and we started to mix and match our ideas according to the other… I felt like in heaven. The wonderful mirrors on the “X-treme Mirrors”brought us to the idea to make the picture like there would be a mirror in the middle of the picture. Dahriel mirrored the pose he had for himself and the room as well and with all the amazing details of the “X-treme Mirrors”, the glasses, the wonderful headpiece and the amazing textures the whole picture became art for me.

Dahriel got he wonderful “El Matador” outfit from Mea Culpa and I had immediately the idea, the “Oppressive Prophecy” would make a perfect match for another couple shot with Dahriel. The gold decorations of both outfits are just like made for ech other. Both outfits have a black basic and with all the amazing prims of the “Oppressive Prophecy” I go the idea of if a fashion matador and his fashion victim. Dahriel loved the idea and started immediately to create the perfect pose. As we thought about a location we agreed because of all the black and gold tines we wanted to have sand and rocks with kinda an arena style for the amazing “Matador” pose from PosESioN.

I would like to thank my little brother Dahriel for an amazing afternoon and evening. For a long time I felt the first time that there is a soul that is somehow connected to mine with all the weird stylings and picture ideas. Our minds are so close that sometimes it scares me 😉 , but I could not think of a better little brother than Dahriel! This was a wonderful and amazing time with such incredible pictures and I really hope that this was just a start and we can do many more like this little brother!!!