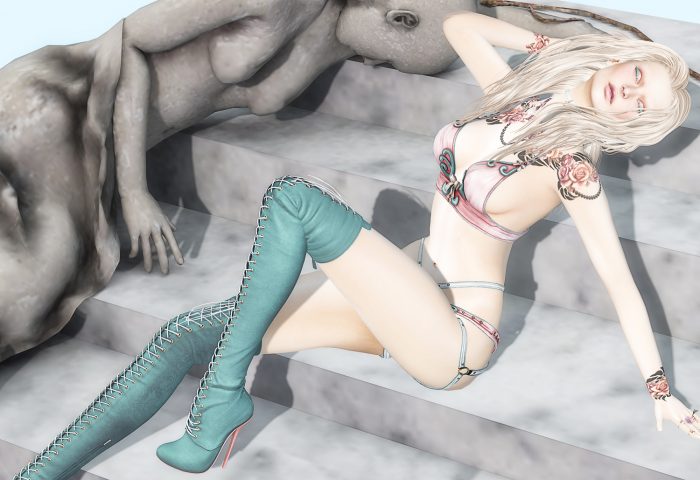 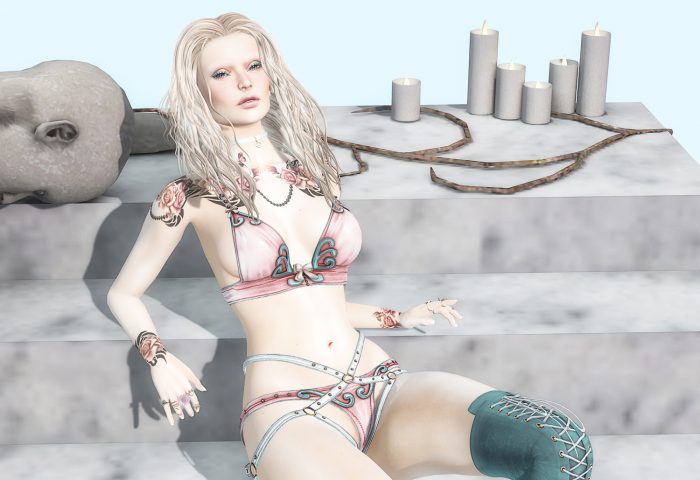 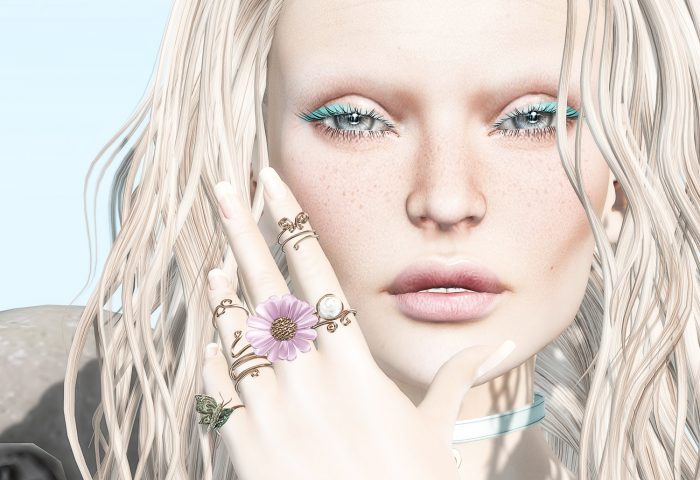 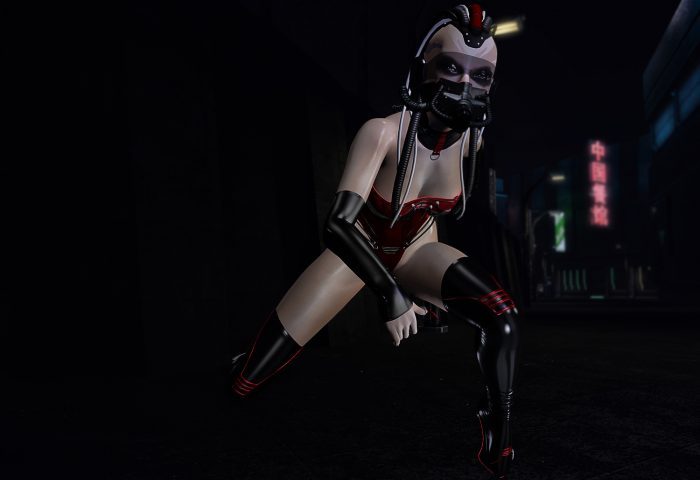 The corset, as well as the boots, have the typical A&Y HUD to color customize many different parts. I am still amazed, how awesome that HUD works. It kinda already feels cybernetic, when you put the HUD on and then you connect the HUD with the item you want to customize and see the percentage running up to 100%. When it reached the maximum you can choose the part you want to color and then you are able to select what ever color you want depending, which the HUD/pack you bought – either one color with 2 different shades as base color, or you go for the complete fatpack.

I do have to admit cyberpunk is something right down my alley. I love the idea of cybernetic body parts, the vibrant colors paired with black do have a very energetic feeling for me and the idea, that in the future we all will not be perfect anymore and have several mechanical/electronic parts to survive is kinda interesting. That would create a whole new vision of beauty 🙂

In SL modeling we always were taught to never hide our faces, but for cyber or cyberpunk looks, huge glasses and masks are so much fun! To be honest, I always had a tendency to not listen to “rules” if they did not make sense for me 😉 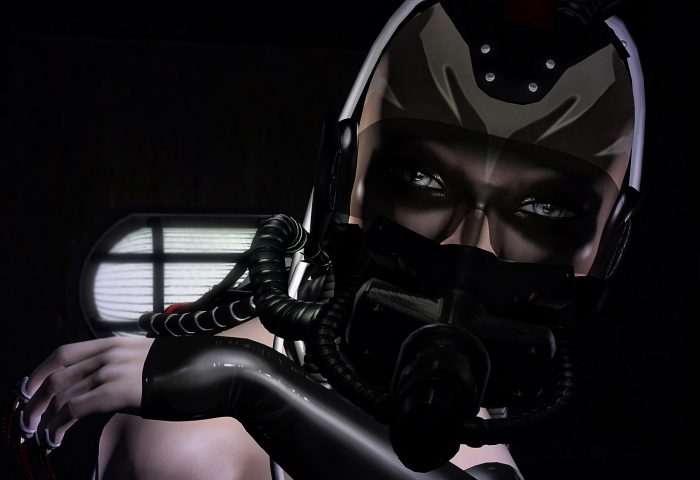 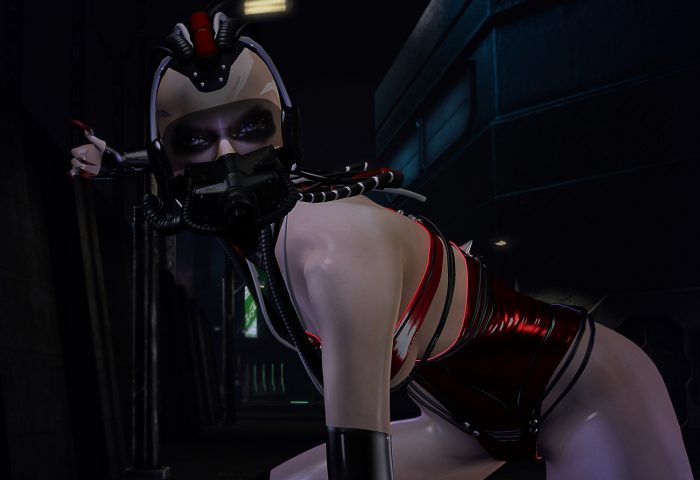 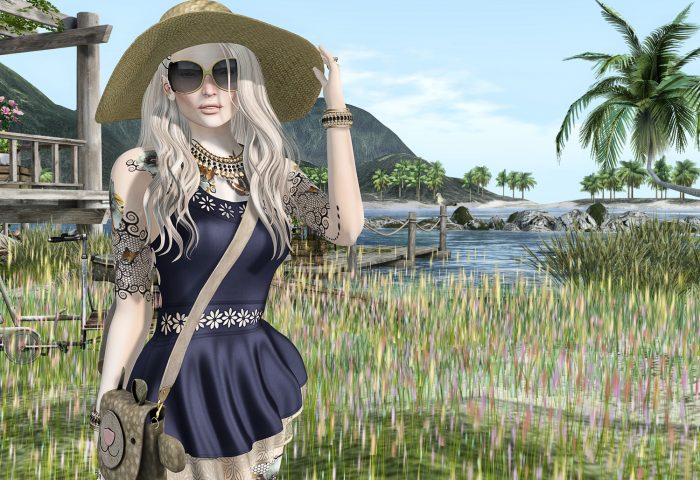 We’re not bad people
We’re not dirty, we’re not mean
We love everybody but we do as we please
When the weather’s fine
We go fishin’ or go swimmin’ in the sea
We’re always happy
Life’s for livin’ yeah, that’s our philosophy
[Mungo Jerry] 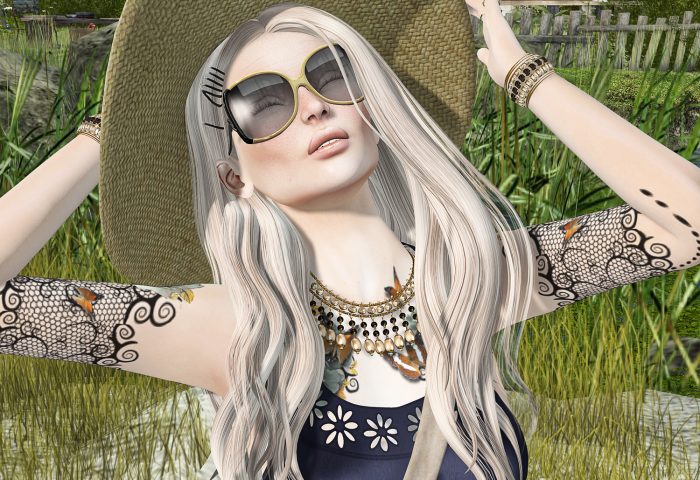 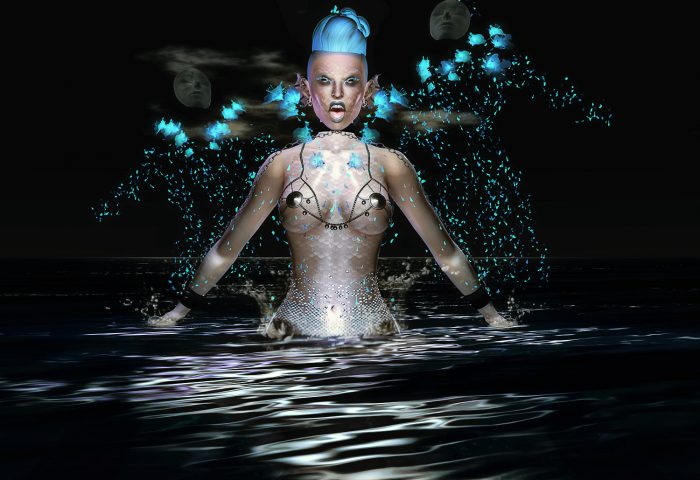 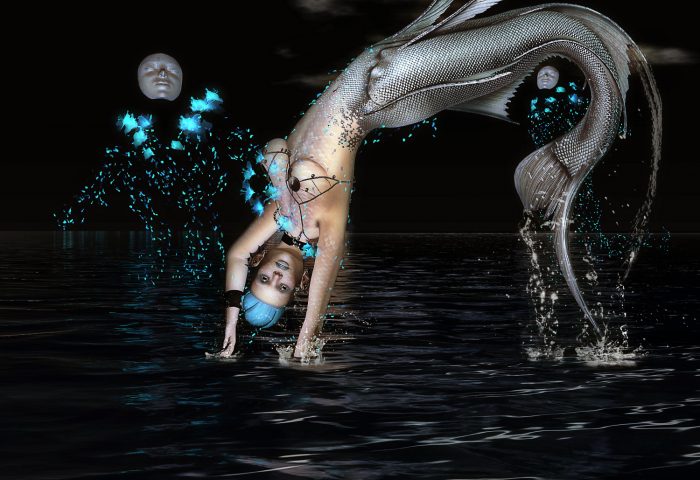 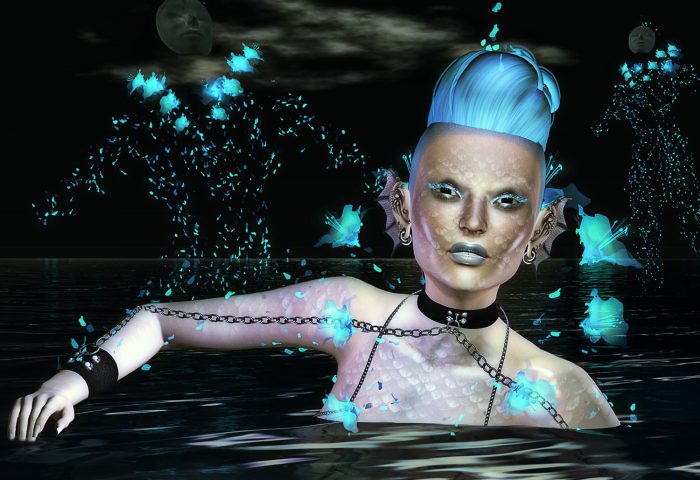 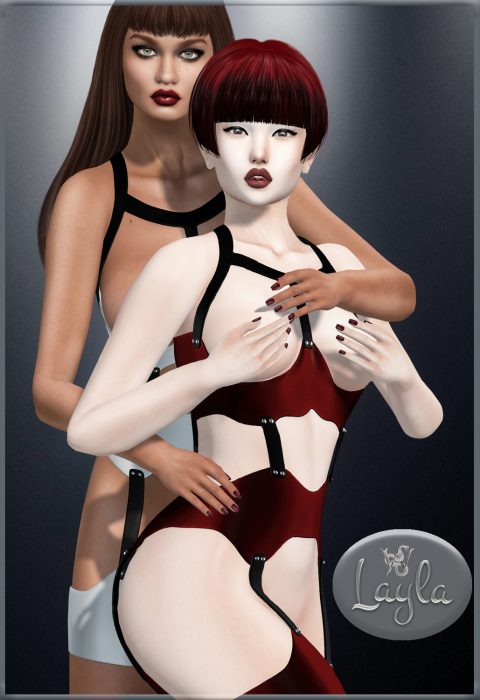 For this round of ROMP we have the very revealing Layla body.. This unique ensemble puts a whole knew spin on “barely there”. It is striking and provocative and will certainly make those around you sit up and take notice. The Layla body is a one-piece original creation that comes with a HUD that offers you 10 colors and 6 metals. Our Layla body is designed to fit Maitreya only. 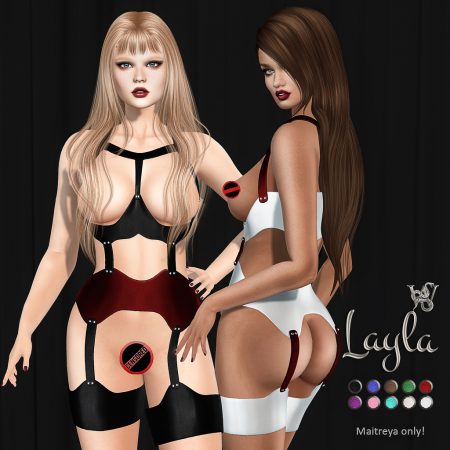 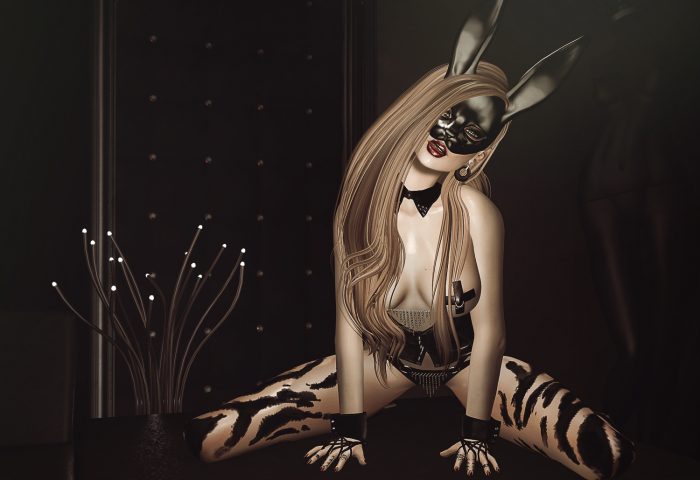 I do not know what it is, but something changed in the past month for me when it comes to taking pictures. I worry about a lot of things, I never thought about before, I do like playing with lights, projectors and “no light” or “low light” windlight settings. The less light you have around you, the more control you get about the lights around you. In the past I first chose my windlight and then added one or two lights or projectors – lately I do it the other way round. I first set up my lights and then look for a windlight, that supports my idea. In the beginning it felt weird to set up out of the darkness, but it becomes better with each try. As well I discovered different desires, which I would like to have for my pictures and so I started a few new “learning projects”. I watched a lot of tutorials, practiced a lot and learned many new things.

One project that started – I tried to start that, since my vacation had begun – was to paint hair. I do have a graphic tablet forever but besides using it for textures I never touched it for pictures, as my mouse felt so much better with that. But try to paint hair with your mouse.. even if you really think you can control your mouse perfectly, but things like the pen pressure, I only get with the tablet. I forced myself to play with it and watched many tutorials. Slowly it starts working, but it really needs a lot of practice and I am not yet ready to show it off  more than a few strands of hair 😉

To not loose my motivation, I started to play with some ready made hair strands and wisps as well as hair brushes for Photoshop, as those as well helped me a lot to understand the basic hair drawing. When I found the strands from Rayne Morgan, I was completely speechless. I rarely saw such a well drawn hair in all it’s details and if you are willing to credit her work, she even offers a few free downloads on her Deviantart site (https://www.deviantart.com/raynemorgan). 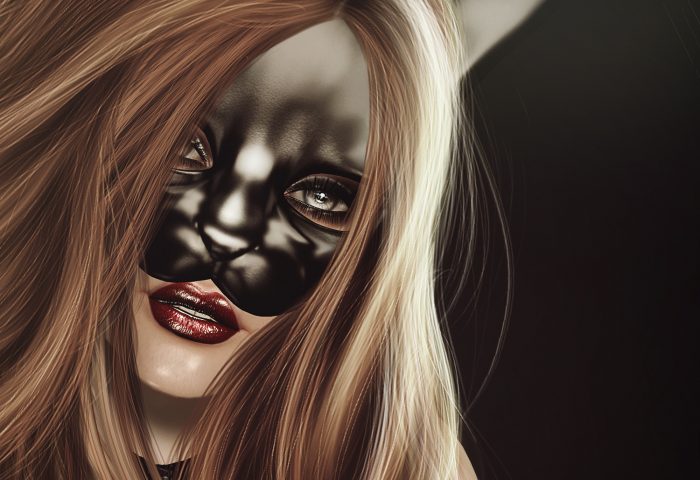 There I found some interesting ready made hair as well for instant use. I always had wondered, how some photographers were able to paint or photograph hair and have such amazing results on Flickr. When I saw the website of Rayne Morgan… I immediately did know how a few did that 😉

It is really breathtaking how that hair can change a Second Life picture like it did for the closeup above. You get the hair as a PSD file. You are able to color and as well warp it, until it matches your Second Life snapshot. I could not resist, to even work on that one by adding some more wisps and paint some little strands myself. It is not the end of my hair-paint experiences, as I really want to archive painting my own hair completely one day, but I wanted to share the progress and as well the way of keeping up my motivation to do so 🙂 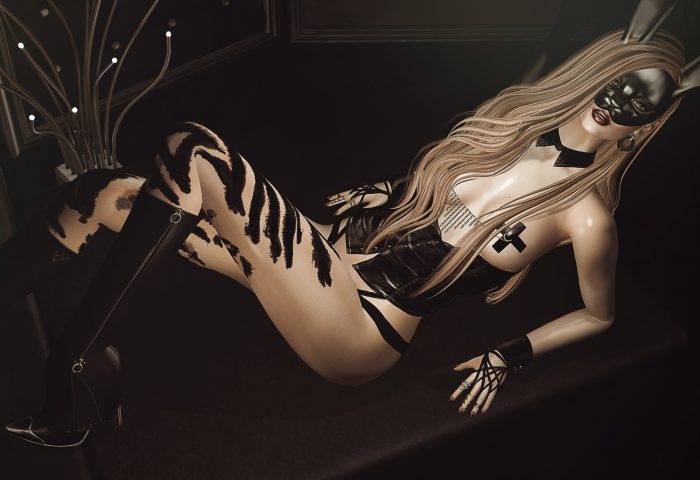 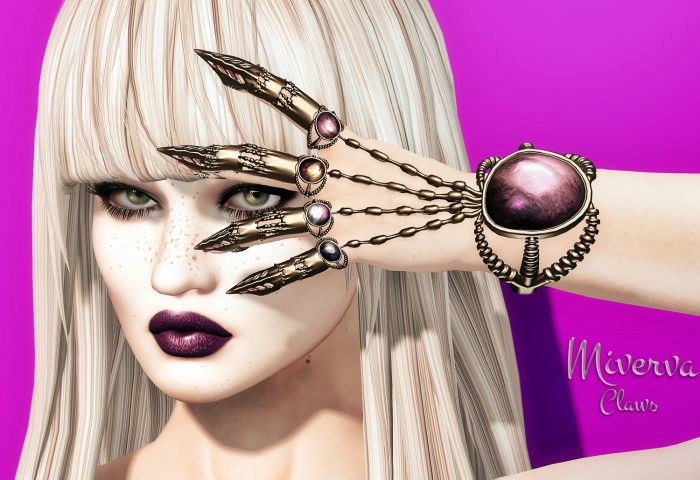 Panic at the Zoo is the theme for this round of The Secret Affair. We let our inner fashion beast out with the Minerva Claws, a must-have statement piece of jewelry for your SL inventory! The Minerva Claws HUD gives you a wide array of options. Not only do you have 6 metal and 6 gemstone colors, you can choose which parts of the claws you want to show or hide. That includes all fingers parts, the connector on the hand and as well the bracelet. You also have the option to wear the claws only on one hand or on both hands, all via the HUD. The Minerva HUD provides so many options we had to make it a two-sided HUD! You can try out the Minerva Claws at the event, so you can get a taste of how versatile they are before you buy.

The Minverva Claws are made for Maitreya Lara Bento only. 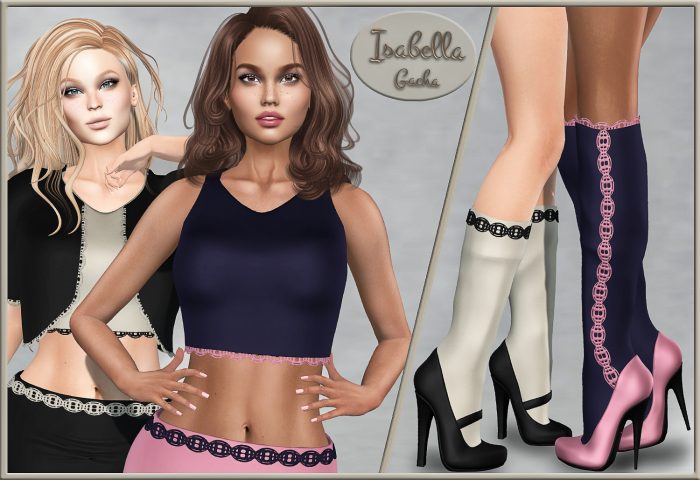 For this round of the Gacha Garden we have created Isabella. This flirty set offers 2 rares and 15 commons. Rares come with a full color HUD for all parts of the item, commons have one basic color and only a mini HUD for laces (1-10) and for laces & socks (11-15). 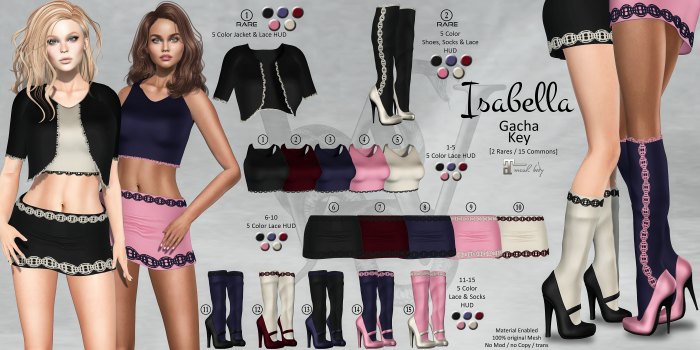 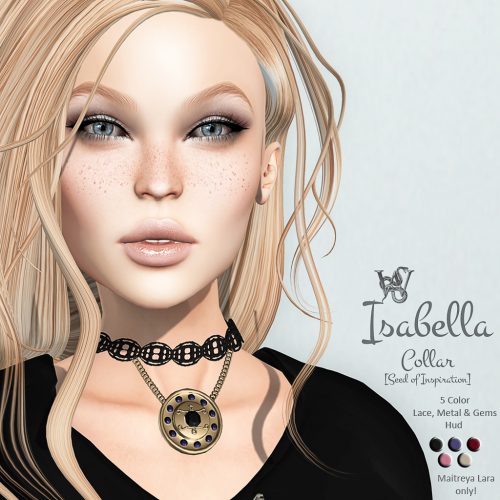 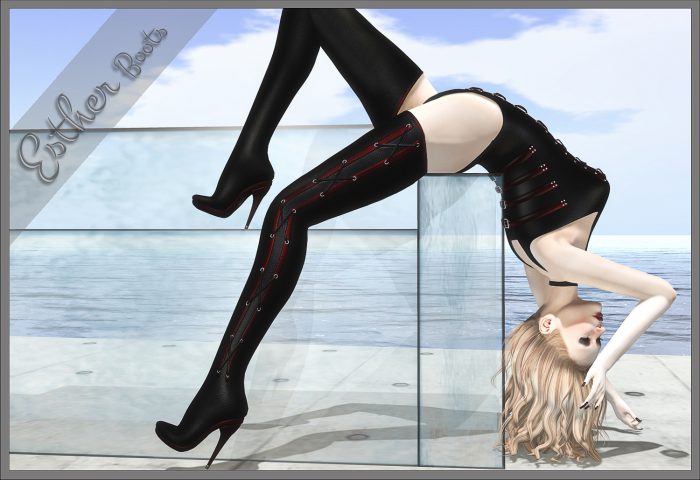 It’s MBA time and we have our Esther boots up for grabs. These ultra high boots are made for Maitreya’s Lara, Slink’s Hourglass, and Belleza’s Freya. Esther comes with a HUD that gives you color options for the boots, straps, laces & sole (10 leather colors / 6 metals colors). Our Esther boots are a great match to Nichole Body, which we are currently offering at the Fetish Fair. 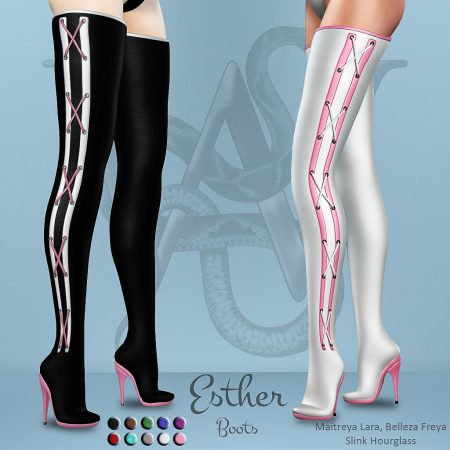 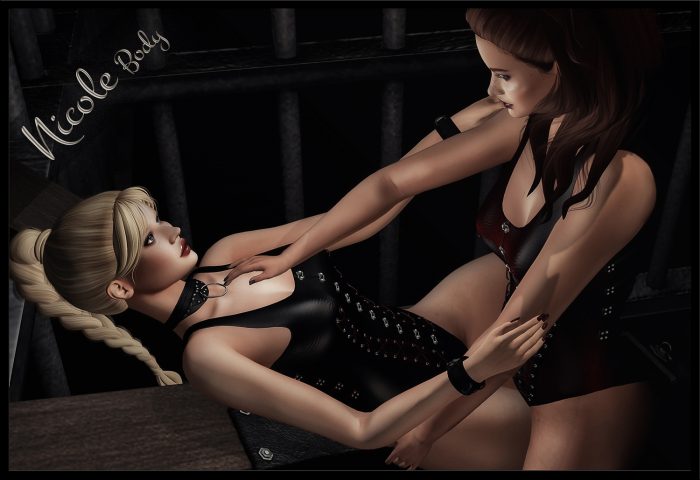 Our Nichole Body is our entry into this round of the Fetish Fair. This leather bodysuit is accented with buckles and lacing that make it not only sexy but interesting. It is a perfect match to our Esther Boots that we are currently offering at this round of the MBA. The Nicole Body comes with a HUD for body, straps & laces (10 leather colors / 6 metals colors). Nicole is made for Maitreya’s Lara, Slink’s Hourglass, and Belleza’s Freya. 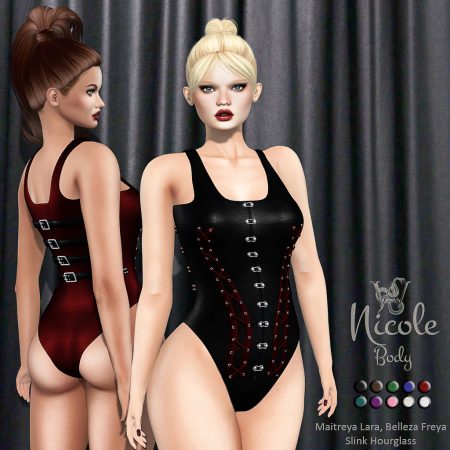