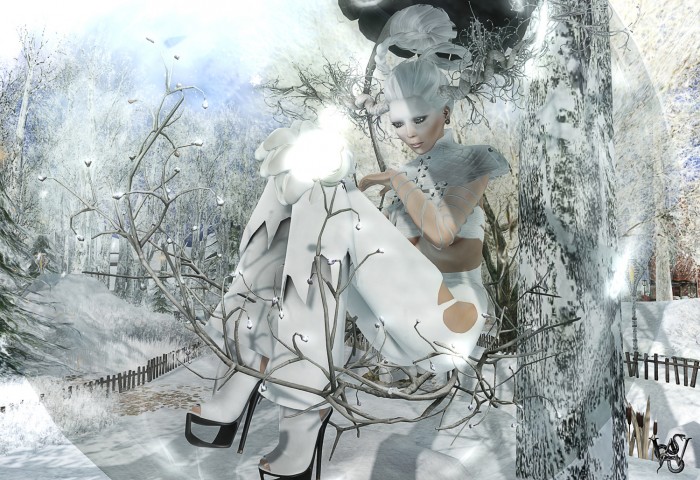 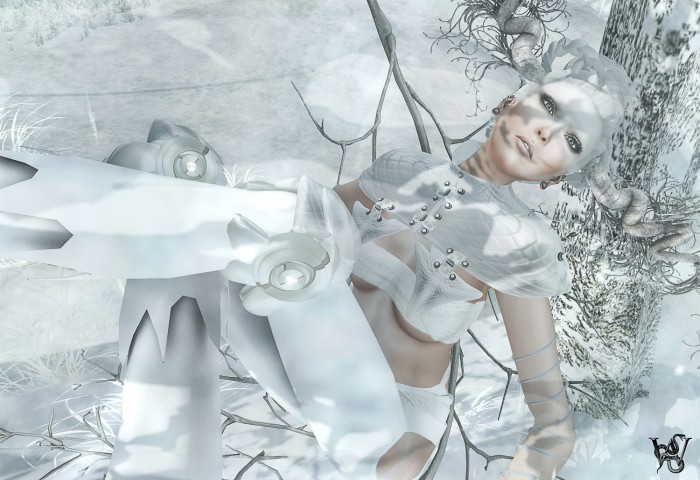 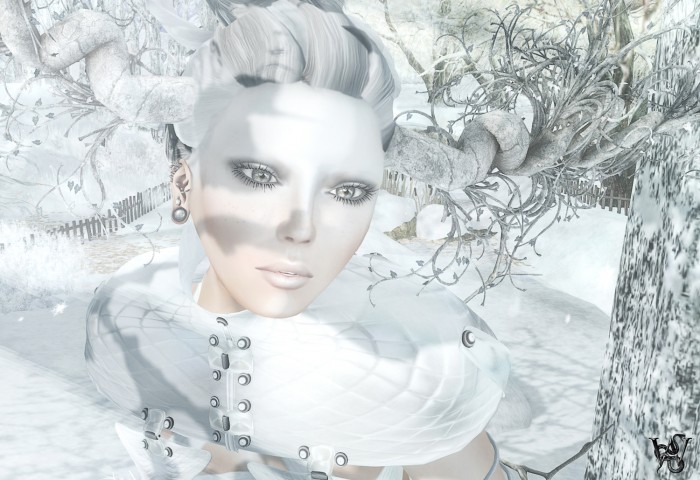 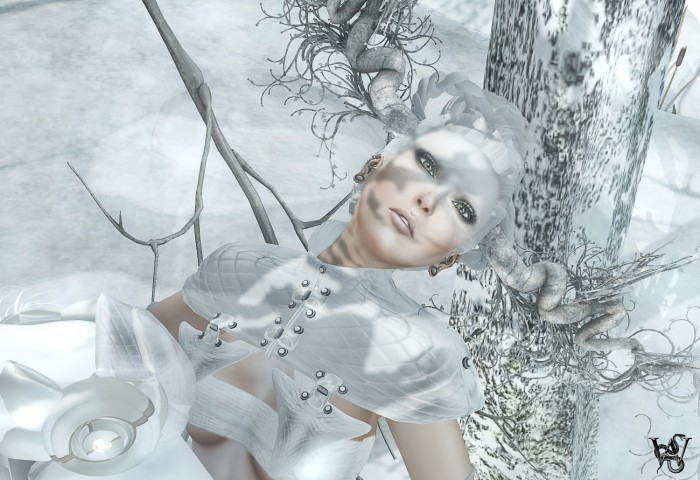 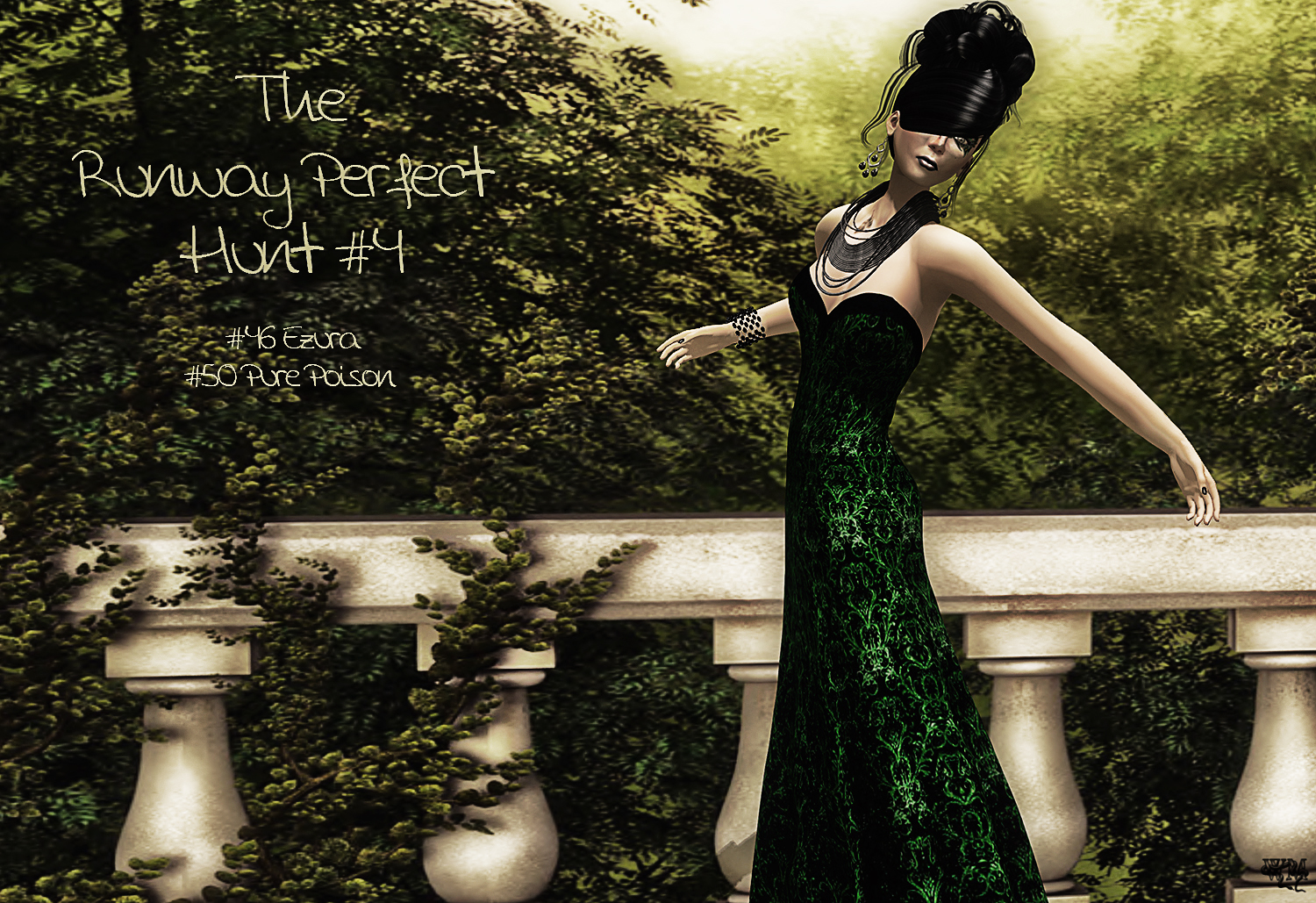 The Runway Perfect Hunt goes in it’s 4th round

. Morgane Batista again made it, to get amazing designers to participate in one of the most famous hunts on the grid. Even if the title says “The hunt with models in mind” does not mean this hunt is limited to models only. All the amazing and versatile designs are amazing additions to everybody’s wardrobe, even the males will find some amazing hunt prizes in some locations

This year the hunt is not a total freebie hunt, each hunt item costs $5 Linden. With a total of 50 shops you reach a maximum of $250 Linden, what is a great amount for so many amazing quality designs!

Till Friday TRPH #4 does last, then all the amazing items will be gone… So I will use the chance for my final post about this amazing hunt.

My final styling is based on the amazing contribution of Ezura to the Runway Perfect Hunt. Ezura made the beautiful “Velvet Long Gown” in dark brocade green. The basic dress is mesh made and you have a wonderful optional flexible skirt attachment as well. For this post, I decided to go without to show the basic mesh prim a bit better, basically you get 2 gowns in one 😉 The shoulder free gown is perfect for a formal or elegant attire. With the free shoulders it lets room for amazing jewelry.

Speaking of jewelry, I would like to drag your attention over to the earrings. Pure Poison made a wonderful pair of earrings for the hunt. The silver earrings with the black gems made a perfect accessory for the “Velvet Long Gown”.

For the hair I decided to go with the “Chevia” hair from EMO-tions to underline the elegant look of the styling. 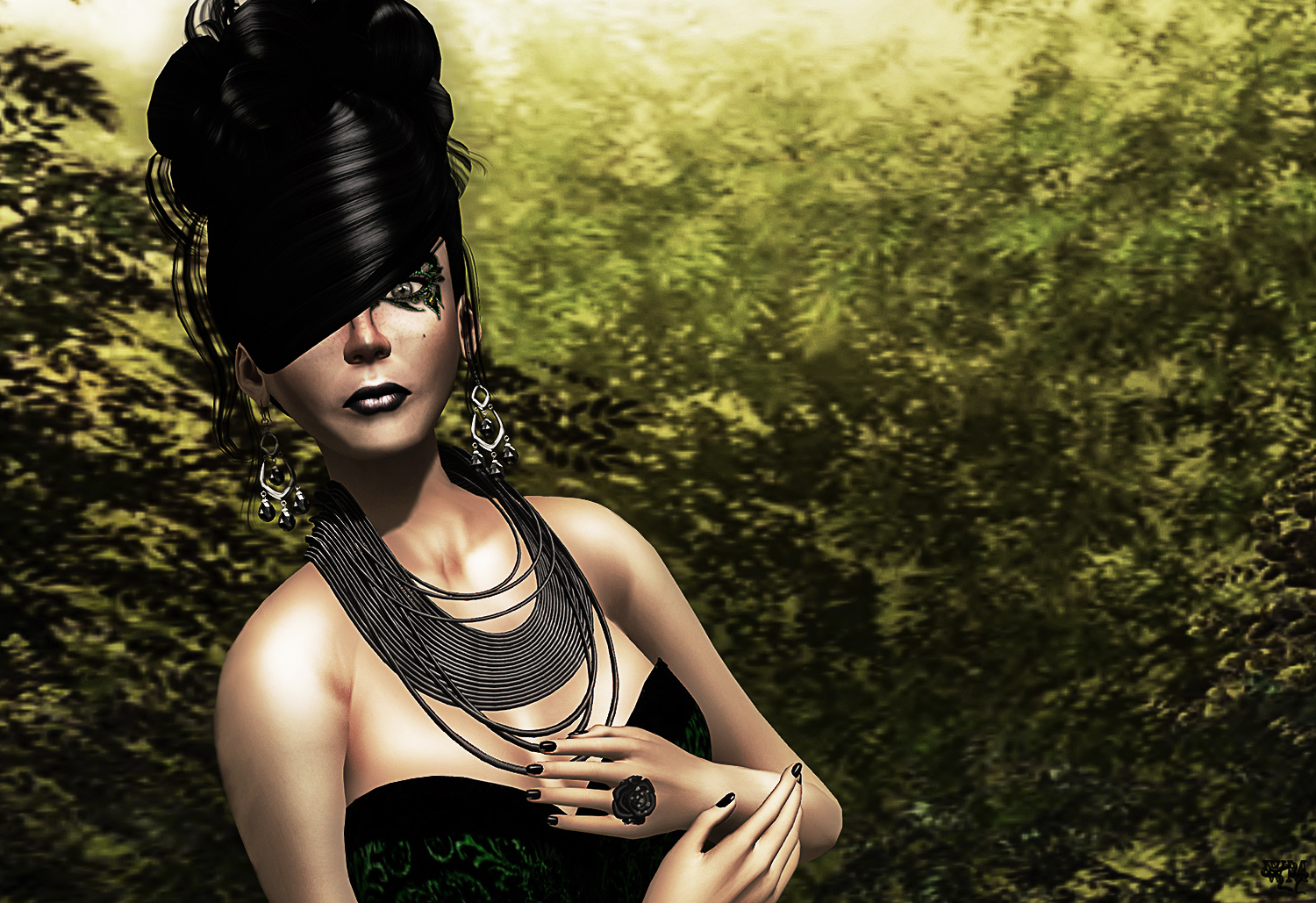 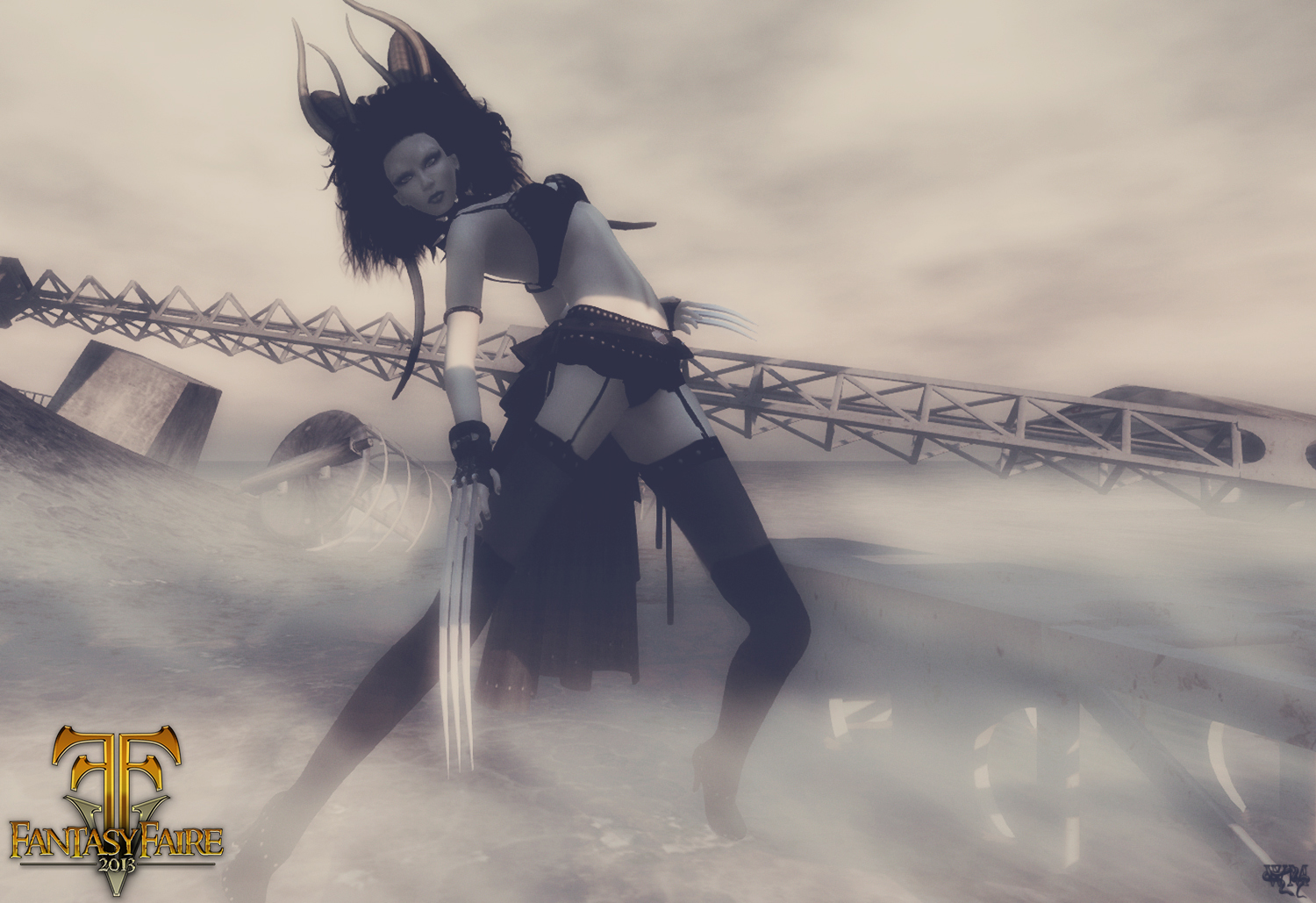 Today the Fantasy Faire 2013 opened. Until the 28th of April, when it ends, you can find amazing creations various designers made for themes like fantasy, role play, steam-punk and Sci-Fi and all that is content of dreams 😉  Incredible builders created awesome sims for that event where you can make fantastic pictures or just explore and get caught away in your dreams and imagination.

The Fantasy Faire is one of the most huge events that take part in the RFL. RLF – Relay for Life – is a charity organisation that supports the American Cancer Society.

The whole event takes part on 10 sims. The are arranged in a nice way with a path that you can follow to explore all of them. On 8 you will find the creations that were made from all the designers to support the RLF. The last 2 sims are the event sims, where presentations, music events, concerts, auctions and silent auctions take place. To make it more interesting for visitors, a super amazing hunt is taking place where you can find many incredible little items.

Today I would like to start my little row of Fantasy Faire 2013 posts with the contribution of Ezura.

The base is the amazing “Fanatsy Velnyra” outfit. It kinda is a ready to wear outfit as it contains all visible parts like the bra, the stockings, the skirt, the cuffs and as well the panties. The amazing mesh “Thigh High” boots are the second item for the Fantasy Faire. The long over-knee boots underline the sexy touch of the outfit very well ;). What really caught my attention are the super cool gloves with the looooong blades that reminded me about Freddy Krueger :p

So make your way to the Fantasy Faire 2013 (http://slurl.com/secondlife/Fairelands%20Junction/128/128/23) and help while you buy all those amazing dreamy fantasy items! 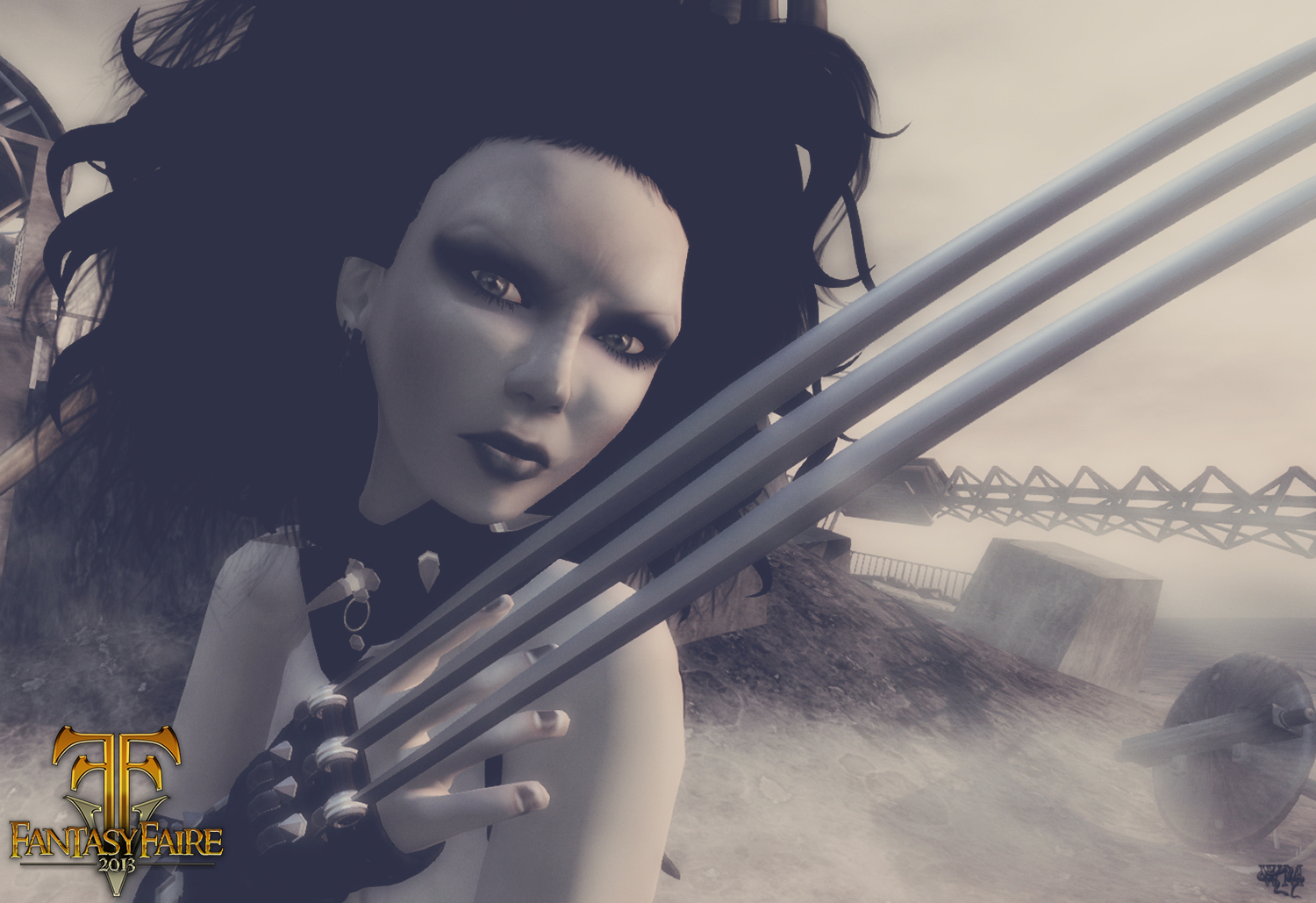 You all know how it is with famous brothers, everybody knows them. But did you know that Pinocchio had a little sister? After he met the sad Fairy on his journey, she felt lonely. She decided to ask Master Geppetto to carve her a doll she could bring to life and raise as the child she could not have any other way.

The dollmaker granted her wish, because she helped his son so much to find the right way and finally become a real boy. He carved the most beautiful doll and gave it to the fairy. She was overwhelmed when her little doll came to life and promised her to make her Pinabella a real girl when the dolly had proven her character.

When the doll grew older, the fairy was pleased how her daughter turned out to be. One day, she talked to her about making her a real girl. Pinabella did not know what to think of that, because she never felt wrong about being what she was. But as it seemed to be important to her mom, she agreed.

They went to a nearby lake to transform the doll. The fairy gave her the kiss of life. She had thought her power to create life was endless, but alas, it was not. As she watched her daughter turning into a beautiful young woman, she saw her eyes widening with shock. Only then she realized her own spark was fleeing her body and she was vanishing from this world to enter the next one. She only managed to tell her daughter that she loved her and to be as good a human as she had been a doll.

The girl stood there shattered her mother had left her. Thus, losing her life for hers. Only when the first shock left her, she cried bitter tears of loss and loneliness. From that day on, Pinabella went to the lake every day to cry for her mother. And sometimes, when her misery was just too much she heard her mother‘s voice in the wind, soothing her like she had always done: „Hushhhhhhhh.“

Poses: In-Pose – “Sad Wicca” (Trinity… again you helped me as I was despairing with making and searching poses for this post. Thank you so much for being you, a friend of mine and being there for me  🙂 )

Story: Malicia Python (Thank you so much Malicia, you are a never ending ending sea of inspiration, ideas and kindness. It is an honor for me to call you a friend 🙂 )