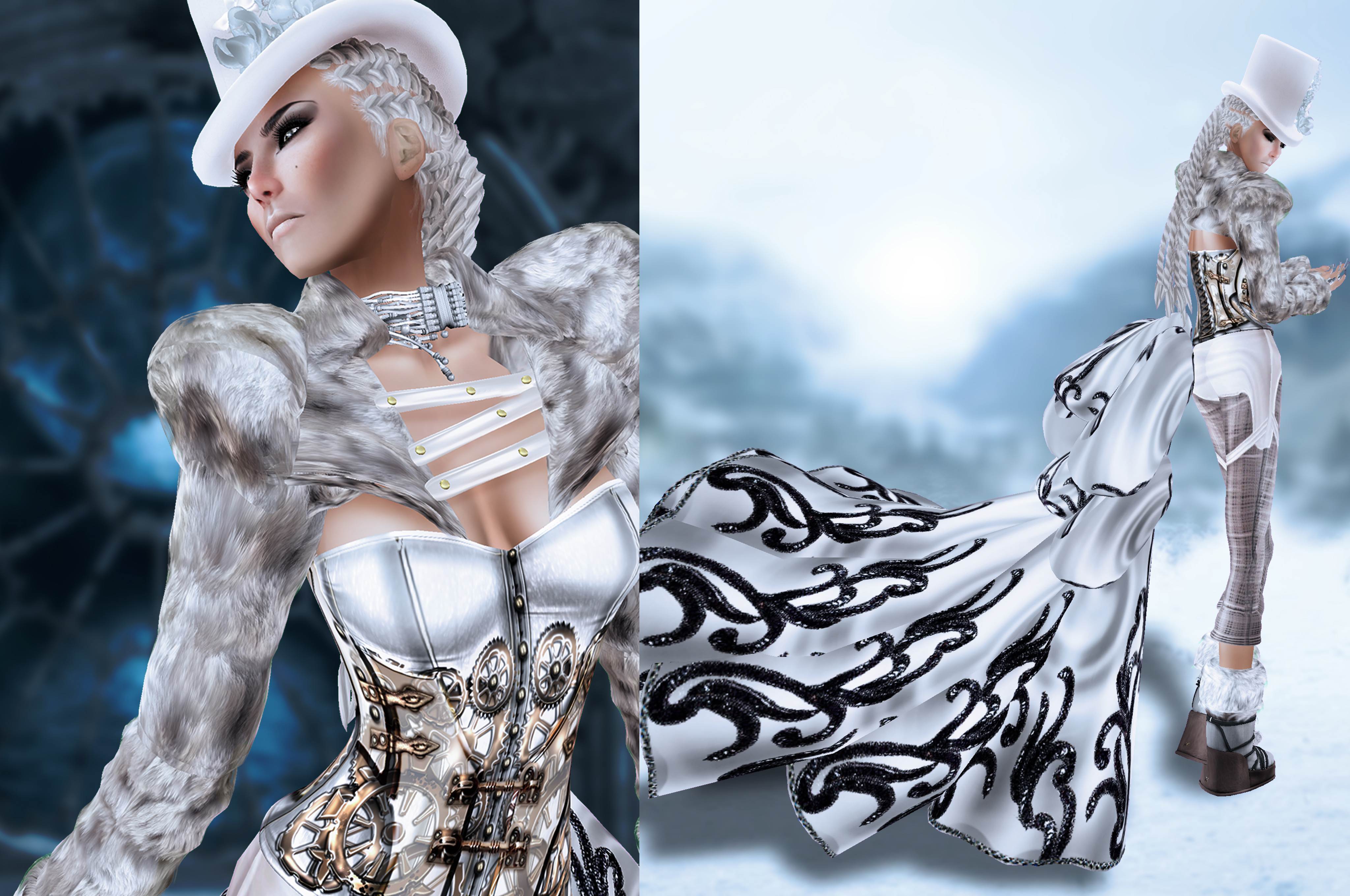 END_OF_DOCUMENT_TOKEN_TO_BE_REPLACED

30th of January… 2007 I was born in SL and now we have 2012… 5 years in SL, that’s a long time. I usually tend to forget that date as I did today. I realized it as the clock on my computer turned to 1AM and the date switched*grins*. So, today.. or better yesterday, I spent my SL day with styling and making pictures… like mostly*lol*. I had an argument lately with a few ppl about corsets. Some wanted to tell me corsets are fetish, others told me they are porn and some said corsets are lingerie only. But I disagreed and still do. Corsets came from way in the past before we had all those fancy leather and latex stuff and they were part of awesome medieval gowns for example.

So I took myself to a challenge that I can wear corsets without any touch of all that prejudices and create a modern non avantgarde look. Ok I admit… it turned out in some postapocalyptic again lightly but that might be because of my favour for this kinda pictures *smiles* Maybe if you just put the whole outfit in a different scenery it looks different again, but the big hoodie on the “Anath” jacket of Miamai. The rats that are placed over the shoulder just underlined the feeling of the day after a worldwide catastrophe where you just wake up and try to survive, maybe try to find other people and some food. The white corset comes from NV Corsetry. I discovered this store over 2 of my sissies, Lexie and Lorelei. The introduced me to Khurt Vhargon, owner and designer of NV Corsetry. He makes a very new kind of corsets, fully scripted to resize them in every direction. You can choose if you only wanna make it longer or wider and not just resize the full object… really an innovation for corsets in SL. As well he created so many different styles and different fabrics that you really get in trouble if you visit his store as you have a hard time to choose. The newest addition to that corsets is, that now he can help you fit the corset as well if you cannot do it on your own with a remote control of the script. That means he can operate the script while you are wearing his corsets. I only saw this technique at BAX before for the boots and it will be really helpful, if you are not yet that experienced in SL with fittings and scripts and still wanna wear one of his amazing corsets 🙂

For the pants I chose one of my all time favourites from LeeZu, the “Madison” pants. The earrings and bracelets come from Finesmith and the face tattoo from White Widow, as well favourite stores of mine 🙂 The skin is made by Malicia Python, owner and designer of Silken Moon. She made me this special makeup for the “Rookie” skin, called “Childhater” as I wanted black lips and dark smokey eyes. One example for the great custom makeups you can get from Silken Moon 🙂 As I had to walk through water for that post :p the water swallowed the cool “Pomski” boots from Kookie…

And so I will bring the box I found, in the water at the beginning of my post,  back home and see what I got…

Yesterday I visited Azlyn Vaher, owner and designer of Yasum,  as she wanted to gimme a sneak peek on her new store and as we were walking through I got stuck on this great pants…

I remembered the cute “Simple Cozy Sweater” from Kyoot, that I bought on one of my last shopping tours and it just looked right for the look I had in mind. The “Armada Boots” from Kookie with the cute socks as well matched the look. The whole look remembered me of being at the university way in the past so I had to add this sweet *Leather Messenger Bag” from HOC to make the illusion complete :p.

Yesterday Journey McLaglen, designer and owner of Prism, showed me her new store that will be opened on the 1st of October and I have to say an amazing new and shining store. For sure you will find many of the well-known Prism outfits but as well some brand new out of her new Fall Collection 2011!

For example the “Gabrielle Sweater and Pants” that I am wearing for this blog post. This combination is perfect in colors and style for the actual season. The great paisley printed fabric is, as always, hand printed by Journey herself. She has such a perfectionism that every of her creations are a little piece of art.

The sweater comes in 2 different versions. A short and a long one so you are prepared for every weather situation 😉 Do not miss the grand reopening of Prism on the 1st of October 2011 🙂 and see all her new and long time favourite creations in a bright new light 🙂

Monday and the work is back… sweet memories of the weekend start to fade and the everyday life comes back… So what to wear on a cloudy monday autumn day?  With my LeeZu addiction… yes I know all of you know that already ;)… for sure it was a new mix and match of things I like for longer and the latest releases by LeeZu 😉

So for the top I chose the “Mailiin” blouse in grayolive. A short-armed blouse with awesome ruffles in the front 🙂 The top is hold by 2 thin lined also bound to a ruffle in the neck and a nother sweet line on the back make sure that the top does not give any peeks on parts you do not want 😉 For the pants I took the new “Madison” pants in rust. Perfect match in autumn colors… 😉 For the shoes I took out the great and very comfy “Armada” boots from Kookie. With the warmers on the ankles a perfect match for the season too 🙂

For the accessories and jewelry I put on the “Africa” set in bronze combined with the matching bangles from YS & YS. The hairstyle “Krea Updo”  and the hair base are made by Miamai and the amazing skin comes out of the feather of Emilia Redgrave, owner and designer of Redgrave 😉

The first 3 pics I did by myself and for my last one I want to say a big thank you to Helenna Baxton. She captured an amazing head shot of me that I do not wanna miss to bring in here 🙂 Thanks a lot Helenna for your time and effort!

I hope you enjoyed my little monday blues post 😉